World markets on the verge of panic continue to dismiss the Bush/Paulson Wall Street bailout plan - despite White House rhetoric and supposedly concerted action by the G-7, the group of leading industrialized economies. Top economists criticize the mechanics of the plan, which concentrates too much power on Secretary Paulson and his Goldman Sachs' colleagues; warn of an incoming systemic crisis; and point out the taboo topics nobody is talking about: the US budget deficit and the US military budget.

World markets on the verge of panic continue to dismiss the Bush/Paulson Wall Street bailout plan - despite White House rhetoric and supposedly concerted action by the G-7, the group of leading industrialized economies. Top economists criticize the mechanics of the plan, which concentrates too much power on Secretary Paulson and his Goldman Sachs' colleagues; warn of an incoming systemic crisis; and point out the taboo topics nobody is talking about: the US budget deficit and the US military budget. 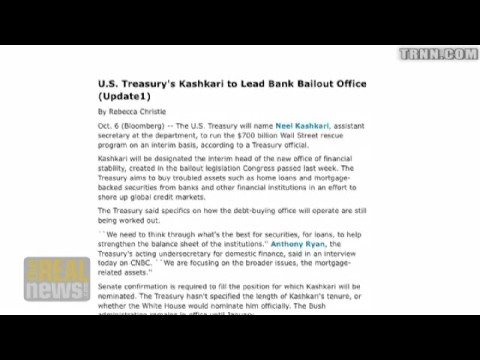 PEPE ESCOBAR, SENIOR ANALYST, TRNN: This is how world markets reacted to the Bush-Paulson-Pelosi-McCain-Obama bailout plan last week. In just one week, no less than $2.4 trillion in paper went up in smoke right behind me. The financial crisis is global. Last Friday, everyone was expecting some solace via the communique from the G7, the finance ministers from the Group of Seven of leading capitalist powers meeting in Washington. Paul Krugman in New York Times said it was written in code. There’s no other way to interpret things like "ensure that our banks and other major financial intermediaries, as needed, can raise capital from public as well as private sources." (The Group of Seven plan of action.) Krugman noted that this is, and I quote, "… the United States arguing with itself, as well as with others." ("Worthwhile British initiative," krugman.blogs.nytimes.com, October 12, 2008.) Then Secretary Paulson announced that the Bush administration would nationalize some US banks—sort of. Will that be enough to calm the markets? Hardly. No one has said a word about the massive US trade deficit. Why? Because it’s taboo. Corporate US offshores everything. And when these products enter the US to be sold, they qualify as imports. With a smaller deficit, the world would not have been so polluted by a hurricane of toxic US financial instruments. Paul Craig Roberts, former assistant secretary of the treasury during Reagan, insists, "the money should be used to refinance the troubled mortgages, as was done during the Great Depression," and he points out that "The US budget deficit can be eliminated by halting the Bush Regime’s gratuitous wars and by cutting the extravagant US military budget." (Paul Craig Roberts, "What is to be Done? A Possible Solution to the Economic Crisis," counterpunch.org, October 10, 2008.) No one is holding their breaths, especially when Paulson [inaudible] Goldman Sachs, Neel Kashkari, to oversee the $700 billion bailout. Paulson still has not disclosed how much of the $700 billion will buy toxic assets and how much will buy equity stakes in banks. What is known is that he will hire five to ten asset management firms to do the whole thing. With the Treasury system, there will be a firewall to prevent conflicts of interest. Talk about the fox guarding the hen house. New York City University professor Nouriel Roubini, who predicted the crisis two years ago, writing at the RGE Monitor, is more Dr. Doom than ever. He says, "The US and advanced economies’ financial system is now headed towards a near-term systemic financial meltdown as day after day stock markets are in free fall, money markets have shut down while their spreads are skyrocketing, and credit spreads are surging through the roof." ("The Financial Crisis: Where Do We Go from Here? A debate at the Council on Foreign Relations," rgemonitor.com/blog/roubini, October 7, 2008.) Roubini stresses that 55 percent of global GDP—that’s the US, Eurozone, UK, Canada, Japan, Australia, and New Zealand—are in recession, plus financial crisis, plus banking crisis. And he warns that anything short of radical and coordinated actions may lead to a market crash, a global systemic financial meltdown, and to a global depression. There’s no leadership anywhere, despite rumblings from the White House. So far, Paulson seems to be more worried about ideology and private profits. The market verdict has been unforgiving. Meanwhile, where is the discussion about the US budget deficit and the US military budget? Where are John McCain and Barack Obama?