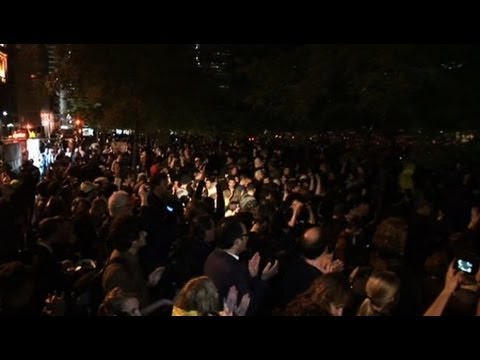 JAISAL NOOR, FREE SPEECH RADIO NEWS: Thousands at the month-long encampment in Lower Manhattan erupted into applause as word spread that Mayor Michael Bloomberg called off his promise to evict the protesters. Owners of the public-private Zuccotti Park had issued a 7 a.m. deadline for protesters to leave, ostensibly to clean up unsanitary conditions. But Occupy Wall Street participants resisted. They organize their own park cleanup and called on supporters for help. Among them was New York City Councilwoman Leticia James. She says this moment marks defeat for the mayor’s administration.

LETICIA JAMES, NYC COUNCILWOMAN: When we are united, we can never be defeated. And that is the message here today. This is a teaching moment to our society, that ideals that we believe, which are embedded and [incompr.] in our Constitution, cannot be defeated. And so to the mayor of the city of New York, obviously you don’t have enough spray and enough jails to house all of these individuals who came out here today. And we stood up today and we stood up against those forces who would like to silence the First Amendment and silence a growing movement.

NOOR: Thursday night, cleaning crews doubled their efforts to sweep and mop the park, where thousands have congregated on a daily basis to meet, share meals, and take part in the participatory decision-making body, the General Assembly. Twenty-one-year-old Niral Shah says he came to defend Occupy Wall Street because he supports a space to challenge corporate domination of the political and economic system.

NOOR: The mayor’s office and park owner Brookfield Financial were flooded by calls, including from local lawmakers, demanding a halt to the eviction. Unions, including the UAW and AFL-CIO, came out in support of the protesters. MoveOn [incompr.] delivered a petition with 340,000 signatures opposing the eviction. Tenants rights organizer Esther Wang credits this victory to the movement’s broadening base of support.

ESTHER WANG, TENANTS RIGHTS ORGANIZER: That’s right. I think, you know, as time has gone on, people have realized that those who really have been most impacted by the economic crisis, really, by decades of systemic oppression and inequality, these are the people who actually need to be involved in the protests. And I think everybody’s understanding that–unions, community organizations, ordinary residents who aren’t, maybe, affiliated with any organization, the protesters themselves. And it’s really beautiful and, I think, positive to really see this movement becoming, you know, more multigenerational, more multiracial.

NOOR: According to police, eight to ten protesters were arrested later in the morning as celebrating campers attempted to march onto Wall Street itself. Organizer Yotam Marom says he expects an even greater turnout at Saturday’s global October 15 mobilization.

NOOR: The mayor insists the eviction at Zuccotti Park has only been postponed and could happen any day. But the protesters say they will continue to be ready to block any such action and vowed to remain in the park through the winter months. Jaisal Noor, FSRN, New York.