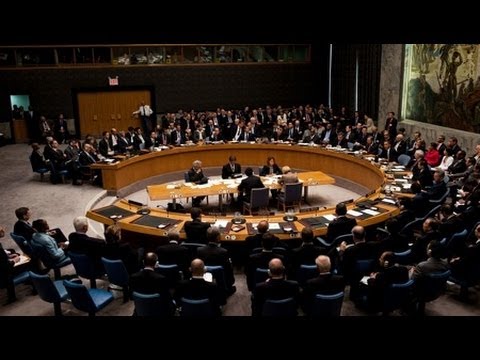 This week was a big week for the United States and the UN. And here to discuss all this is Vijay Prashad. Vijay Prashad is a professor of international studies at Trinity College in Hartford, Connecticut. His latest books include Uncle Swami: South Asians in America and Arab Spring, Libyan Winter. And he writes regularly for Frontline magazine and CounterPunch. Thank you for joining us, Vijay.

DESVARIEUX: So, Vijay, tell us a little bit about the Security Council meeting that happened on November 14.

PRASHAD: Well, NovemberÂ 14, in the evening, the Moroccans and the Egyptians called for an emergency Security Council meeting to discuss the Israeli attack on Gaza. I mean, you know, the question of Gaza has been a simmering one. There’ve been a series of UN discussions not only on Gaza but on Israel’s settlement policy in the West Bank. Very recently, on NovemberÂ 6, there was an important meeting where the UN cautioned Israel for what it called a flagrant violation of the agriculture in the West Bank. You know, Israel had begun this policy and really, you know, started again this policy of uprooting olive trees, and this was at a time of the olive harvest. So the UN has been consistently trying to raise questions about Israeli action in the occupied territories and Gaza.

In that context, the Egyptians, Moroccans, and others called for an emergency session. At the emergency session, the various countries, the 15 members of the council at this time, all said that something must be done. The president of the council at this point is the UN permanent representative from India, Hardeep Singh Puri, and after the meeting, he said there was unanimity in the council, that something had to be done, that the situation was atrocious.

The problem was that there was no, as it were, agreement on what should go forward, and therefore the council was paralyzed. In other words, most of the 15 members of the council at this time said that Israel should be condemned for the use of disproportionate force, not only, you know, the extrajudicial assassination of Hamas members and suchlike, but also the bombing of, say, water towers. You know, what does a water tower outside Khan Yunis have to do with the firing of rockets from Gaza into Israel? Why was a water tower targeted? So these were the kind of questions they raise.

But the United States blocked any attempt at crafting a resolution. And Ambassador Susan Rice made it very clear that the real culprit here was not the Israeli government, but Hamas. And this was a curious thing, because she spoke of the conflict as if it was a conflict between two governments, two sovereign governments, and therefore the United Nations has to come in and condemn both governments. You know, she wanted a kind of proportionality in condemnation, even though the war is a fundamentally disproportionate war. And that’s what the Egyptians had raised.

Any time there has been an attempt to censure Israel, whether it was for the invasion of Lebanon in 2006, Operation Cast Lead against Gaza in 2009, or on NovemberÂ 14 against the so-called Operation Pillar of Defense or Pillar of Cloud, however you translate the Hebrew, at each of these moments, it’s been the United States that’s blocked any attempt to have a serious discussion about Israeli occupation of Palestinian lands and of the kind of violence utilized, you know, the F-16s, Apache helicopters, you know, highly disproportionate violence, because when they talk about Palestinian rockets, what they’re talking about is cylindrical tubes fired by fertilizer, where the actual bomb material is a combination of TNT and urea, which is, again, fertilizer. This doesn’t compare at all to the use of F-16 bombers, you know, offshore naval crafts that bomb Gaza, and the use of Apache helicopters.

The essence of the UN Security Council meeting was that it was paralysis. One has to remember that it was Ambassador Susan Rice who was highly moralistic when the Russians and the Chinese blocked a resolution in February of this year against the Syrian government, and she said that any blood that is spilled henceforth in Syria will be on the hands of the Chinese and Russians. If we follow Susan Rice’s own standard, one should then say that any blood spilled in Gaza after NovemberÂ 4 is on the hands of the United States government. And I think that is a very harsh indictment, using her own standard against herself.

DESVARIEUX: Vijay, what do you make of the media’s portrayal of this Hamas leader? They’re calling him a military commander, Ahmed al-Jaabari. What are you hearing from other sources outside of the United States?

PRASHAD: There is no question that Jaabari was the head of the military wing of Hamas. That is without question. What was very interesting was on NovemberÂ 15 there was a frontpage story in Haaretz newspaper, a liberal newspaper published in Israel, which suggested that just a few hours before Mr.Â Jaabari was assassinated, he had received the most recent draft of a negotiating document, you know, which suggests that Hamas and the Israeli government or sections in the Israeli government had been conducting back-channel negotiations about a peace agreement.

You know, this is the first I had ever heard of such a back-channel negotiation, and indeed it’s quite a stunning, you know, development. If indeed Mr.Â Jaabari was in the middle of conducting some kind of backdoor peace agreement and yet he was targeted by the Israeli state, what does this tell us about the seriousness at this time of the Israeli government to make a peace agreement with Hamas? It’s also, I think, important to remember that in 2006, when Hamas won the election in the Gaza section of the Palestinian territories, when they won the election, the leader of Hamas wrote a letter to GeorgeÂ W.Â Bush saying that he would be ready to have a truce with Israel if Israel released itself, returned to the 1967 borders.

And also there was some other questions that he raised in that letter. That letter, which was simply the opening of a negotiation, went unanswered. The Bush administration essentially threw it in the bin and said Hamas is a terrorist organization. So these developments, that unanswered letter from 2006, if indeed it was the case that Jaabari was involved in some kind of negotiation, you know, the assassination of Jaabari, these put in serious doubt the question of, you know, whether the United States, as a so-called honest broker, or Israel are actually very much engaged with a kind of peace agenda. Or does this reveal to us that they are not actually interested in a peace agreement with the Palestinian people, but would like to continue this kind of occupation where they change the facts on the ground, suffocate Gaza, and in the end somehow miraculously make the problem of the Palestinians disappear?

DESVARIEUX: We’ll certainly be tracking this story here on The Real News. Thank you, Vijay, for joining us.