Any Attack on Syria Would Be Illegal, Increase Sectarianism in Middle East

Vijay Prashad: Possible missile strike against Syria has been a part of the West's game plan since 1979 to weaken Iran for its independent path, but US military intervention will increase sectarianism in the region and disrupt fragile peace in Lebanon

Vijay Prashad: Possible missile strike against Syria has been a part of the West's game plan since 1979 to weaken Iran for its independent path, but US military intervention will increase sectarianism in the region and disrupt fragile peace in Lebanon 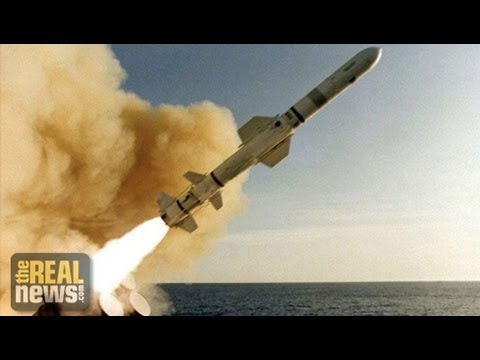 U.S. authorities say that they are ready and in position for an imminent strike against Syria. This is in response to the alleged use of chemical weapons by the regime of Bashar al-Assad. The Obama administration has not indicated whether or not it will seek congressional approval prior to launching a strike. The saber-rattling is getting to a fever pitch in Washington.

And now joining us to discuss all this is Vijay Prashad, who is in Beirut. Vijay is the Edward Said Chair at the American University at Beirut. He’s the author of many books, including The Poorer Nations: A Possible History of the Global South. And he writes regularly for The Hindu, Frontline magazine, and CounterPunch.

DESVARIEUX: So, Vijay, let’s just start off and discuss the legality of an imminent strike against Syria by the United States. Is it legal for the United States, based on international law, to attack Syria?

Secondly, what international law? I mean, generally it’s–you know, where a country is obliged to attack another country, it has to go to the United Nations if it’s not going to be a pariah state. And in the United Nations Charter, Chapter VII authorizes the Security Council to allow member states to attack other member states. You know, it’s a serious issue when one member state decides to attack another. The Security Council has to very judiciously assess the situation and then allow member states to use so-called Chapter VII rights, which is the use of military force.

Now, if the UN Security Council gives the right under Chapter VII, then there is some international law mandate to attack another sovereign country. You know, Syria is still, despite its many problems, a standing member of the United Nations. So until there is a UN resolution under Chapter VII which authorizes military force, any attack on Syria will be therefore illegal. And the United States in the Security Council has not been able to get a resolution. In fact, on Thursday in New York, the five permanent members had a series of meetings, which have all ended, you know, without agreement, because the Russians, who called the meeting, had been unable to walk the Americans and the British in particular down from the ledge of a Chapter VII resolution against Syria.

DESVARIEUX: Okay. And, Vijay, what is the strategic importance of Syria? Why is Syria such a player in all of this?

PRASHAD: Well, you know, Syria has been, as with a number of the other countries in the Arab world, a part of this momentum that we called the Arab Spring. Now, you know, many countries, the Arab Spring has had back it’s back–you know, it’s kind of turned backwards, as in Egypt. I mean, many countries, the Arab Spring has not been able to go forward, such as Bahrain. In that sense, there is no special thing about Syria, except that there’s been an enormous loss of life in Syria. Hundred thousand people have been killed. Over 2 million people have become displaced outside the country, you know, a very large number of people displaced inside the country. So the sheer enormity of the suffering in Syria has turned the world’s attention to Syria.

But that’s not really the issue that is driving the Western powers in, you know, the Syrian theater, nor is it the issue that’s driving the Russians or the Gulf Arab states or even Iran. You know, it’s not the huge humanitarian suffering that’s truly, you know, moving them. If that was indeed the case, then–for instance, let me give you a statistic. There has been a pledge of almost, I think, $12 million of food aid to refugees by all these countries. You know, particularly the United States and Western Europe have pledged large amounts of money for food aid. But just about a little more than a percent of their pledges have come in to the UN agencies, which means that it’s not the humanitarian issue that’s actually driving their agenda.

This is, I think, an important point to make, because they use the language of humanitarianism consistently; on the other hand, where humanitarianism, I think, is a serious issue, the crisis of millions of people, there have been empty pledges, unfulfilled pledges.

So if it’s not the humanitarian issue, what’s moving the West in Syria? Well, you know, there is a very obvious game plan here, which is that the West has for a very long time, in fact since 1979, sought to weaken the attempt by Iran to create a kind of independent path in the Middle East. Now, whatever one thinks of Iran’s own politics, whatever one thinks of the limitations of the Iranian model, etc., it is certainly the case that the Iranians have, you know, the right, nominally, to do their own to kind of political arrangements, etc. And, in fact, even if one disagrees with the Iranians, one has to disagree alongside the Iranians, not against them.

The West has taken an the antagonistic position since 1979. You know, that is the reason Saddam Hussein was sent, essentially, to fight an eight-year, very bloody war against Iran. So if you understand the Syrian conflict from the West’s perspective, they see this as an enormously productive opportunity to weaken Iran.

And I think that’s [incompr.] and it’s a very silly, very myopic approach, because what this so-called anti-Iranian policy in Syria is going to lead to is an increased sectarianism of the Middle East, you know, making the conflicts in the Middle East about Shia-Sunni. It allows the West therefore to back the Gulf Arab states’ extremely sectarian, you know, approach to the region, where they want to push an anti-Shia agenda.

So in that sense, the West, by being obsessed by an anti-Iranian politics, has begun to play alongside the Gulf Arab states in an anti-Shia politics, which impacts not only Syria, but of course Lebanon, from where I’m speaking, where the sectarian situation has already had a, you know, very bloody civil war. And the last thing people in Lebanon want to see is the reopening of those wounds. So the West, you know, in its game of weakening Iran, is opening a tinderbox which it just will not be able to control.

DESVARIEUX: You’re actually in Lebanon, as you mention, Vijay. And Hezbollah, who is a close ally to Iran, can you talk specifically about what their connection is to this whole Syrian conflict? Where do they fit in into this battle?

PRASHAD: I think it’s important to say in a sense that Hezbollah is not an ally of Iran or of Syria. Hezbollah is a movement that came out of, you know, sections of the Lebanese people to fight against the occupation of the Israelis in 1982. So Hezbollah’s principal and only, you know, reason for existence is, as the Lebanese call it, the resistance. In other words, they’re principally to fight for the right of Lebanon to exist as a sovereign state and against Israel.

You know, Hezbollah shares very little ideologically, you know, politically with the Syrian Baath party, or indeed with the [[email protected]”[email protected]’ki] regime in Iran. It has very much its own view of the world.

But this is for Hezbollah a pragmatic alliance. Because Hezbollah is not, you know, more than simply practically linked to the Syrian regime in Iran–it is not programmatically linked to Syria. You know, it has no programmatic ties with Iran. It is simply a practical relationship. Because of that, rather than understand Hezbollah’s role in this way, the West seeks to see Hezbollah as part of the pro-Iran axis and wishes to weaken Hezbollah.

The weakening of Hezbollah is a grave threat to the fragile peace in Lebanon. And I’m afraid this kind of cynical, simpleminded politics that the West is trying to put forward in this part of the world is going to open the doors of hell.

And I think that is very [snip] cavalier in its conversation about this chemical weapon attack. Of course this chemical weapon attack, whoever did it, whether it is a chemical attack or not, whoever did it, it’s outrageous, and that needs to be investigated. There are UN steps that should be taken. But casual language about, you know, we’re going to do this, we’re going to bomb here, without understanding the very fragile peace in the neighborhood of Syria, I think that is something that, you know, needs to be pointed out. The West has to recognize that when very large amounts of cruise missiles are fired into this region, the effects are catastrophic for a generation at least.

DESVARIEUX: Okay. Thank you so much for joining us, Vijay.