Gaddafi and 66 Others Murdered After Capture – Human Rights Watch

Vijay Prashad: Report says that Misrata-based militias butchered Gaddafi then captured and disarmed members of the Gaddafi convoy and executed at least 66 at the nearby Mahari Hotel

Vijay Prashad: Report says that Misrata-based militias butchered Gaddafi then captured and disarmed members of the Gaddafi convoy and executed at least 66 at the nearby Mahari Hotel 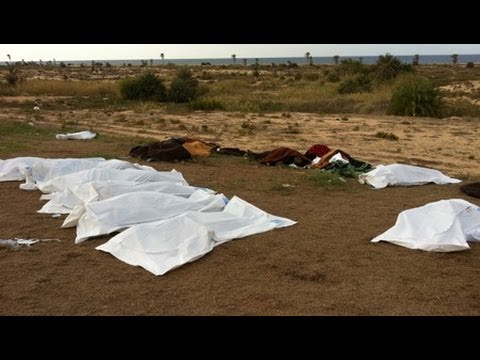 On October 17, Human Rights Watch released a report investigating the killing of Muammar Gaddafi. Here to discuss all this is Vijay Prashad. Vijay Prashad is a professor of international studies at Trinity College. His many publications include Arab Spring, Libyan Winter and, most recently, Uncle Swami: South Asians in America Today. Vijay also writes regularly for Frontline magazine and Counterpunch. Thank you for joining us.

DEVARIEUX: So, Vijay, tell us more about this Human Rights Watch report.

PRASHAD: Right. So Human Rights Watch has been producing a series of reports going back and evaluating the war in Libya. The most recent report came out three days before the one-year anniversary of the death of Muammar Gaddafi. It’s called Death of a Dictator. And it’s a very thorough report.

It demonstrates, basically, that the various militias, particularly the militias from the town of Misrata, captured Mr.Â Gaddafi after a NATO air strike disabled his convoy. He and about 200 people were trying to flee from the town of Sirte when they felt they were going to be overrun by the rebels, so a NATO air strike disabled the convoy. Mr.Â Gaddafi and at least 66 or 70 people were captured alive.

This is a very important thing that Human Rights Watch has identified, and I think quite authoritatively shown, that these people were captured alive. Then it turns out, as far as Human Rights Watch’s investigation is concerned, that Mr.Â Gaddafi, his son who was in charge of the defense of Sirte, various other regime leaders, and 66 other people were killed in custody. The 66 were killed in a hotel. Many of them had plastic hand-ties, which demonstrates that they had been, you know, captured and then shot in the head.

This is a serious, of course, violation of all custom and legal frameworks of how warfare should be conducted. You know, once you’ve captured somebody on the battlefield, once they have surrendered, it is generally treated as both legally inappropriate but also customarily the wrong thing to do, to kill your prisoners.

So this is a very serious report, and Human Rights Watch asked the Libyan government to act upon its findings.

The problem is that in May of this year, the Libyan government passed LawÂ 38, which gave, basically, blanket amnesty to the rebels for their actions during the war, which means the Libyan government has no appetite to conduct further investigation and to start criminal proceedings against the people who, you know, are basicallyâ€”have been, you know, alleged to have committed a war crime.

Now, why this is important is that the Libyan government, by not pursuing questions of justice for all people in Libya, have, I think, contributed to an atmosphere of general lawlessness. This was identified by the U.S. State Department in a cable from August of this year, before the big attack on the Benghazi consulate, where the U.S. embassy staff wrote in their cable to Washington that there are a series of lawless actions; many of them have been targeting Western targets. They say there is no conspiracy, but these are certainly organized actions. You know.

So when the attack came on the U.S. consulate in Benghazi, the United States has made clear they want to find out who has done it. The problem is, because there’s been such a casual attitude against, you know, creating institutions of justice, the fact that there has been no attempt to investigate war crimes over the last year or so has meant that there have been no real standards set for the various militias, the various armed groups, and they don’t seem prepared at all to submit to any kind of questioning or investigation. In fact, the leader of Ansar al-Sharia was in a hotel in Benghazi talking to various journalists, including The New York Times, and he quite cavalierly said, look, I wasn’t involved, this was just an accidental thing, etc.â€”total lack of seriousness about actions such as the killing of, you know, on the one side, Mr.Â Gaddafi, the other side, the ambassador Chris Stevens.

You know, as we talk right now, the Misratan rebels have surrounded the town of Bani Walid and are conducting an offensive against this town, threatening the civilians in this town. But this is not an action of an out-of-control militia, because they are following, you know, essentially, the Libyan government’s position. The Libyan government passed a resolution, ResolutionÂ 7, which authorized the militias to go in and subdue or pacify this town of 100,000 people, the town of Bani Walid.

There are very serious questions that remain open of justice, procedure, human rights violations. And, of course, this is a long-standing issue which, you know, is belittling or maybe highlighting the irony that a war that began on the grounds of protecting civilians, a war that began on the grounds of human rights, has now come to the point where human rights violations are being allowed by the United States government, which refused to let the Russians put forward a proposal in the UN Security Council cautioning about this action in Bani Walid. You know, the Libyan war was supposed to be a major human rights intervention. It has turned out to be a human rights disaster.