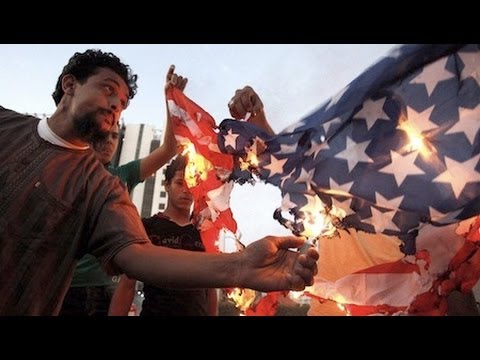 On Monday, tens of thousands of people protested in Beirut against the film that had sparked similar protests across the Middle East and in the Philippines.

Now joining us to discuss these protests and the killing of the American ambassador in Libya is Vijay Prashad. Vijay is a professor of international studies at Trinity College. He’s the author of the book The Darker Nations: A People’s History of the Third World and, more recently, the book Arab Spring, Libyan Winter. Thanks very much for joining us, Vijay.

JAY: So, first of all, let’s just summarize what’s been happening in the last couple of weeks, where the big protests have taken place, of course what happened in Libya, and then we’ll kind of dig into what you think is the meaning of all this.

PRASHAD: Well, this film was made last year, and a 13-minute trailer was uploaded onto the web, onto YouTube. In September the trailer was translated into Arabic. And then there is a little bit of doubt about what happened next.

There are two sets of TV channels that began to run stories about this video. One were the pro-Mubarak channels. And there’s a theory that it was an attempt, in a sense, to show the chaos after the fall of Mubarak and to demonstrate, you know, how dangerous things are in the hands of the Muslim Brotherhood.

The second theoryâ€”and, by the way, these theories are not necessarily contradictory. They’re both probably true. The second approach was that these Salafi channels, so-called Salafi satellite-ism, channels like Al-Nas, began to broadcast stories and short extracts from the film. And so they appealed in a sense to their Salafi base.

And in Egypt you had the first major demonstration at the embassy. The wall of the embassy was breached. There was violence. And then, within not more than a few hours, a major demonstration took place in Benghazi in front of the consulate, which was guarded by only four Libyan, you know, security guards. That consulate was overrun. At some point, RPG’s, or rocket propelled grenades, and other firearms were fired at the consulate and at a building behind it. The crowd I don’t think knew that the ambassador, Chris Stevens, was in residence. He had come that morning to meet the major oil company in Benghazi. And he was then very badly injured and died in the hospital.

The protests, riots spread across the world into Sudan. Of course, in Sri Lanka and Kashmir it was a very large demonstration, in Karachi, Pakistan, across the Arab world. Even inside Iran there was a big demonstration. And so this has taken on a kind of global relevance, even though the bulk of the people who are protesting would not have seen any part of the trailer, and certainly not the film. It seems that what they are doing is something other than simply protesting this film. And I think that has received less attention than it should have.

JAY: A lot of the people protesting are not unsophisticated about the West, in the sense many people know that it would not be normal in the United States to simply crack down on a film like that or make it illegal or something of the sort. Certainly people like Nasrallah from Hezbollah, the leader of Hezbollah, he’s a very sophisticated political person who knows very well what American law is like. In fact, he’s calling for some kind of a new law in order to deal with these sorts of cultural products that are insulting of all religions, although, of course, he’s sparked by the issue of insults to Muhammad and Islam. Yet he calls for the protest anyway. So is this really just more about pent-up anger about U.S. foreign policy?

PRASHAD: Well, certainly. I mean, let’s just go back a few years. There was the very important demonstrations, you know, that took place around the world after the pope made a loose statement in 2006 about how Muhammad’s contribution was not really much compared to that of Jesus Christ. He made this at a university in Germany. And he was roundly criticized. There were protests. His comments came just months after the controversy over the Danish cartoons in 2005. And these, of course, follow the most emblematic of such global protests, the 1989 protests around Salmon Rushdie’s book The Satanic Verses. But the protests in 2005, in 2006, and now have a similar quality: none of these cultural artifactsâ€”you know, the cartoons or this filmâ€”have been in the public domain at all. Most people had not heard of the pope’s speech or what he had said, or understood, really, this arcane reference, you know, the 14th-century quote that he had put forward.

But what is actually to be taken in hand is these protests signal a sense of frustration, you know, in a world which says: why do you continue to walk on our throats? You know, why do you feel that it’s acceptable to culturally mock us? And at one level you can say, you know, why don’t they come out and directly protest against, say, IMF policies, or why don’t they protest against, say, you know, the bases in the Middle East, or maybe the drone attacks. Of course there are some protests around these things, but they’re not very large.

The issue is that over the course of the last 45 years, you know, there’s been a real, almost concerted destruction of space in many of these societies to have public, you know, protest around economic issues or around direct issues that relate to politics. Well, what was allowed, what was given space in many of these places which used to be dictatorships, were protests around insults to religion. And that grammar continues.

JAY: Right. Vijay, how much do you think this has to do with an internal struggle? What I mean by this is that there’s always opposition to U.S. foreign policy, there’s always anger about U.S. foreign policy. But by taking hold of this issue of an insult to Islam, is it the forces that you could say are more in contradiction with the U.S., and particularly Islamic forces that are in contradiction with the Saudi leadership, with the Muslim brotherhood in Egypt, who are seen as, you know, collaborators having made deals with the U.S., and particularly now Morsi in Egypt, who’s going to get this big economic bailout package from the Americans and is helping now comanage the situation. The Muslim brotherhood in Syria is getting along with the Saudis and the Turks in terms of getting rid of Assad. And is this really more about this internal struggle within the political Islam?

PRASHAD: Well, quite likely there is some of that. I mean, there is obviously, you know, what motivates Hassan Nasrallah in Lebanon to call for demonstrations and suchlike. I mean, he is also in a bind, on the one side, unable to, you know, be more, perhaps, clear about his position vis-Ã -vis the Syrians, but in the case of thisâ€”you know, this sort of pathetically made film, he comes out with a great deal of clarity and is abled to, as it were, appeal to the hearts of his supporters. So certainly this is an opportunistic thing.

You know, there are maybe scores to be settled. There is jockeying going on. After all, in Egypt the constitution or the Constituent Assembly has to be put forward, and there is jockeying around that. Certainly in Libya there was a major political battle underway, where sections of the, you know, more Western-leaning diaspora, which have been able to take political power in Libya, are being threatened by the militias, by various kinds of Islamists, by people who fought on the ground in the war and are feeling politically left out. So there are, you know, local political battles, no doubt about that.