The Hypocrisy of US Defense of Israel’s Gaza War

Vijay Prashad: Obama says any country would defend itself against rockets as his drones drop bombs in many countries

Vijay Prashad: Obama says any country would defend itself against rockets as his drones drop bombs in many countries 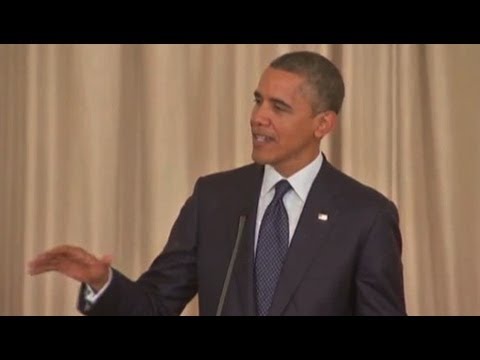 Recently, President Obama, in support of the Israeli attack on Gaza, said, of course Israel has a right to defend itselfâ€”what country wouldn’t with bombs or rockets raining down on it?

BARACK OBAMA, U.S. PRESIDENT: There’s no country on Earth that would tolerate missiles raining down on its citizens from outside its borders. So we are fully supportive of Israel’s right to defend itself from missiles landing on people’s homes.

JAY: Well, our next guest, I guess, finds this rather ironic. Joining us again is Vijay Prashad. He’s a professor of international studies at Trinity College in Hartford, Connecticut. His recent books include Arab Spring, Libyan Winter. Thanks again for joining us, Vijay.

VIJAY PRASHAD, PROF. INTERNATIONAL STUDIES, TRINITY COLLEGE: Thanks for having me.

JAY: So you wrote a piece about this statement of President Obama and the sort ofâ€”I don’t know if irony‘s a little too soft a word for the factâ€”how many bombs President Obama seems to be raining down on various peoples.

PRASHAD: You can imagine how much people laugh, you know, in the planet, the part of the planet that I call Drone Land, which includes Somalia, Yemen, Afghanistan, Pakistan, and, you know, then the inflation, including now in Gaza, where drones are being used to let loose bombs. People must have heard that statement where President Obama said no country can tolerate having, you know, missiles rained down on its citizens without fighting back. Well, by that standard, the Palestinian resistance is also not tolerating having missiles fired down on it.

Of course, the sad thing about this, the very, I think, tragic part, where it’s not funny, is that having made this kind of statement, the United States, you know, has been blocking every attempt in the United Nations to have a serious consideration not only of the use of drones, but of, you know, the invasion of different countries or of occupied territories by its client states. Just as Israel began its recent incursions on the occupied territory of Gaza by aerial bombardment and threatening a ground invasion, just as that was happening, the U.S.-backed client state of Rwanda pushed its rebel force, the M23 Movement, into the Democratic Republic of the Congo, where they were at the border of the major town in North Kivu district, and then have now taken that town. The town is Goma. So in both Goma and Gaza, the United States client statesâ€”in one case Rwanda, the other case Israelâ€”were acting against every single possible, you know, barrier placed by international law and by the United Nations.

But in both the cases, when the issue was raised at the United Nations Security Councilâ€”in the case of the stateless Palestinians, the case was brought forward by the Moroccans. In the case of the Democratic Republic of the Congo, the DRC raised the issue, and then the French, as one of the permanent members, put forward a resolution. In both cases, the United States didn’t allow the UN Security Council to censure its client states.

What we’re beginning to see unfold is a special kind of Obama doctrine, if you will, where there is the use of drones and other kinds of aerial bombardment against those who in a sense are said to deserve to be punished. You know, the language coming out of Israel is quite astounding, where there’s talk of how Gaza should be removed to the Middle Ages, where there’s talk of punishing Gaza for voting for Hamas. Similar language is used in Goma, where the president of Rwanda, Mr. Paul Kagame, a great favorite of the U.S. State Department, has been saying things like the Congolese people are good for nothing, they’re useless, they’re not even people. These are statements both from Israel and Rwanda that speak to the language of genocide. And the United States has blocked a firm resolution in the Security Council to censure Rwanda and Israel.

At the same time, there’s been a mountain of pressure on the UN Human Rights Council, particularly the head of that council, Navi Pillay, not to make strong statements about what’s happening in Gaza and in Goma. Navi Pillay, at the time of a previous invasion of the Rwandan and Ugandan armies with their proxy elements inside the Democratic Republic of Congo, Navi Pillay had commissioned a major study by the United Nations, which was published in 2010, which basically demonstrated that these two client states of the United Statesâ€”Uganda and Rwandaâ€”had broken international law and had perhaps committed crimes against humanity and war crimes against the Democratic Republic of Congo. But thatâ€”basically, that report which came out in 2010 was blocked by the United States.

At the same time, Navi Pillay had created the commission which was to study the last major Israeli pummelling of Gaza, and that was Cast Lead in 2009. A consequence of Cast Lead through Navi Pillay’s leadership was the production of the Goldstone Report. Again, the Goldstone Report was heavilyâ€”there was a lot of pressure on the Human Rights Council to disavow itself from the finding of Goldstone. In this case, when simultaneously there’s now a massive bombardment of Gaza by Israel and an invasion of Goma by the Rwandan-backed rebels, in these cases, Navi Pillay, having succumbed to pressure previously, has been relatively silent. And it demonstrates for us the kind of, I think, very strategic hypocrisy of the United States, a very bold approach to shut down the UN when client states of the United States are acting in a way in contravention with international law, but not, for instance, when it is enemies of the United States that are acting against international law.

JAY: And in President Obama’s case, there’s a kind of particular or specific hypocrisy when it comes to Rwanda and the Congo, ’cause when he was senator, didn’t he actually endorse a bill that would actually call for censuring Rwanda for exactly this kind of thing, and seemed at that time to understand? Since he’s been president, he seems to have forgotten all about that.

PRASHAD: You will be interested to remember that, yes, President Obama was the cosponsor of a Senate bill that censured any of Congo’s neighbors, Congo’s neighbors being Rwanda and Uganda, which came in and interfered in the sovereign workings of the Democratic Republic of Congo. But there was another cosponsor to that bill, and that was President Obama’s current secretary of state, Hillary Clinton. Now, now in power, President Obama and Secretary of State Clinton, who had at one time as senators taken a completely different position, are now defending Uganda and Rwanda in their illegal occupation of Eastern Congo. It’s a very great disgrace on the U.S. government.

JAY: And just finally, the timing of Israel’s attack on Gaza, essentially the day after the elections, what does that suggest, after the U.S. elections?

PRASHAD: It’s not just the invasion of Gaza. It was also the invasion of Goma. I mean, it’s not a suprise that these two things have happened simultaneously. In a sense, it must be a little bit irritating to the Obama administration, on the one side, to see the military leadership and the intelligence leadership, you know, General Allen, General Petraeus, them get compromised by their own personal problems on the one side, and secondly, on the diplomatic front, to have blow up in the Obama administration’s face the sheer hypocrisy of U.S. foreign policy. Both of these kinds of things to happen right when the second term is starting don’t, in a sense, foretellâ€”they’re not a very good harbinger of what is to come.

JAY: But for anyone that thought President Obama’s second term would be sort of an era of new liberalism and he would actually take a stand, a more forthright stand in the Middle East in terms of the Palestinians and such, people should, I guess, forget about that if they ever had such illusions.

JAY: Thanks for joining us, Vijay.

JAY: And thanks for joining us on The Real News. Don’t forget we’re in our fundraising campaign at year-end 2012. If you donate a dollar, it gets matched. So there’s a Donate button over here. If you haven’t done that yet, please do it, ’cause if you don’t, we can’t do this.