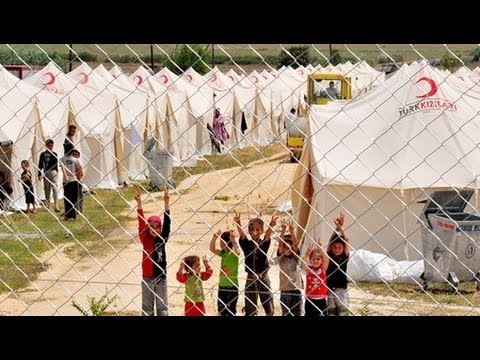 PAUL JAY, SENIOR EDITOR, TRNN: Welcome to The Real News Network. I’m Paul Jay in Baltimore. And welcome to our weekly report from Vijay Prashad. Vijay is a professor of international studies at Trinity College in Hartford, Connecticut. His latest books are Arab Spring, Libyan Winter and Uncle Swami: South Asians in America. Thanks for joining us again, Vijay.

JAY: What do you want to talk about this week?

PRASHAD: Well, we’re coming up to the next meeting of The Friends of Syria. They will meet in Marrakesh, Morocco, on 12Â December.

And very many confusing and conflictual things have been happening around the question of Syria. Firstly, I think we need to register that the suffering there has reached an intolerable point. You know, the numbers of dead are quite bewildering. Some people count 35,000. Some people count 40,000. I was talking to people at the UN High Commissioner for Refugees. They sent a mission from Damascus to Homs. They returned from Homs and said 60Â percent of the hospitals there are not functional. They found that many, many of the children in Homs have not been to school in over a year.

The UNHCR has now determined that 2.5Â million peopleâ€”this is as very conservative numberâ€”2.5Â million people have been directly affected by the conflict in Syriaâ€”and by “directly affected” they mean essentially that their lives have been put on hold. You know, they’re unable to do anything with their lives. They cannot work, they cannot have their children go to school. And so that’s a very large percentage. That’s about 10Â percent of the Syrian population is now living, essentially, in [{mb3:].

And the UNHCR has also said that they have registered 500,000 refugees. This is a serious matter. You know, they have now mentioned that the largest flow of refugees going south from Syria into Jordan have been coming under attack as they’ve been going into Jordan. So the UN has asked for some kind of safe passage for people fleeing the conflict.

JAY: Under attack by who?

PRASHAD: Ah, it’s very interesting. I asked them directly. You know, they use words like “There’s generalized violence.” That’s the phrase that the UN is using right now. And you ask them, from whom? You know, who is attacking them? And essentially, you know, not on record, but behind the scenes, they will say that the attack is coming from everybody.

You know, it’s very hard for the refugees to know fully who is attacking them. These are sometimes the rebels, sometimes government militias, and indeed sometimes government forces, because it has been embarrassing to see this vast flood of people leave the country. But there are now 500,000 registered refugees.

The UNHCR is worried. It’s a very underfunded, you know, organization. They are going to face winter. There have already been reports of three children have frozen to death in the camps. You know.

So you have to put this in the following kind of context. The United States has given the UNHCR’s Syria mission $9Â million this year to finance this massive humanitarian crisis. Meanwhile, the United States has just sent the USS Eisenhower into the Eastern Mediterranean. The USS Eisenhower, you know, costs about $180Â million to run. So the U.S. is spending money putting a sort of military pressure on Mr.Â Assad’s government, which thus far has not borne much fruit.

Meanwhile, nobody in the West, not one of the governments, has come forward and promised to put the complete bill for the UNHCR to help the 2.5Â million people who are living essentially in extremely dire straits. I think some focus needs to be put on that.

JAY: And what do you make of the American accusation, apparently, intelligence (I’m not sure where the intelligence comes from) that Assad’s government is planning to use chemical weapons on its own people, and this would be the redline for some kind of military intervention? You know, we’ve heard this kind of stuff before, like, around Iraq. That doesn’t mean that there isn’t some truth to it. What do you make of it?

PRASHAD: Well, I mean, there are obviously two ways to look at this. If you look at it from the point of view of the United States and the West in general, there has been a ramped-up sense of, you know, pressure on the Assad government.

On the one hand, there is NATO’s promise to bring in the Patriot batteries on the Turkish-Syrian border. You know, NATO had taken a sort of hands-off position on Syria until this point. This is the, you know, first step for NATO into this conflict.

Secondly, the entry of the USS Eisenhower, which is a major battleship, major aircraft carrier, into the eastern Mediterranean signals that the United States has received, you know, at least a wink of cooperation from the Russian government, because now they’ve allowed this major battle group to enter the vicinity of Russia’s principal warm-water port, and that is at Tartus, on the Syrian coastline.

So there is this big military pressure coming on the Assad government. And this language now of weapons of mass destruction, sarin gas, etc., once again furthers the pressure.

On the other side, it’s true that the Assad governmentâ€”its own sense of itself is it’s beleaguered, there is no flexibility, no maneuverability. It’s either going to survive or it is going to fall. And I think it’s because it’s put into that precarious position that there is fear that it might utilize all necessary means to survive. You know. And that is, I think, the reason why the Russians have been signaling a departure from Damascus.

You know, Mr.Â Putin was in Paris, where he said that the alliance with Damascus was not between the current Russian government and Mr.Â Assad but between the Soviet-era government and his father. You know, I think that was a very significant statement. Then Mr.Â Putin went to Turkey, where there’s a great interest in increasing Russian-Turkish aid. And Lavrov, the foreign minister of the Russian government, also suggested that somehow, you know, they’re going to put pressure on Turkey to restart some kind of regional solution.

So there isâ€”you know, at least for Mr.Â Assad, there is a loosening of his alliances globally, much more pressure on him. There is now military pressure.

JAY: Why do you think we don’t see something more akin to the Egyptian scenario, where the Syrian elite throws Assad under the bus and tries to essentially maintain the same regime but without Assad? Why does the Assad family’s control, which is so much the issue here, because certainly earlier in the conflictâ€”I don’t know if this is still the case, but earlier in the conflict, various of the rebel groups said they would negotiate, but not with Assad.

PRASHAD: Well, I mean, recently there was an interview done with a moderate dissident in Damascus who suggested that the tentacles of the Assad regime, you know, since the 1960s, has gone deep into the elite and they have canalized power quite forcefully around themselves.

You know, the new book out from Bassam Haddad demonstrates how in the last ten to twelve years, when new [incompr.] economic advantages were given out by the regime, it favored this elite. You know, this elite is a kind of kleptocracy. One could say similar things about the Egyptian elite, certainly. I mean, I think that here it might be that the sources of social power are not so nicely passed out as in Egypt, where there was a divide between the neoliberal kleptocracy and the military. And that serious breach opened up the possibility for just a, you know, change of regime, whereas in Syria, the sources of social power might be much more firmly entangled, you know, with the military, and this elite are not so separate from each other.

But, you know, again, it’s very hard to tell what the internal politics are in Syria at this point. There is a great demoralization in the bulk of the population. At the same time, there is a sense of utter beleagueredness in sections that support the Assad regime. And that dividing line, I think, has raised fears that there might be, you know, much more harsh action from the military before it goes down.

But, of course, this cannot be seen as a reason for an intense bombardment of Damascus or Homs or the countryside. I mean, what UNHCR, what the UN fears the most is that if there is increased military violence from outside, it will simply, you know, make the bloodletting exponentially rise. It will not calm things down.

JAY: You’re talking about any kind of foreign military intervention winds up having disastrous consequences.

JAY: Now, what do you make of the sort of debate that’s taking place on the internet, certain sections of the left who see almost this entire scenario as being foreign-manipulated, this is sort of a orchestration to bring down the Syrian regime because the Syrian government has played a certain amount of role in supporting Hezbollah, Hamas, opposing Israeli and American interests, and a sort of defense of Assad in some ways?

PRASHAD: Well, firstly, the enemy of my enemy is not my friend. You know, one has to be very careful about understanding the complexities of various countries. You know, the Ba’ath regime was an authoritarian regime. It had a very brutal side, suppressing any kind of internal dissent. It has had a history of creating a kleptocracy within. So the Ba’ath regime is not a progressive regime. It certainly did have some progressive manifestations in its support of Hezbollah, in, you know, allowing the radical Palestinian factions to have a head office in Damascus, but that doesn’t mean that one goes on the other side, you know, when a people rise up as they had for 11Â months and were relatively peaceful in their protests against the Assad government.

But what those people in those 11Â months demonstrated was they brought to the surface the fact that the Assad regime governed through authoritarian force and was not capable of any kind of political reform. You know, it knows either obedience or the fist. And given those two choices, there was a mass uprising that was peaceful. It was then put down by the fist and it morphed into an armed struggle.

Now, if you don’t see that history and only see the situation today, where it’s true that the Qataris and others are financing, you know, the more extremist sections of the rebellion, trying to color the rebellion in their image itself, on the other side you see the Americans trying to prop up the liberals to color the rebellion in their image. Just because these things are happening, that does not invalidate the fact that there is mass popular discontent with the lack of democracy inside Syria and with the lack of the ability of this regime to go outside the parameters, essentially, of the fist and obedience.

JAY: Okay. Thanks for joining us, Vijay.

JAY: And thanks for joining us on The Real News Network.

January 2, 2020
Sign Up for Our Newsletter
Help Us Make Real News!