All Eyes on France In Next Round of Iran Nuclear Talks

Vijay Prashad: International pressure should continue to mount on France after they thwarted efforts to reach consensus in the last meeting.

Vijay Prashad: International pressure should continue to mount on France after they thwarted efforts to reach consensus in the last meeting. 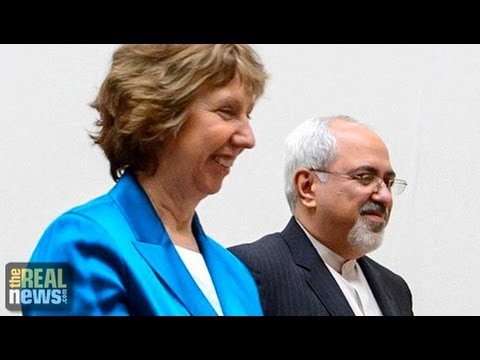 JESSICA DESVARIEUX, TRNN PRODUCER: Welcome to The Real News Network. I’m Jessica Desvarieux in Baltimore. And welcome to this edition of The Prashad Report.

Now joining us is Vijay Prashad. He’s the Edward Said Chair at American University in Beirut, and he’s a prolific author, with books including The Poorer Nations: A Possible History of the Global South. And he’s also a regular contributor to The Real News.

Thanks for being with us again, Vijay.

DESVARIEUX: So, Vijay, we know there are talks coming up between Iran and the P5+1 group happening in Geneva on November 20. Can you just give us an assessment of what you’ll be looking out for?

PRASHAD: Well, look, you know, earlier this month the P5, that is, the five permanent members of the UN Security Council, met with Iran. It was a remarkable thing that they had this meeting in the first place. You know, since 1979, there have been back-channel meetings between the Iranians and the Americans, but nothing, you know, as public as this. And it appeared at one point that some kind of deal was going to be cut when John Kerry decided to come to Geneva, because he made the decision to come from Oman, where he was dealing with the Palestinians and Israeli problem. Other foreign ministers also dissented on Geneva.

It looked like some sort of deal was in the offing. You know, the Iranians were very confident and things looked quite good. In fact, if a deal had been struck, it’s likely that the Iranians would have worked closely with the Americans to create some kind of drawdown in Syria. So a deal over the nuclear standoff in Geneva would have had a lot of positive after effects for this region.

But, of course, the deal didn’t come. And the reason the deal didn’t come is very important. It was largely the reason–I mean, what everybody recognizes is that the reason why the deal didn’t happen was the French scuttled it. And, you know, just on Monday, the Iranian president, Hassan Rouhani, spoke with the head of government in Russia, Mr. Putin, and theyin that conversation, Mr. Rouhani said that excessive demands–this was the phrase he used–excessive demands should not be made upon the Iranians. In other words, Mr. Rouhani was indicating that the French had at the meeting in Geneva made excessive demands. Essentially, they were not asking for a freeze on Iran’s nuclear program, but a rollback. In other words, they wanted a complete capitulation from Iran in order to continue to have a dialog.

This is a position that Iranians are simply not going to accept. They will not capitulate completely before the demands coming from France, which is largely speaking on behalf, it seems, of the Israelis, because from right after the Geneva meeting, Mr. Hollande came to Israel, where he reiterated these demands, to great applause from the Israeli elite. But this is not a position the Iranians are willing to take. So this is the reason why Mr. Rouhani said excessive demands will not be entertained.

What was on the table just a few–just last week, if that were repeated on Wednesday, this coming Wednesday, it would be acceptable to the Iranians, but for some discussion, you know, over particulars. So one hopes that somehow the West is going to get its act together.

It appears the Americans are eager to have a deal, because they understand that there’ll be a lot of advantages to the kind of imbroglio in Syria if Iran, you know, feels it doesn’t have an American boot on its neck, that’s a very good advantage for the Americans, who are paralyzed in this region, unable to act. And on the other hand, you know, the British have also said that they would like to see some deal, they would like to have a drawdown of the kind of policy that has been, you know, at least there for the last ten years.

So why the French are holding out, this is a very major question. It’s not fully answered. And I think the West needs to in fact have their own kind of discussion, come to Geneva with seriousness of intent to meet the Iranians, because the Iranians right now are willing to make a deal. If the West continues to make excessive demands, there’ll be no deal. And I think the blame for that should sit quite squarely in Paris and not in Tehran. You know, I think is a very important thing, because the mainstream media is going to continue to point his finger at Iran, when really all evidence suggests that the failure of this first Geneva meeting was an outcome of the French position. And hopefully they’ll have had enough pressure before they return to Geneva on Wednesday, you know, to have a much more reasonable approach to the Iranians on the nuclear question.