Indo-Russian Arms and Energy Deals Is Not What India Needs

The Modi government's desire to project India as a military power will intensify an existing arms race with Pakistan and continue to impoverish South Asia, says Vijay Prashad

The Modi government's desire to project India as a military power will intensify an existing arms race with Pakistan and continue to impoverish South Asia, says Vijay Prashad 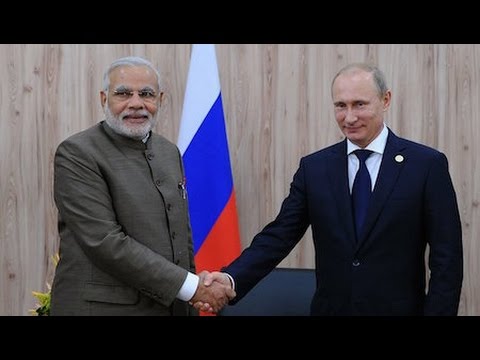 On the sidelines of the BRICS summit in Goa, India a few weeks ago, Russian President Vladimir Putin and Indian Prime Minister Narendra Modi, confirmed shared interested on international matters as well as large scale investments and signed various agreements. The deal signed included a commitment from Russia’s oil giant, Rosneft, pledging to invest 13 billion dollars in India’s ISA oil. Also an information security deal was signed to curb terrorism and drug trafficking. Billions of dollars worth of arms agreements including an intergovernmental agreement for 5 S400 triumphs which are air defense systems. As well as 4 stealth frigates which are warships and a joint venture to manufacture Kamov 226t helicopters in India.

On to talk about all of this with me is Vijay Prashad. Vijay Prashad is Professor of International Studies at Trinity College in Hartford, Connecticut. He is the author of over 18 books, including Arab Spring, Libyan Winter, The Poorer Nations: A Possible History of the Global South, and The Death of the Nation and the Future of the Arab Revolution. Vijay thank you so much for joining us.

PERIES: Alright Vijay, explain to us the significance of these energy and military deals signed by Russia and India and to what extent do you think this is a shift away from India’s dealings with the US particularly in terms of arms deals.

PRASHAD: So let’s put it this way first Sharmini that Indian government on issues of these kind of deals is quite mercenary. They’re looking for a good way to get their weaponry and to finance their energy sector. So, the Indian government has gone to all sides of the political equation if we look at the geopolitical equation to get arms. India is the biggest importer of arms from Israel and now India wants to do joint ventures with Russia to produce arms inside India.

So, in that sense I don’t think that we should exaggerate the politics of this although I’ll come to that in a minute. My main point is that India has sought someone to come in a do joint venture arms productions inside India. In fact Mr. Modi has made a big deal of this by pushing for two things. One is he is called ideologically for something called make in India, that means production in India.

Secondly he has open foreign direct investment for defense into India. These two things combined will lead almost directly into this deal with the Russians where some stealth fighters and ships and other things will be built inside India, presumably not just for the Indian market but for export to other countries in the world. This is a very big deal for the Indian arms production sector. India is the largest importer of arms in the world. So the expectation is if you’re going to be producing your own arms, you want leverage or foreign exchange for buying arms.

Of course the prior question is why does India need to be the world’s largest purchaser of arms? There is some obscenity there. They have scarce public resources. Is this really the best kind of industry that India needs. But nonetheless this is an avenue that Russia came in to support this agenda of the Modi government. Really it’s not just the Modi government, it’s the consensus of the various mainstream political parties in India that they should be arms manufacturing inside India.

So, that part of it I think is less surprising. Equally unsurprising is the enormous investment coming into India’s energy sector. India’s very energy import reliant. Relies on oil from the Gulf, relies on natural gas imports, etc. Because there’s this pressure on India to pivot from carbon to some other fuel, to some other kind of energy source, India has gone in a big way, into nuclear instead of solar.

That’s another political choice that this government and the previous government has made. They made a big push into nuclear. When they signed the nuclear deal with the United States, the United States hoped that [inaud.] would be the beneficiary. In other words, an American firm would be the beneficiary of India’s pivot to the nuclear option. Instead of course now it’s been clear that the Russians are going to come in very quickly and provide nuclear material, build their reactors, etc. So, that’s one part of this energy infusion.

The second is this enormous deal signed between the Russia oil company and the Indian government’s oil company for 12.9 billion dollars. It’s a very big deal for the purchase of refineries and for putting in investment for upgrading some of the refineries structures because India as I said is a major importer of oil. So, they put a lot of money on into the infrastructure of India. These are not necessarily choices that a progressive government would make. In other words, strengthening oil, entering nuclear. But this is the agenda that this government has picked.

PERIES: So Vijay of course these have advantages to Russia as well and what are they?

PRASHAD: Well for Russia there are several things. You know one is Russia and China have over the course of the last several years, built up this big infrastructural plan to pivot away from Europe. Some of this was motivated not by ideology but by the problem of the sanctions around Ukraine. The Russians were taking other avenues to sell natural gas so they pivoted to China. Another country heavily reliant on the import of energy.

So, there is this kind of new Asian discussion about energy and markets and about building up a kind of Asian pole Vis–à–vis the rest of the world. There is a more natural fit between Russia and China because they have a more similar orientation Vis–à–vis the west. India on the other hand has a favorable – this government and the previous government has a favorable understanding with the west, close relations with the United States, with the US military. So some of this, in that sense is mercenary. It’s about commerce. Not necessarily about politics or geopolitics.

On the other hand, very interestingly at the BRICS summit during the signing of these documents, Mr. Modi the Prime Minister said he is in agreement with the Russians in terms of what’s going on in the Middle East and in other parts of the world. This is a very curious development. The current Indian government, the right-wing government has a empathetical relationship with the Chinese, is very pro-American and yet this kind of [inaud.] of the deal has shown that Mr. Modi is also saying things that are probably not received very happily in Washington, which is to say that the Russian approach in the Middle East is the correct one and India agrees with that. I think [inaud.] Mr. Modi here is reflecting the foreign policy consensus in India.

This is not the view of his own party. His own party of course believes the only correct view in west Asia or in the Middle East is that there is enunciated by Israel. They are very close to the Israelis. But the consensus in India is not with that. The consensus remains very more kind of balanced approach in the Middle East is necessary. So Modi said, this is well – but again as I said we shouldn’t exaggerate that. It doesn’t mean that India is not tilting like the Philippines away from the United States towards Russia and China. What it means is Mr. Modi is saying this because that is the prevailing consensus in the Indian foreign policy establishment and also Mr. Modi has been pragmatic because they’re signing these major deals, energy deals and arms deals which are part of his agenda as much as they are part of the Russian agenda.

PERIES: And why does Modi want to be seen as this kind of aggressive leader of India?

PRASHAD: Yea Mr. Modi comes from a tradition of foreign policy that believes that every crisis must be taken in hand in a muscular way. There’s no question that they use the purchase of arms to signal their strength. To say that we are a stronger country. Why didn’t they for instance sit down with the Russians and talk about food security and talk about new agricultural mechanisms who are undergoing a big crisis. There was no conversation about that.

There was no conversation about the water crisis in India. Perhaps talk to the Russians who have very successful irrigation projects to bring in some kind of a know how to help the Indian countryside with irrigation, with harnessing rain water, things like that. None of that was on the table. What was interesting for them was this kind of muscular aggressive tone by projecting India as a major military power buying arms. Now this a dangerous thing because you see the Pakistanis have been buying weapons from China and from the United States and this, every time India has a big buy of weapons, the Pakistanis buy weapons.

This is the kind of arms race that continues to impoverish south Asian and in a sense, there is nothing progressive about making your own weapons. The questions that should be raised of these deals is why are these deals necessary in the first place. You know it is a pity that so much of the BRICS dynamic is about big business and is about energy and weaponry. You know an alternative needs to take place and therefore at the Goa BRICS meeting there was a kind of alternative BRICS discussion that took place when people were trying to raise some of these other issues. So, we should never allow governments to frame their international relations on the kind of commerce they do with each other. Other foreign forms of commerce are required and those are sadly off the table.

PERIES: So Vijay, here you’re talking about BRICS from below.

PRASHAD: BRICS from below, correct.

PERIES: Alright Vijay, I thank you so much for joining us today.