As the UN announces that the number of refugees and migrants in the Mediterranean this year exceeds 300,000, Vijay Prashad says the superpowers must move towards a ceasefire in Syria as soon as possible to stem the tide

As the UN announces that the number of refugees and migrants in the Mediterranean this year exceeds 300,000, Vijay Prashad says the superpowers must move towards a ceasefire in Syria as soon as possible to stem the tide 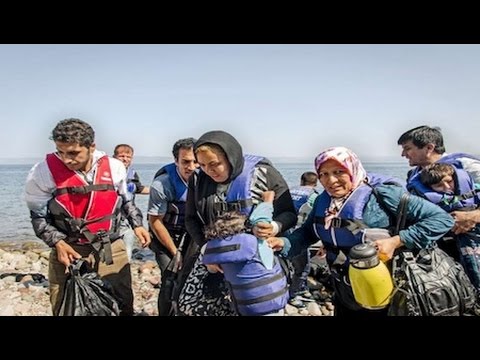 The International Organization for Migration says at least 2,400 people have died this year while attempting to cross the Mediterranean Sea to Europe. In Greece for example, more refugees arrived at its coast last month than the entire year in 2014. it is deemed the worst refugee crisis in the world since World War II. UN officials are saying the crisis has worsened in the past year. Let’s have a look.

SPEAKER: The number of refugees and migrants in the Mediterranean this year has now exceeded 300,000. that includes 200,000 people landing in Greece, and 110,000 in Italy. This represents a large increase from last year, when about 219,000 people crossed the Mediterranean during the whole of 2014.

PERIES: The two most recent tragedies that have received much attention in the media are off the coast of Libya estimated 200 people died when two boats capsized, and 71 refugees were found dead from suffocation inside a freezer truck in Austria, with officials saying that they were likely from Syria. The UN Security Council recently said that the situation in Syria has become the largest humanitarian emergency in the world, threatening peace and security in the region, as 4 million people are estimated to be seeking refugee status in other countries.

Now joining me to discuss all of this is Vijay Prashad. Vijay is a professor of international studies at Trinity College, and author of many books. His latest is Letters to Palestine. He joins us today from Northampton. Thank you so much for joining us, Vijay.

PERIES: Vijay, this humanitarian crisis that the UN is referring to has of course worsened. And it’s of course worth noting that a year ago the U.S. had initiated steps to take up a military campaign against the Islamic State. But from your point of view, what’s causing this exodus?

PRASHAD: Well first, Sharmini, I think it’s important to indicate that this is a refugee crisis that has finally hit European shores. And when it strikes Europe these kind of statements are made, that it’s the largest refugee crisis since World War II. If you look at the refugee crisis in the heart of Africa, in the Great Lakes region around the Congo, we’ve had several million people dead over the course of the past 20 years. Enormous refugees produced by war and economic collapse. If you look at Burma recently, the Rohingyas, the percentage of the Rohingyas that got on boats.

So in other words what I just want to make clear is that there has been a global refugee crisis caused by war and economic policy. It just so happens that this refugee crisis has not reached the shore of Europe directly, and therefore you haven’t had European officials be so horrified. Even the Syrian war’s refugee problem has been running since 2011. Of the 9-10 million Syrians that have been displaced from their homes, about 5-6 million of them are internally displaced inside war-ravaged Syria. About 3 to almost 4 million Syrians are living in Jordan, in Lebanon, in Turkey, somewhere in Egypt. And they have been, these countries have witnessed a catastrophic refugee crisis.

So it’s really almost always astounding to have European officials get suddenly upset about a refugee crisis when the refugees start coming on European shores. Prior to that they seem to have quite a cavalier attitude towards the suffering of people who are refugees of war and economic policy.

PERIES: So Vijay, the situation in Libya, where some of these refugees are coming from, the foreign minister there has called on the international community to respond by air strikes against the Islamic State. What do you make of that?

PRASHAD: The first thing is this was a country destroyed by a war essentially engendered by the North Atlantic Treaty Organization, knowing full well that once they came in and destroyed the state, chaos would reign. The West continues to believe that its so-called regime change operations will somehow turn out beautifully. History should have informed them already that this was going to be catastrophic.

So the state in Libya was destroyed. Now you have two governments. So when you say the foreign minister says, this is the foreign minister of the Western-backed government that sits in Dubruc. The other government in Tripoli, because there are two governments, doesn’t agree that there should be air strikes. But now there is in a sense a third government, which is the Islamic State, which has established itself in the hometown of Col. Muammar Gaddafi. That is, the town of Sirte. The problem for the government in Dubruc is it doesn’t have the material ability to take on either the Islamic State or the government in Tripoli, the capital of Libya. So that’s their problem. That’s what he’s talking about.

A very interesting development came from the European Union, where there was a suggestion if they got a UN authorization, to use armed force against the boats used by smugglers that were coming across the Mediterranean. This is a remarkable thought, almost Orwellian plot from the European Commission, that they would use armed force somehow to destroy dingies that were sitting near the Libyan coastline. The problem for the Europeans was even to bomb inside Libyan territorial waters they would need UN authorization. And there’s no way they’re going to get UN authorization.

So in a sense the kind of sabre rattling that came from the Europeans that once more raised the hopes of the one government sitting in Dubruc that Western air strikes would start again, that crazy plan from the Europeans of course went nowhere except, of course, to raise the hopes of the government in Dubruc. Which is not going to happen. I mean, the Europeans are not going to at this time bomb in Libya. The only powers that have bombed in Libya since the NATO bombing ended have been Egyptians and the United Arab Emirates. But even they’re not keen at this time to bomb the ISIS targets that are in Sirte.

PERIES: Vijay, in order to stop this exodus that’s going on, people taking such great risks and putting their lives into the Mediterranean, essentially, what is a solution? The Iranians have tabled a solution and you have written about the possibility of a regional solution in the past. What can be done?

PRASHAD: This is a very important issue. Six and a half to seven million, perhaps close to ten million now Syrians are internally displaced. So the numbers that are going through Hungary, Macedonia, these are very large numbers. But nowhere near the numbers of people who are facing extraordinary hardship and dying in large numbers inside Syria.

In order to stem the tide of at least the Syrian refugees, the refugees from war, I think it’s very important for the superpowers of the world to move towards some kind of ceasefire in at least as many parts of Syria as is possible. The Iranians are very keen to have a ceasefire that involves the regional powers, because after all, many of the groups fighting the Damascus government now would not be able to continue their work without support from Turkey, from the Saudis, from the Gulf Arab states and others as well, including the United States and Jordan.

So the Iranian plan essentially is to bring the proxies of the of these regional powers and the Assad government to some kind of agreement. This would allow at least in very large parts of Syria for some calm and a ceasefire. And might enable the regional powers to more properly isolate the Islamic State and some of the al-Qaeda groups which continue to make I think considerable gains, including today in Idlib province where they’re attacking the last major air base of the Assad government in northern Idlib. Meanwhile, if this was not enough chaos, the Israelis have been bombing [inaud.] inside Syria and creating a more difficult situation for the civilians who have been trying to cross into Lebanon.

The idea that the Iranians have I think is a humanitarian idea. Whatever their motives might be, whatever the considerations of geopolitics people might have, I think the plain humanitarian road here is to honor the Iranian proposal and to try to make whatever ceasefire is possible at this time so that the N-odd million displaced people inside Syria can live with some kind of stability. And that some of them who are trying to flee the country might decide that there’s a chance for them to build a future inside Syria.

PERIES: Vijay, we’ll be following this. And we’d like to deepen this analysis and the proposal you have on the table. So I hope you join us again very soon.

PERIES: And thank you for joining th Real News Network.

Russia Pivots to Eurasia for Trade and Military Alliances

Putin and Russian Nationalism on the Rise

Ukrainian Government Criminalizing Support For Rebellions in the East

Why Have So Many Ukrainians Fled to Russia?

How The World Bank & IMF Plan to “Dismantle” Ukrainian Economy

The Forces behind Argentina’s Default

Do US Satellite Images Show Russia Firing Rockets into Ukraine?