The Realignment of Turkish and Russian Relations

Vijay Prashad: Turkey suggests it's no longer willing to play the role of NATO's Islamists for the United States

Vijay Prashad: Turkey suggests it's no longer willing to play the role of NATO's Islamists for the United States 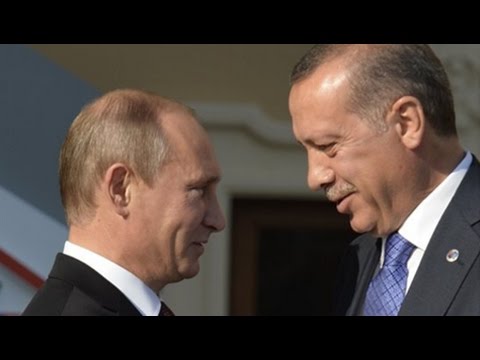 President Erdoğan of Turkey and President Putin of Russia, met this week in St. Petersburg and agreed to reopen economic relations to continue to join to work on the gas pipeline and on nuclear reaction. And to restart Russian tourism to Turkey. However, Russia did not appear to get a commitment from Turkey to stop supporting and supplying rebels who are trying to overthrow Syria’s President Bashar al-Assad.

Now joining us to discuss this and much more is Vijay Prashad. He’s a George and Martha Kellner Chair in South Asian History and Professor of International Studies at Trinity College. He is the author of twenty books including, The Death of the Nation and the Future of the Arab Revolution. And he’s the coeditor of Land of Blue Helmets: The UN in the Arab World. Thank you for joining us today Vijay.

PERIES: So Vijay let’s begin with the atmosphere between the two countries during this meeting and then what did they actually accomplish in St. Petersburg?

PRASHAD: Well the first thing to recognize is that Russian-Turkish relations by the spring of this year had been an absolute low point. You may remember that a Turkish pilot had shot down a Russian plane. That Russian-Turkish relations vis-à-vis Syria, had been greatly stressed as a consequence of the shooting down of that plane. Russian tourism which is quite a robust economic benefit for Turkey, had declined by about 90%.

So never has Russian-Turkish relations since the 1990’s been at such a low point. Then about a month ago in June and mid-June, Mr. Erdoğan made a very warm speech on Russia day where he talked about friendship and the importance of the relationship between Russia and Turkey. But some people are suggesting that the business lobby in Turkey which has got a very considerable part of Mr. Erdoğan’s ear.

The business lobby had been working to backchannel a reset of relations between Russia and Turkey. You know for all the gains that Turkey believed that it would get from Europe and from the United States, economic ties with Russia were much more robust than economic ties with the EU, the European Union. So this business community pressure on Erdoğan, had had considerable impact in months before the coup attempt which was in July 15.

So by June 12th, Erdoğan had already publicly signaled a reset of relations. And one heard from people in the Turkish government that the Turkish steam pipeline and the nuclear reactors were very much part of the agenda in this reset.

I just want to underline; this was before the failed coup attempt in July of 15. Since the coup attempt, the Turkish government has been even more aggressive in trying to reset this relationship with Russia. And they are actually perhaps two reasons for that.

The first is the government is Mr. Erdoğan is very disappointed, that’s how he puts it, with the reaction of the European countries to the coup attempt and the aftermath of the coup. When Mr. Erdoğan and his government of his arrested perhaps 60 thousand people inside Turkey. And they’re also not happy with the United States’ response because the US’s refusing was not committed to extradite Mr. Gulen who the Turks say is the mastermind of this coup attempt.

So frustration with the west from the one side has come with I think a renewed believe that I think there needs to be some kind of reparation with Russians. Not only for business reasons but also because the situation in Syria which has had important spillover effects into Turkey, needs some sort of settlement and here I think the Turks have finally come to the view that Russia needs to play an important role.

PERIES: But that does not mean that Erdoğan is shifting his position on Barsha al-Assad’s right to rule in the country.

PRASHAD: No, he is indeed not. In fact, he gave an important interview while he was in St. Petersburg to an important Russian television channel. When Mr. Erdoğan said a couple of interesting things. One is he said quite plainly that Turkey and Russia need to work together to bring peace in Syria.

But this is new language coming from Turkey. Where Turkey is saying it would like to work with Russia to bring forward some kind of agenda. And he intimated that the United States, the Gulf, Arabs, and others should come aboard this Russian-Turkish agenda for Syria.

I think this is a very significant development. He also said in this interview that Mr. Assad needs to go and somebody else needs to step in. But this is not actually the same as the statements coming from Mr. Erdoğan previously which was that before Mr. Assad goes, there can be no peace process.

So he seems to have softened a little bit. That there’s an acceptance with the idea that they have to sit with the Russians to produce some kind of peace agenda and then eventually Mr. Assad will perhaps go. So this I think is a softening of his previous position. But it’s not indeed the fact that his walk to the Russian side of the table.

PERIES: And what does this mean in terms of Turkish-US relations? Now I know that it was beginning to strain after the attempted coup had failed and the Americans didn’t come to his aid immediately and in fact, the extradition requests of Gulen is not being honored by the US. So what does this do to Turkish-US relations? This pivot towards Russia?

PRASHAD: Well firstly, Turkish-US relations are at a bad position. They are not as poor as Russian-Turkish relations were earlier this year, but they’re certainly in a bad way. I mean just to take some examples, the American base which is at Incirlik, in fact it’s not a US base, it’s a Turkish base which the United States has been using for the bombing in Syria.

This base which has a history into the core wall, was surrounded by protestors a few weeks ago who were demanding that the United States extradite Mr. Gulen. It was quite a ferocious protest where they were saying – making very very inflammatory statements about the United States. In fact, some people were worrying that this would be kind of another Benghazi. At which point, the Turks sent in a large troop deployment to surround the base and prevent any kind of action from taking place.

This is what took place the day before the US Joint Chief of Staff arrived in Turkey to try to repair relations between Turkey and the United States. Or rather, the Turkish military and the Pentagon. And it seems like there’s been some understanding reach between the two sides. But politically on the streets, Mr. Erdoğan has made a great deal of the fact that the United States is shielding Fethullah Gulen and refusing to extradite him.

In fact, there was a mass demonstration in Turkey. Perhaps a million people gathered to support Mr. Erdoğan when he spoke and he made quite strong statements about the need for Mr. Gulen to be extradited. So I would suggest that relations are not at a very bad position but there’s certainly a great deal of tension between Washington and Ankara. And it appears that this reset with Russia on the one side should not do greatly – worry the United States. Because after all the United States is also working on a peace proposal with the Russians regarding Syria.

So here it just seems that the Turks are just coming on board that process. But it should worry the United States a little bit because after all, Turkey seems to suggest that it’s no longer willing to play the role of NATO’s Islamists. [Inaud.] has a much more balanced understanding of its own position in the region.

PERIES: And as far as Russians are concerned now, there’s been as you said a reset in terms of economic activity including this pipeline and some nuclear activity. What is that all about?

PRASHAD: Well look, for a very long time the Russians and the Chinese have been enormous infrastructure that links Turkey to the rest of Asia. You know the Chinese have built railroads, trains, etc. In fact, the railroad that goes all the way to Lake Van which is the eastern point of Turkey, then crosses into Turkey, attaching in a sense Anatolia all the way to the coastline of China. So there’s been a very long process of creating this Asian infrastructure. And the Russians have been in a sense, part of this for a very long time.

So this Turkish stream pipeline is not only important for Turkey whose economy would be greatly helped by the construction of this pipeline. But it’s also very important for Russia which wants to find an alternative route to deliver its natural gas into Europe. So that’s what this really should be about.

PERIES: Alright Vijay, thank you so much for joining us today.