BRICS Challenges the “Double Standard” of the West

Newsclick talks to Vijay Prashad about the Declaration of the 7th Summit of the BRICS countries held in Ufa, Russia.

Newsclick talks to Vijay Prashad about the Declaration of the 7th Summit of the BRICS countries held in Ufa, Russia. 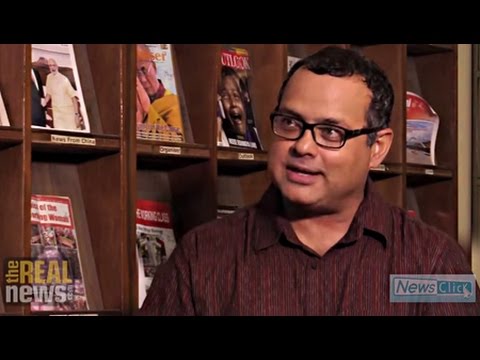 PRABIR PURKAYASTHA, NEWSCLICK: Hello and welcome to a joint program with Real News and Newsclick. We are discussing today the BRICS summit which just took place in Ufa in Russia. We have with us Professor Vijay Prashad, eminent writer, commentator.

Vijay, the BRICS summit. It has, I think, two central elements to it, which is the main part of the declaration. One is international affairs including terrorism, and so on. And the second is economics. What would you think are the key points the BRICS statement makes?

PROF. VIJAY PRASHAD, TRINITY COLLEGE: The most important theme that comes out in common is the importance of the UN architecture. The United States, particularly after the collapse of the Soviet Union and then certainly after the collapse or lessening power of the nonaligned movement, was able to ride roughshod through the United Nations, through the Bretonwood institutions, push this view that they called globalization.

The Iraq war for instance, of 1990-1991 and the bombing of Panama in 1989 were test cases for this. They just rode right through international institutions, were able to get Security Council resolutions on their behalf. If not directly for the war, but to justify it later with a sanctions regime against Iraq, for instance.

So what has happened, I think, with the emergence of the BRICS in the last few years is a pushback against what we might consider this short era of U.S. unipoliarity. So in that sense the BRICS declaration from Ufa as with the previous declarations have all called for the sanctity or the importance of the United Nations institutions and for international law.

PURKAYASTHA: I would take a little different view of that. In the initial phases, actually, U.S. was able to get the Untied Nations to do its bidding. It’s only later that you see the U.S. bypassing the United Nations in the second Iraq War in which they actually did not have the sanctions of the Security Council, and then a whole host of other things, including unilateral sanctions. So in that sense I would say there is two phases, of the complete hegemony in which the UN itself bends to the U.S., and the second phase in which the U.S. bypasses the UN and is doing a set of activities including war, including the drone strikes for instance, and also the unilateral sanctions. A lot of them are unilateral sanctions. The BRICS statement itself [inaud.]

PRASHAD: There are actually two phases, because the Untied States begins to have a hegemonic fray, or their dominance over the institutions begins to fray in the early 2000s. After all, this is when the BRICS begins, first as IBSA, India, Brazil, South Africa, in 2003, and eventually the other countries join in.

But in this statement, the two direct comments on the persistence of U.S. dominance, one of them is on Libya where the United States, the French, were able to push through under Chapter 7, which is use of violence through the security council, resolution 1973, to bomb Libya. And there’s a direct statement in the Ufa declaration which says it was that destruction of the Libyan state which has opened a door to Islamsim, the most dangerous forms of chaos and terrorism in North Africa.

And you know, this is important because the BRICS countries, particularly Russia and China, have said that they will never again allow the West to have a Chapter 7 resolution through the Security Council, in other words use of force, as long as they have no faith in Western intentions. The test case here, of course, was Syria. Where again, the Ufa declaration talks about the importance of a political settlement, and such.

PURKAYASTHA: I think the important part of what you’re saying is that this declaration up front questions essentially the U.S. attempting to bypass multilateral institutions, international law, and unilaterally declaring what it considers to be right. And that the statement is really strong on. And also unilateral sanctions, which is really Russia and Iran. These are the two countries under unilateral sanctions, and both are long-term issues.

And the third issue I think that also the statement does talk about is the, in the name of terrorism, what’s happening in, across a very large part of the globe. From West Asia, North Africa, the destruction of state. And the fact that without a participation of all the countries, this is not going to reverse.

Would you say that this, if this is the platform in which they can rally global opinion, this is a way forward and therefore the BRICS has played some role through these statements and what role they may play in the future?

Now, of course, the challenge is not exactly the character or temper that I would like. I would like to see, for instance, a discussion not of the threat of terrorism but to raise the question of the very economic policies that the West has pushed for the last 25 years and which the BRICS have not broken from. Those policies engender terrorism. They engender the social forces that create, say, Mexican drug gangs on the one side, ISIS on the other.

So the BRICS have opened the door against a singular narrative coming from the West. But their own explanation of things is not adequate to my taste. I’m glad that it’s oxygenated. I wish there was a little more oxygen in the room.

PURKAYASTHA: There is also for South Africa, which is sort of wishy-washy on lots of issues, India which is now changing its position on Israel and Palestine. But broadly the statement endorses the positions that India has taken in the past. And there is no going back on at least formally. [Inaud.] Israel, the settlements, and so on. You think that’s something, at least is a good thing for people at least in India who consider that we are having serious problems with the way Israel policies and Palestine policies are shaping up in Modi government’s times?

PRASHAD: Well, it’s the Modi government. But let’s remember that during the last couple of bombings by Israel of Gaza, from 2009 Cast Lead onward, the Indian government’s statements have been awfully, in the language of diplomacy, measured. And wishy-washy. And right through the Palestinian ambassador in Delhi has said, hey listen, this is ridiculous. You have to have a stronger statement.

During the 2009 bombing, and then in 2011-2012, 2012 was the main bombing, it was the BRICS statement that set a higher standard of criticism of Israel than India had taken. This is before the Modi government comes to power. The Modi government’s addition has been to go to the United Nations institutions, in this case the Human Rights Council, and abstain in what is largely an open and shut case to adopt a report that alleges war crimes by Israel, and sends the report along to the international criminal court.

China voted to send this report forward. China is not a signatory to the international criminal court like India is not, and yet it voted to send it along. India didn’t on so-called procedural grounds.

This BRICS statement doesn’t mention Gaza directly but talks strongly about Israeli politics and its settlement policy. Very strong language. India is a signatory to the Ufa statement. So in many ways India is yet caught between the elites’ desire, not just the [BJP], but the Indian elites’ desire to have a very close relationship with the United States, which means you have to adopt the U.S. and Israeli narrative on Israel-Palestine, and the BRICS bloc, which as yet continues to hold the kind of non-aligned movement or NAM approach to the Israel-Palestine issue. In a sense [inaud.] anchors India on this side, whereas the drift is towards that end.

So if there are a million problems with the BRICS bloc, et cetera, one of the important things to take seriously is its commitment to some of the older NAM political views. For instance, about the importance of decolonization. Because that’s how the Israel-Palestine issue is seen from the NAM situation. It’s not seen through the lens of security or terrorism. It’s seen through the lens of decolonization. And the Palestinians have not been decolonized. They remain a colonized people.

So that is a progressive aspect that the BRICS plays vis-a-vis countries like India.

PURKAYASTHA: We’ll come back to you with a second section of our discussions with Vijay on the economic part of the BRICS statement.