Vijay Prashad says that according to this report, even the killing of the boys playing ball on the beach by Israeli military last year before the international press was deemed a legitimate act of war

Vijay Prashad says that according to this report, even the killing of the boys playing ball on the beach by Israeli military last year before the international press was deemed a legitimate act of war 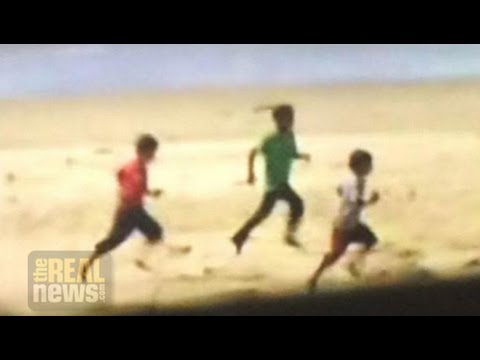 Israel’s foreign ministry issued a report defending the conduct of Israeli troops in last summer’s Operation Protective Edge. It claimed the lives of at least 2,220 Palestinians, 1,492 civilians. 513 of them were children. 73 Israeli soldiers were also killed. The 280-page study states that Israeli troops adhered to international law and that their actions were legitimate. It blamed Hamas militants for much of the damage. The report preempts an inquiry by the UN Human Rights Council into the conflict, which Israeli Prime Minister Benjamin Netanyahu dismissed.

Now joining me to discuss all of this is Vijay Prashad. He is the George and Martha Kellner Chair in South Asian History and professor of international studies at Trinity College. His latest book is Letters to Palestine: Writers Respond to War and Occupation.

Thank you so much for joining me, Vijay.

VIJAY PRASHAD, PROF. OF INTERNATIONAL STUDIES, TRINITY COLLEGE: Thank you for having me.

PERIES: So Vijay, tell us about the report and what it contains.

Now, this is of course the very long report. A few days before the report came out the Israeli military, basically the inspector general, had closed an investigation into one specific case which was fairly controversial. And I think, if you look at this particular case, it shines a different light on the Israeli report in general. You remember the Israeli report says that there was no incident of unlawful targeting of civilians. That they regret civilian deaths, but there was no deliberate targeting of civilians.

Well, the one incident was from mid-July of 2014, when four young boys between the age of 9 and 11 were playing on the beach in Gaza. They were playing hide and seek. There was a football, a soccer ball being kicked around. And they were within sight of the main hotel in Gaza, which housed the foreign correspondents. There were two bombing attacks on these four children. The first one alerted the attention of the international press corps, which happened to be sitting in the hotel. And Peter Beaumont of the Guardian witnessed the second bombing run, which killed all four children and injured several of their cousins who were playing with them. These are children of fisher people. They were playing among fishing boats.

Israel says that they had intelligence that Hamas’s naval unit was based on that beach, and that these four children essentially were Hamas naval operatives. They were terrorists, and therefore the targeting of these four children was legitimate. At the time witnesses said even from hundreds of meters away it was evident that these were children and that they were playing on the beach.

So Israel’s 277-page report goes through a series of incidents which they say had regrettable loss of civilian life, but there was no deliberate targeting of civilians. This one particular case demonstrates that we have to take that Israeli report with an enormous grain of salt.

PERIES: And further to that, Vijay, what does it say about the attacks on the UN schools that took place?

PRASHAD: Well, the United Nations had earlier this year produced a report showing that their schools had not only been attacked by Israeli munitions–you see, right when these UNRWA schools, these UN schools had been targeted, they had become shelters for Palestinians fleeing their homes. Just when they were targeted, the head of UNRWA said that this is a day of great shame, because an international state, a member state of the United Nations, is targeting UN buildings which they knew were shelters. In other words, UNRWA had sent the Israelis the exact coordinates of these schools, saying these are shelters. And they had been targeted with live fire, and people were injured and people were killed.

So at the time they said that yes, these were Israeli bombs. And they left it at that. But the report recently showed, confirmed that these were Israeli attacks. And they proved rather conclusively that there was no evidence of any firing by Palestinian resistance from within the vicinity, even, of these schools which the Israelis had struck. In other words, the UN report was actually an indictment of this argument that the Israelis are making, that their attacks on civilian infrastructure only take place because the civilian infrastructure is being used by Hamas to strike against Israel.

So the UN report itself demonstrated that that argument by Israel is not true at all.

PERIES: And Vijay, we know some 500 children had died in these attacks. Is there any reference with that in the report?

PRASHAD: Sharmini, it’s important to say that firstly, the report whitewashes the killing of the children. It doesn’t really pay any special attention to this. And there’s a good reason why the Israeli military hasn’t paid special attention to the question of children. Until recent days, until early June, it was almost inevitable that in the UN secretary general’s annual report on children in armed conflict, that report was going to sanction Israel for putting civilians, and children particularly, in harm’s way.

You know, UNESCO, the UN agency tasked with the welfare and education of children, had also very strong words about the targeting of children inside Gaza. And so it had become a fait accompli, that the UN secretary general’s report would censure Israel for targeting children in Gaza in a time of conflict. Well, the United States, particularly the U.S. ambassador to the UN, Samantha Power, lobbied against the inclusion of Israel in that list. And in early June, UN Secretary General Ban Ki-Moon buckled under U.S. pressure and did not allow Israel’s name to enter this annual list, which would have included Israel beside, say, ISIS and other organizations like that. Boko Haram, et cetera.

So under intense American pressure Israel was removed from that list, which was published in early June. So it’s for good reason that the Israelis are ducking the question of the 500 children that were killed by Israeli bombs in Operation Protective Edge in 2014.

PERIES: And in my intro, Vijay, I had mentioned that the UN Human Rights Council is about to take this issue up. What is it that they’re going to be taking up, and what will it lead to?

PRASHAD: Well, the first answer we don’t know, because the report hasn’t been published. But I mean, we should expect that given the kind of reports coming out of the UN system, these are the sorts of reports that the Human Rights Council team is reading. After all Israel, just as it refused to collaborate, to allow access for the Goldstone commission which investigated the 2009 bombing of Gaza, in the same way Israel has refused to allow this particular human rights council’s commission access to investigate this directly.

So if we assume that the report is going to utilize UN reports that have already come out, it will be an indictment of Israel. But again, if we go back to the example of 2009, to the Goldstone commission, when that report came out, then-US ambassador to the UN Susan Rice lobbied very hard to sink that report, not permit it to go any further in the UN system.

So if this report is an indictment, as I assume it will be, of Israel, then the bluff has to be called against the International Criminal Court’s prosecutor. Because if they get a strong report out of the Human Rights Council, since Palestine is a member of the International Criminal Court, I think it behooves the special prosecutor in the Hague to open a file on Israel and start a much more thorough investigation.

PERIES: Vijay Prashad, we’ll be following this story. And I hope you’ll join us to continually give us updates on the developments at the UN on this.