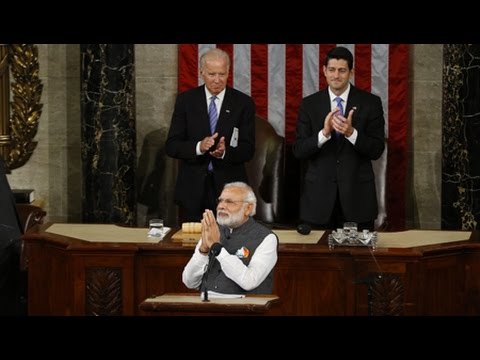 Prime Minister Narendra Modi of India addressed the U.S. Congress on Wednesday, calling for stronger economic and military ties between the two countries. He said that India and the U.S. have overcome the hesitations of history, and hailed both countries’ democratic principles. He also called the U.S. an indispensable partner for India.

Joining me now to discuss all of this is Vijay Prashad. He is the George and Martha Kellner Chair in South Asian History and professor of international studies at Trinity College. His latest book is The Death of the Nation and the Future of Arab Revolution.

VIJAY PRASHAD: Thanks so much.

PERIES: So, Vijay, Modi’s visit. What was he trying to accomplish in this visit?

PRASHAD: Well, Modi’s an interesting man. He, you know, is eager to make a very close relationship with the United States. This, indeed, has been the position of this political party and its trajectory since India got independence. The forerunner of Modi’s BJP was the Bharatiya [inaud.] and in 1947 itself, the Bharatiya [janson] and its ilk wanted to push for very close ties with the United States. They were firmly anti-Communist in their bent, and that’s what they wanted.

Well, unfortunately for them, for the next 50-odd years, India took a kind of non-aligned position vis-a-vis the Soviet Union and the United States, and in fact was deeply suspicious of the United States. Mr. Modi, of course, wants to have a very close relationship with the United States, and that is what he demonstrated in this, which was his fourth visit to the United States. He addressed the joint session of Congress. He’s become very close, apparently, with Mr. Obama. In fact, they are on a first-name basis. And he said something quite dramatic in his speech to the joint congressional sitting, where he said that he, in fact, honored the American war dead who were in Arlington, and said that America is essentially a force for good in the world. You might remember, he also said that America plays a crucial role in Afghanistan.

This is very interesting, because it’s a departure from the previous consensus in Indian foreign policy.

PERIES: Now, Vijay, there was a report that we actually published done by Newsclick about the military advancement that he wants to make along with the United States, and that a large part of this visit was about that. I was wondering if you could comment on that.

PRASHAD: Well, yes. Because this trajectory of Mr. Modi, and he, himself has no problem with American military power around the world, we [are to] understand that previous heads of government in India were deeply suspicious of American goals overseas and the use of American force. Because Modi has no problem with that, he has been eager to deepen the relationship between the U.S. and Indian military.

Earlier this year, Defense Secretary Ash Carter was in Goa, where he was meeting with Indian military chiefs, and they were basically firming up an agreement which has now gone through all the logistical exchange memorandum of agreement. And what this logistical exchange MOA does, essentially, is allow the United States and India to exchange logistical material, including fuel. This means that American military hardware, and you know, the ships and planes, et cetera, can refuel in India. It’s very unlikely, you’re not going to see an Indian, you know, ship coming in, military ship, coming into American waters to refuel, although an Indian vessel might refuel at an American base in the Gulf.

But the real thing is that this memorandum of agreement would allow American aircraft and ships to refuel and to get logistical supplies in India. Why this is important is during the Iraq war in 2003, the Americans were eager to have the Indians both provide troops in Iraq, which the Indian parliament refused, and to allow U.S. planes to refuel in India.

So this deepening of ties, military ties, I think has been a significant gain for Mr. Modi’s party, and indeed this allows India to become part of another lily pad, essentially, for the projection of American power.

PERIES: Now, part of the agreement discussed between the two countries was the Indian purchase of a number of arms, and planes, and so on. What else was contained in that, in those talks, I should say, and why does India need to buy weapons from the United States?

PRASHAD: This is a very good question. You know, Mr. Modi’s signature slogan was “[Made] In India,” in other words, to increase Indian industry. And he has been criticized for his eagerness to buy weapons from elsewhere. Why doesn’t India create its own weapons industry if it needs to have weapons? You know, India is, according to estimates done by the group in Sweden that collects data on arms buying and arms selling, India is one of the largest arms purchasers in the world. And it buys an enormous amount of those arms from the Europeans, from the Israelis, and from the United States.

So this is an issue that I think Mr. Modi will have to deal with. Why is he so eager to sign arms deals with the United States? Why is India so eager to build up its military beyond its needs, in a way? And some people suggest that this is not only a part of India’s old antagonism against Pakistan, but also it is a buildup, as part of the so-called encirclement of China. And India here, particularly Mr. Modi’s party, is eager to have a relationship with the United States putting pressure on China.

But Sharmini, the main purchases that India is purported to conduct is to buy six nuclear reactors. This is, of course, not entirely germane to the question of the military, although it is linked, because India is not only a nuclear power country but is also a nuclear weapons country. Illegal, completely, because India is not a signatory to the Non-Proliferation Treaty, and therefore is outside the purview of international law, as far as its nuclear situation is concerned.

But these six nuclear reactors will cost India to the tune of $30 billion. And to sweeten the deal with Westinghouse, which is the American firm that essentially is going to provide these reactors, to sweeten that deal the Indian government has agreed to a kind of insurance pool of $250 million in case of accidents. The reason the government has to do this is that the Indian parliament in 2010 passed a bill that refused to allow either limited liability or no liability to companies like Westinghouse if there is a nuclear accident.

PERIES: Interesting. Vijay, I thank you so much for joining us today.