Vijay Prashad: Libyan politics characterized by instability and the lack of commitment to bolster civil society and protect minority rights

Vijay Prashad: Libyan politics characterized by instability and the lack of commitment to bolster civil society and protect minority rights 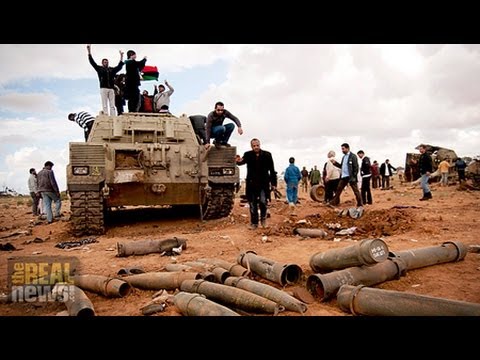 JESSICA DESVARIEUX, TRNN PRODUCER: Welcome to The Real News Network. I’m Jessica Desvarieux in Baltimore. And welcome to this edition of The Prashad Report.

Now joining us is Vijay Prashad. Vijay Prashad is the Edward Said Chair at the American University of Beirut, and his most recent book is The Poorer Nations: A Possible History of the Global South.

Thank you for joining us, Vijay.

DESVARIEUX: So, Vijay, today marks the third anniversary of the intervention in Libya. What exactly are your thoughts?

PRASHAD: Well, you know, it’s very hard to have a simple, you know, statement about the Libya intervention, about what has happened in Libya over the past three years. As you know, I was very much opposed to the NATO intervention. But, of course, I am 100 percent for the Libyan people.

The outcome of what happened three years ago has been quite catastrophic for the Libyan people. But I think it would be unfair or maybe not judicious to pin the entire blame on what has transpired over the past three years on the NATO intervention itself.

Of course, it’s true that NATO intervened. It had a certain, you know, interest in how it intervened. It attempted to put its political people in charge in Libya. And I think that was one of the major reasons for the enduring political crisis in Libya.

I mean, the political crisis is really the central issue. You know, what’s happened is that these spectacular incidents, such as the seizure of a oil tanker off the coast of Libya by U.S. Navy SEALs, captures the attention of the public. But I think the more important issue is what’s happening inside the General National Congress, the main legislative body in Libya.

You know, this National Congress was meant to give up its mandate in December. It refused to do that. It extended its mandate for another year. It’s tried to hold on to power. There is a sense that it’s not democratic at all, you know, not only vis-à-vis the people who so-called elected it, but vis-à-vis the many issues that have been raised by the public. This National Congress has in many ways suffocated any attempt at growing civil society. You know, any time minority groups have asked for their language questions to be taken up, such as the so-called Berber or the Amazigh population that are in the northwest of the country, this General National Congress has subdued their claims, you know, and has lost, I think, important allies. So this is one major issue.

And, you know, you’ve seen over the course of the past year, you know, armed militia groups enter the Congress, threaten congresspeople with their lack of legitimacy, and indeed threaten them to such an extent that the Congress recently abandoned its own building and moved into a five-star hotel, where they felt there was more security. I mean, things have gotten so bad that about ten days ago, last Tuesday, in fact, the prime minister of the country, that is, the man who heads the legislative body, the Congress, fled Libya in the middle of the night: Mr. Ali Zeidan took a private plane and went to Europe.

This political crisis has not been solved, and it’s not been helped at all by the external actors, who have been emboldened in Libyan politics as a result of the NATO-Gulf Arab intervention. You know, they’ve brought their own battles into Libya, so that they pushed this Congress to go after the Muslim Brotherhood. You know, this is the major agenda of Saudi Arabia at this time. And this is, of course, a short-sighted thing, because whereas in Tunisia or in Egypt the state has been stronger and has been able to withstand this attack against the Muslim Brotherhood, in Libya this has made the state even more fragile.

I mean, if you take this political crisis and expand it now eastward, the east of the country where two-thirds of the oil resides has attempted to get not autonomy, not independence, but over the course of this three years a greater deal for the amount of oil, for the wealth that comes into the country. And because they haven’t been able to craft a deal with a Congress that’s—they see as nepotistic, as a den of thieves, as it were, the factions in the east, the militias in the east have been stopping oil pipelines. They’ve been creating major havoc at the transfer stations. And most recently, in the province of Barqah they took over the main port, where they have decided to—you know, they basically capture ships and lower this oil on and send it out to the market overseas. It was one of those ships that was kidnapped at high sea by the Navy SEALs.

So this oil question in the east combines the political crisis but doesn’t actually—is not actually the author of it. You know, the oil is not the issue here. The issue is there has been no developed political institutions, there has been no allowance to develop civil society.

And this, by the way, you know, is made even more clear as a consequence of the NATO intervention, because NATO intervened, and in such a way, with such heavy aerial bombardment, it did not even allow—or want, perhaps—the militias to form into a coherent army. So what happened was the militias, which were city-based, which were town-based, remained external, they remained separate. There was a Misrata militia, militias of Benghazi, militias, you know, of the different towns and cities, [incompr.] Ra’s Lanuf, etc. These militias were never under one unified command, and they remain over the course of these three years as a force out of control of the central authorities. Militia might get a stipend, you know, they get paid by the government, but they’re not under its control. This is a very poisonous consequence of the way in which NATO intervened.

And, by the way, NATO’s favorite general, General Khalifa Haftar, who used to live 15 minutes away from the CIA headquarters, you know, in Vienna, Virginia, who was parachuted into Benghazi with the hope, in March 2011, that he would be able to take command of the revolution, remained on the sideline and has recently attempted a coup d’état. Mr. Haftar, who claims to have some support in the east, is now going to create even more mischief, I fear.

DESVARIEUX: Alright. Vijay Prashad, we always appreciate your analysis. Thank you so much for joining us.

PRASHAD: Thank you very much.