US Deploys More Troops to Syria to Fight ISIS 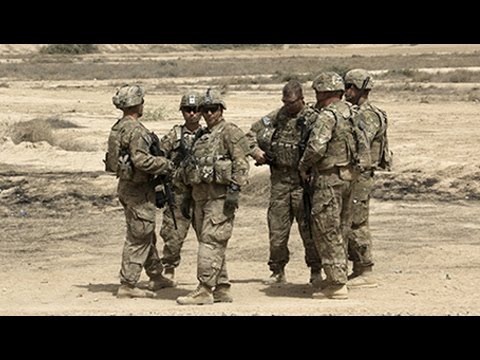 At least 400 U.S. Marines and Army Rangers are being deployed to Syria. This is to help local forces take on Islamic State in its de facto capital of Raqqa. This is according to Colonel John L. Dorrian for the American-led command fighting ISIS in Iraq and Syria.

It is the first time a major commitment of troops for the Trump administration, almost doubling the known U.S. presence in Syria to about 900 soldiers. U.S. military says the troops will be working with two Syrian partners fighting ISIS, but will not be on the front lines. The increase is coming after the Kurdish-dominated Syrian Democratic Forces successfully cut off the main road out of Raqqa in preparation for a final assault to capture the city.

Joining us today to discuss the potential implications of this is Vijay Prashad. Vijay is the George and Martha Kellner Chair in South Asian history, and Professor of International Studies at Trinity College. He’s also a regular contributor here at The Real News Network. He’s also the author of many books, among them: “The Death of the Nation and the Future of the Arab Revolution.” Thanks for joining us here, Vijay.

VIJAY PRASHAD: Thanks a lot, nice to be with you.

SHARMINI PERIES: Vijay, the operation to retake the city of Raqqa from the Islamic militants is said to parallel that of the retake of Mosul. Now, the toll on human life was, of course, devastating in Mosel. So, looking at that example, what can we really expect in terms of human devastation to be as they surge into Raqqa?

VIJAY PRASHAD: Well, you know, in Mosul the United Nations has estimated that there are about 200,000 displaced people from the city. And it appears that the city has taken a very great hit from the attempt to take it away from the Islamic State. So, you know, it’s not easy to take cities back. As we have seen over the course of these last few years.

The fight to take a city has been breathlessly devastating — lots of civilian casualties; great number of people displaced; and the fight often turns in the end to street-by- street fighting and then fighting over, for instance, water supplies and electricity.

In fact, you know, the battle in Aleppo may have been formally over, but only recently in Northeast of the city the Syrian Arab Army, that means the government’s forces, has been able to take the main water source to protect the water source for the city of Aleppo. You saw that as well in Damascus where there was a battle over water. So, these battles are very, very dangerous. We know, as I said, 200,000 displaced out of Mosul already and the battle there is not completely over.

In Raqqa, the figures for how many people are inside the city are not very clear. The city used to be about 200,000 as its population. It’s estimated it’s about half that size now, which means that, you know, about 100,000 people are going to be at the front lines.

SHARMINI PERIES: Vijay, recent analysis provided for us by Associated Press has argued that U.S. is putting itself in a potentially explosive position in Syria. Some U.S. troops are apparently acting as a buffer zone between Turkish military and the U.S.-backed Syrian Kurds in the northern part of the country.

So, Kurdish militants will be retaking Raqqa with U.S. support. However, the Turks are vehemently opposed to any involvement of the Syrian Kurds in being involved in a major operation of this sort.

So, what concerns do you have regarding the presence and the escalation of U.S. troops in Syria, given the presence of the so-called ‘allied parties’ openly being hostile to each other?

VIJAY PRASHAD: Well, you know, yes there is going to be now, I think the 11th Marine Expeditionary Forces are entering — about 400 of them will go into the area around Raqqa. There are already people from the Army Rangers there. There are several 100 Special Forces that have been with the Syrian Democratic Forces that’s the largely Kurdish groups that have been backed by the United States. So, there have already been quite significant numbers of U.S. troops in the area. But mainly in a training, and as I have mentioned, in a second, in a show of force.

But let’s first untangle some of the problems here. Because it’s not merely the Americans who are going to act as a buffer, but it’s also Russian troops that have already taken their places of buffer between the Syrian Army and, you know, the American-backed Kurdish forces.

So, what’s the complexity here? On the one side, you have the Syrian Arab Army which is the government’s forces, which has taken, you know, substantially taken Aleppo, and has moved East of Aleppo towards the city of Manbij, which is held by the Syrian Kurds, the Syrian Democratic forces, backed by the United States. Behind these forces, that is to say in the West of Aleppo, there is the city of Idlib, where the various, you know, radicals and extremist groups that have been expelled from Aleppo have now taken a hold. And they are largely in the Town of Idlib, which is as I said, to the West of Aleppo. So, you know, you have the Syrian Arab forces moving up towards Manbij.

From the north, you have the Turkish military very interested in creating what they call a buffer zone in northern Syria — that is the Turkish military entering a substantial portion of northern Syria to create this buffer zone, to prevent the creation of any kind of Kurdish enclave. And in fact, on Friday you know, the President of Turkey, Erdogan, was in Moscow where he had meetings with Vladimir Putin. And part of that meeting was, you know, the Turks making clear that they were very interested in this buffer zone. And the Russians seemed to not say that this is a bad idea.

This kind of complexity where you have the Syrian government, the Russians, the Turks, the Americans, the American-backed forces — it’s not clear what’s going on here. And this was made even more dramatic in the towns around Manbij, when the Army Rangers decided to put on American flags on their vehicles and drive around in a show of force. Essentially saying, you know, perhaps to the Turkish forces more than ISIS, that, “we are here.”

So, you know, Sharmini to unravel this is not very easy and in fact, this is the reason why the United States government, the Russians, etc., have been very cautious in declaring their war-ins. It’s not clear what they’re doing. Are they pushing to Raqqa? Or are they jockeying, you know, to figure out who is going to be allowed to do what by their sort of, you know, once-in-a-while allies.

SHARMINI PERIES: Vijay, there’s a lot of concern on the left here in the United States that both Obama and now Trump have been slowly escalating the war on Syria without any debate or discussion in Congress. In fact, a recent article entitled, “Escalating the War on ISIS without Debate or Authorization” by the senior Editor of the American Conservative, Daniel Larison. He wrote that neither the Obama nor the Trump Administration has ever had to justify a policy of trying to fight a war alongside mutually antagonistic forces.

And neither of them has ever been forced to do so by permission of the Congress or the President. He argues that the President has no authority to deploy U.S. forces into Syria. And especially not to act as a buffer between forces of allied government and proxy forces inside Syria. Now, what do you make of this statement?

VIJAY PRASHAD: On the one side, it’s an odd statement because, you know, to be frank, the United States has for 50, 60 years conducted wars without Congressional approval. In the 1970s there was an attempt by a more perhaps, shall we say, a reform-minded U.S. Congress to reign in the CIA with the Church Commission. There were various amendments about preventing proxy funding. And this was why you had the Iran Contra scandal in the 1980s.

You know there was an attempt by Congress in the 1970s to put the fetters on a White House, which is basically acting as if there was no need for Congressional oversight or approval. Well, since the proxy wars of the 1980s; whether the dirty wars in Central America or the dirty wars in Southern Africa, you know don’t forget the United States backed some very vicious forces in Angola, in the war in Mozambique, etc.; and then the culmination of all this was the proxy war in Afghanistan. You know, this produced, in a sense, the grammar of how the United States operated overseas.

So, you know, it’s fine for the Editor or the, you know, people at the American Conservative to, you know, rub their hands and, you know, be very distressed by the fact that somehow their constitutional niceties are not being followed by the White House but let’s be frank, this American system is thus now that there’s kind of an imperial presidency and there’s an easy way to authorize U.S. troops to go and have proxies.

You know, there’s even the Joint Special Operations Command which is directly under the command of the U.S. President. There’s no need for Congressional oversight here. I mean, you know, this is the system that exists. It’s too much, I think to, or perhaps naïve, to believe in the ideals of how it should be. Yes, there should be a reform movement in the United States that says that these wars cannot be done without Congressional approval.

Yes, there should be a reform movement that says that too much is spent on the military. All that is correct but I think merely to stand on principle against this, is I think, to go against the tide of a very long and disturbing history.

SHARMINI PERIES: All right, Vijay, we’re going to continue our conversation in a second segment. So, stay tuned. We’re going to talk about Bush’s revival. That’s George W. Bush. Thank you so much for joining me today, Vijay.