How Iran’s Fight Against ISIS in Iraq Helps American Interests 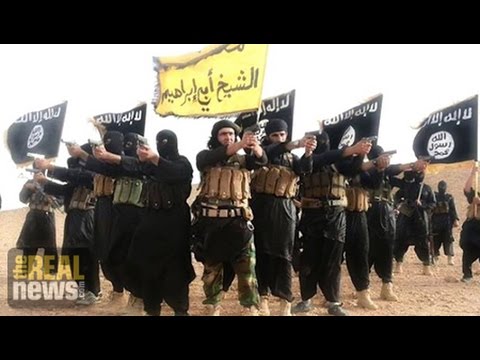 Now joining us is the man behind the report, Vijay Prahad. He is a professor of international studies at Trinity College, and his most recent book is The Poorer Nations: A Possible History of the Global South.

DESVARIEUX: So, Vijay, what news have you been tracking this week?

PRASHAD: Well, obviously the week begins with Prime Minister Netanyahu of Israel coming to the U.S. Congress and talking about the immediate problem for him, which is, of course, his reelection, but also fearmongering, really, about Iran. You know, he has wanted to scuttle the U.S. deal on Iran from almost the very beginning. So that’s one part of the story.

Meanwhile, actually, if you look at the facts on the ground, the situation is quite different in terms of U.S. relationship with Iran. And the, I think, test case of that difference has been in Iraq, where the Iranians have been in a sense taking over a position that the United States felt that it had–in other words, providing support to the Iraqi Army, not only air support, but tactical and strategic support on the ground.

So who provided the air power? Well, the Iraqis claim that this is the Iraqi Air Force. This is perhaps likely. But who is providing assistance on the ground? I mean, as I said, there’s some uncertainty whether these are Iraqi militias or Iraqi army full-fledged on the ground. It appears to be largely Iraqi militias that are doing much of the ground fighting. And alongside them a few days ago arrived a major general, a really important character in the Iranian military, the leader of the Quds Force, General Suleimani is on the ground directing or helping direct some of the attacks against the Islamic state forces in Tikrit. So it’s a very interesting development on the ground, that the Iranians are there, full-fledged, providing strategic and tactical support.

When this was raised to the United States, you know, what do you say about this? You haven’t been on the ground here, you haven’t been providing air support, and the United States government has said they welcome Iranian participation in the battle of Tikrit. This is, of course, something that I think Mr. Netanyahu really needs to think about.

DESVARIEUX: And, Vijay, I mean, I’m thinking of this from a more neoconservative perspective. They would automatically charge the U.S.’s presence not being there and say, you know, this is an example President Obama not leading. What do you make of that argument?

PRASHAD: Well, look, the point that President Bush made when he decided to go to full-fledged war in Iraq was that we need to go into Iraq so the Iraqis can stand up. In other words, this was not about American influence. This was Bush’s own framework. It wasn’t about America colonizing Iraq, but about America providing the Iraqis the opportunity to create their own state.

Well, interestingly, the Iraqis are, as it were, standing up. Now, the question is: the state is extremely weak. It’s relying on nonstate actors. And it is of course relying on its neighbor Iran. So in a sense this is not unlike what President Bush had expected would happen. It’s not a question of President Obama not leading from the front. This is actually an outcome that the neoconservatives themselves in their brightest moment were hoping for. Of course, they may have had other things in mind when they merely said we would like Iraqis to stand up. I think an Iraqi could turn around now and say, this is our fight, and we have asked the neighboring country to join us. We don’t need the United States at this point to give us assistance.

DESVARIEUX: And at the end of the day, do you see that as being a policy that is really in the interests of everyday Americans? Because essentially now those in the Middle East, those actors, where threats like ISIS really, really do affect them directly can now pick up the fight and fight against these sort of extremist groups?

The one problem here, of course, is that there is a deep sectarianization of security, and it would be, I think, far better if there was the possibility of having other countries involve themselves from the region. You know, if Turkey, for instance, actively closed its border and didn’t allow this to become a sectarian regional security question–in other words, where the so-called Shia axis is acting against the Sunnis–it’s very important, I think, for the region to look at this in a much more broadly post-sectarian way, rather than to allow security to become a sectarian matter.

DESVARIEUX: Alright. Vijay Prashad, always a pleasure having you on. Thank you for joining us.