Libyan Chaos and the Islamic State (1/2) 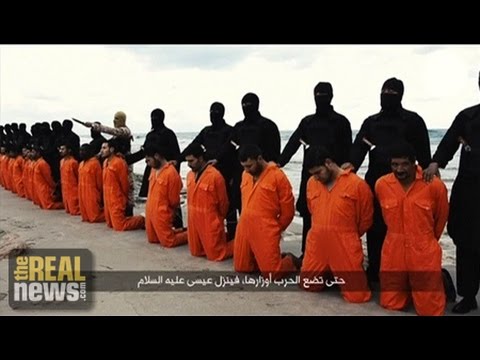 SHARMINI PERIES, EXEC. PRODUCER, TRNN: This is The Real News Network. I’m Sharmini Peries, coming to you from Baltimore.

In fear that Libya could become the satellite of the Islamic State, Egypt’s air force, joined by the Libyan Air Force, with the support of Saudi Arabia, bombed the Islamic State targets inside Libya on Monday, just a day after ISIS released a video appearing to show the beheading of 21 said to be Egyptian Christians. In a televised statement, President Abdel Fattah el-Sisi confirmed that Egypt was officially bombing ISIS targets in neighboring Libya.

Now joining us to discuss all of this is Vijay prashad. Vijay is the George and Martha Kellner Chair in South Asian History and professor of international studies at Trinity College. His latest book is No Free Left: The Futures of Indian Communism. That’s by Leftward Press 2015. And he’s the chief editor at Leftward as well. And he is also the author of Arab Spring, Libyan Winter.

PERIES: So, Vijay, now, in a New York Times editorial board editorial this weekend, Bernadino León, the United Nations envoy to Libya, said Libya has the same features of potentially becoming as bad as what we’re seeing in Iraq and Syria. He says the difference is that Libya is just a few miles away from Europe. The proximity seems to bother him. Why?

PRASHAD: Well, because he’s European. And somehow if the danger comes into Europe, that’s worse than if Arabs are suffering the blight of the Islamic State. In fact, the Islamic State knows this, which is why in the execution video that was shot in Libya, they very pointedly said we are now this side of the Mediterranean, but soon we will be in Rome. And that, I think, is a direct threat to the West, a direct provocation to the West. It was also, of course, a direct provocation to Egypt, because they killed 21 Egyptian laborers who were in Libya and were kidnapped during the course of this year. So, yeah, it bothers Mr. León more because this is a direct threat to Europe, whereas previously they saw this merely as a containable issue.

PERIES: Right. Vijay, let’s get into Libya. Describe for us what the previous attacks on Libya, the conditions it has left, and what is happening in terms of governance in Libya at the moment.

PRASHAD: Well, Libya has been in a state of chaos since 2011. You know, periodically you’ll get people at the United Nations, or indeed envoys from other countries, saying Libya is on the brink of chaos. This is to play with language. It’s been a very complicated situation since 2011. The NATO bombardment essentially dismantled the Libyan state, destroyed the Libyan state, and left Libya at that point with an extremely fractious set of armed actors, the so-called militias. These militias have to some extent calcified around different cities–the city of Misrata, city of the Zintan, city of Benghazi, etc., and some of them have taken political character.

So what has happened is they’ve also divided up along two axes. Some of them have moved towards a far more Islamist or radical Islamist kind of direction. And others are in the kind of Muslim Brotherhood mode. It’s the Muslim Brotherhood type of groups that are now in power in Tripoli. And they have cultivated a coalition called Libyan Dawn.

In the other side of Libya, there was a group called Ansar al-Sharia, which emerged after the NATO bombardment. That has been largely broken up by the armed action of a rogue Libyan general by the name of Khalifa Hifter. Many members of Ansar al-Sharia have moved into what is now the Islamic State.

There is another government of Libya. They are to some extent more appropriate, to the Western eyes, and to some Gulf Arab allies. That government is based in Tobruk, which is a few hours’ drive from the Egyptian border in the east of Libya.

So there are many different power centers in the country. It’s extremely fractious. And there’s no real easy answer either to a political solution, or, of course, to believe that the Islamic State can be defeated militarily.

PERIES: And what is this stronghold? How much of Libya is now being controlled by ISIS?

PRASHAD: It’s very hard to say. Just as in Syria and in Iraq the Islamic State operates on a kind of pendulum philosophy, one day they may be in Tripoli conducting an attack. Next day, they have based themselves in the central town of Sirte, or they are in are in Derna, which is a city in eastern Libya.

Derna has been an Islamist stronghold since the 1990s. It was a part of the Libyan Islamic fighting groups’ base. Then it attracted people from Ansar al-Sharia. Latterly, of course, it’s considered the main city of the Islamic State.

But I just want to say that this pendulum swings not only within Libya; it swings all the way down to Mali. So, from Mali there have been the movement of fighters through Chad into Libya and vice versa. You know, this is a regional problem. It shouldn’t only be seen as a Libya problem. Therefore it requires a really serious look at some of the regional dynamics that are at play.

PERIES: Very well, Vijay. Thank you so much for joining us today.