Prof. Vijay Prashad discusses the significance of the of anti-ISIS protests after the immolation of a Jordanian pilot and the possible future outcomes of these events

Prof. Vijay Prashad discusses the significance of the of anti-ISIS protests after the immolation of a Jordanian pilot and the possible future outcomes of these events 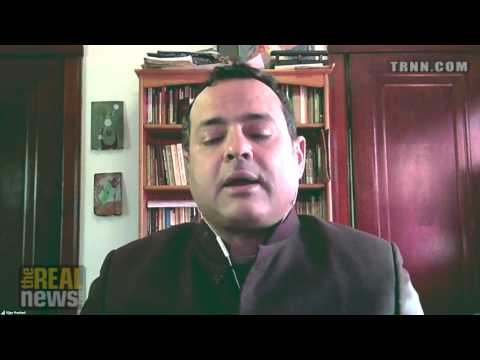 JESSICA DESVARIEUX, TRNN PRODUCER: Welcome to The Real News Network. I’m Jessica Desvarieux in Baltimore. And welcome to this edition of the Prashad report.

Now joining us is Vijay Prashad. He is a professor of international studies at Trinity College, and he joins us from Northampton, Massachusetts.

Thank you so much for joining us, Vijay.

DESVARIEUX: So, Vijay, what are you tracking this week?

PRASHAD: Well, the most dramatic event in the Middle East was the video of the killing, the murder, the immolation of Mouath Kasaesbeh. He was burned to death in a cage, perhaps somewhere in northern Syria. No prisoner of war should be treated in that manner. It was, of course, inhumane in itself, but also a violation of all laws of war.

Of course, it’s also important to recognize that the people doing this terrible act to this young pilot are greatly damaged by wars that have lasted more than a decade. They claim that they have seen people, children as well, burning in front of their eyes from aerial bombardment. And this is a great damage done to them. Of course, this in no way justifies the kind of violence they utilized against Lieutenant Kasaesbeh, which is why his home country of Jordan is up in arms against what happened at the hands of the Islamic State.

DESVARIEUX: Okay. So what are you anticipating now that the event took place and people are up in arms? What are you predicting is the aftermath? What’s the significance of even the action itself?

PRASHAD: Well, the first and most immediate event was mass demonstrations in Jordan; in Qatar, where he’s from, his father making statements about the need for revenge; King Abdullah saying that they’re going to hit them hard. And, in fact, fighter jets went and struck targets in Raqqah and in other places. There is Jordanian fighter jets went and struck targets in Syria of the Islamic State.

Apparently, the Islamic State claims that an American aid worker, whose name is Kayla Jean Mueller, was killed by one of these attacks. She had been held as a hostage. This is, of course, unconfirmed.

But this being the immediate reaction, there are two other things that I think one needs to look for. One way in which this might shake out is a way similar to what happened in Iraq in the mid 2000s. You know, in Iraq it’s worth saying again there was no al-Qaeda before the American invasion of 2003. But shortly after the occupation of Iraq went into effect, a Jordanian militant by the name of Abu Musab al-Zarqawi came and settled in the Anbar province in Tal Afar and created the al-Qaeda Mesopotamia. Well, Mr. Zarqawi was in a sense temperamentally more anti-Shia than anti-American, and he began a terrible wave of bombings in areas where there was a large population of the Shia.

And this created revulsion against him, so much so that even Osama bin Laden released a statement saying, Mr. Zarqawi, cool it, we have a common enemy, don’t go after Shia Muslims. So that turned many people in Iraq against al-Qaeda and provided the groundwork for the defeat of al-Qaeda at the time. This al-Qaeda, of course, later morphs into the Islamic State of Iraq, which becomes then ISIS.

So the one outcome of this could be that there’d be widespread revulsion in the Arab world against this very brutal attack on a young pilot and people will turn against ISIS in large numbers. The other outcome, which may be less favorable, is that there is a section within Jordan that is sympathetic to ISIS. They feel that Sunnis are under some kind of threat. They are angry with the Jordanian government for joining the Allied attack on ISIS. And they might start to break away from the consensus in the country.

It’s more likely that the first scenario will come to play, where people are going to turn against ISIS, saying even if we sympathize with some of your fears, we no longer want to even passively come with you. That is the more likely scenario. The less likely scenario, I think, is worth bearing in mind, which is that Jordan is going to face some serious political crisis in the weeks ahead.

DESVARIEUX: Alright. Vijay Prashad joining us from Massachusetts, thank you so much for being with us.