Kristin Seale is one of four women candidates backed by the Democratic Socialists of America to win their recent primaries in Pennsylvania. Seale says that a bold progressive message, coupled with authenticity, can reach swing-state voters

Kristin Seale is one of four women candidates backed by the Democratic Socialists of America to win their recent primaries in Pennsylvania. Seale says that a bold progressive message, coupled with authenticity, can reach swing-state voters 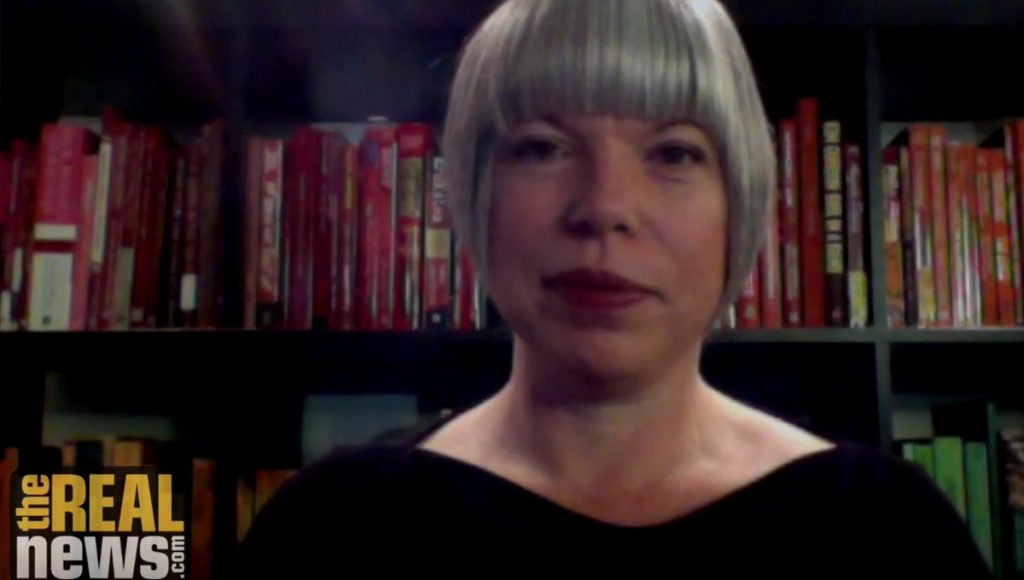 That is talk of a blue wave in 2018, with Democrats looking to take midterm races across the country. But blue, like any color, has different shades. And one of those shades, you could say, is bold, for bold progressive; the bold progressives who are challenging races across the country, inspired by Bernie Sanders. One of the states where they have won a key victory is Pennsylvania, where earlier this month, four progressive women candidates to the state General Assembly swept the Democratic primary. They were endorsed by the leftist group the Democratic Socialist of America, or DSA. One of them joins me now. Kristin Seale is running for the state General Assembly in the Philadelphia area. Welcome, Kristin.

On your website you call yourself a bold progressive. Explain the message that you brought to voters, and how you think that contributed to your victory.

KRISTIN SEALE: Absolutely. Thanks for having me. I think that I brought a progressive platform to voters. The DSA canvas, which is a really big part of how we notched this win, was based around a Medicare for All message. We went to the doors also to listen to voters in the district about what’s affecting their health and lives, what’s working for them and what’s not.

And so I think that the combination of bringing a social security net message with some really strong active listening about what people want and need is, is really the message. You know, I, I stand for a lot of left progressive issues, and it really starts with making sure that working families and struggling families are acknowledged and that we’re doing what we need to do to support these people in our communities, some of which are myself and my family.

AARON MATE: So your background, as I understand it, is in public health. And from what I know your area is the only one in Pennsylvania that doesn’t have a public health department. Is that right?

KRISTIN SEALE: That’s correct. We live in a really interesting County in Pennsylvania. We have had a Republican war machine that has controlled every level of office in this county since the Civil War. And one of the effects of that is that we are currently the only county in Pennsylvania without a public health department. That’s got incredible impact on the health and lives of people in my community, including we’ve got an outsized, you know, opioid epidemic is huge in this state, and it’s, we’ve barely scratched the surface of the supports necessary to help families that are suffering and prevent excess death. But in my community we have a completely outsized rate of overdose deaths from opiate addiction, as well as a completely outsized rate of children, infant mortality, of children born to women of color. We’ve got a lot of work to do, and that’s one of the places we can start.

AARON MATE: I know on the issue of health care you backed single payer. I’m wondering also, as a former delegate for Bernie Sanders, if you’ve struggled with the issue that many progressives in the Democratic Party have raised, which is whether or not to try to work within the Democratic party system.

KRISTIN SEALE: Right. So, I have come around to a big tent way of thinking. I am convinced that there is a place for us in the Democratic Party. And I know that we don’t see eye to eye with everyone in the party, but I do work every day to build bridges between parties and between people. So I feel like there are ways that we are, even in this cycle in primaries, I think we see across the country, dragging the message to the left. There are things that we adopted as platform planks in 2016 with the participation of Bernie delegates and Sanders and Ellison before the convention that I think have really built some progressive values into the heart of the Democratic message in a way that we never done before.

AARON MATE: And you are running as an openly out LGBTQ candidate. That’s a big part of your platform, rights for LGBTQ people. And you’re also running in a district which has never elected a female representative. Can you talk about just the history you’re making on that front?

KRISTIN SEALE: Absolutely. So, I would be the first Democrat and the first woman to hold this seat in the Pennsylvania House of Representatives in the General Assembly. I would also be the first out queer woman to ever hold a seat. There is currently one out gay legislator in that body, so we’re really excited about the idea that there would be more than one person in the current LGBTQ caucus that’s an actual out LGBTQ legislator. We’re working really hard to build that bench cross the state. I currently hold a school board seat, and I have a friend that made excellent news, Tyler Titus in Erie, winning a school board seat. The first transgender person to win a school board seat, in what is a very conservative area of our state. So I think that both our history making identity politics and our progressive values are really resonating with voters in this state in a way that is surprising people.

AARON MATE: Finally, as I mentioned in the intro, you were part of this wave of four female progressive candidates backed by the DSA. Can you talk about that overall group, which has grown national attention, and what you think all your victories say about the viability of progressive candidates in key states like Pennsylvania?

KRISTIN SEALE: Absolutely. I, we’re talking about my friends Elizabeth Fiedler, Sara Innamorato, and Summer Lee. Ssummer And Sara are in the western part of the state, which couldn’t be more different than where Elizabeth and I are. Elizabeth is in Philadelphia, and I’m in the Philadelphia suburbs. People know Summer’s district, Braddock, I think because of John Fetterman, to a degree. And both Sara, Elizabeth, and Summer and I have one thing in common, which is all of us have some kind of an organizing background.

So part of what I think you’re seeing is that all of us had a grassroots mentality and are the kind of people that went directly out to the electorate, to community and to the voters, to find out how we could serve them through servant leadership. And I think that something that’s different about the four of us that maybe hasn’t been seen in previous cycles is that we’re very committed to being authentically ourselves. And I really think that’s what voters are responding to, that sincerity and authenticity, that standing on principle and standing firm, not just for our values but for the things that our voters are telling us, our constituents in the future, that they need to happen in order to fulfill their human potential, basically, in order for them to actually have the rights that are due to them. I think that we’ve done outreach in a really direct way to people that lets them know that we’re here for them and we’re ready to serve them.

KRISTIN SEALE: Absolutely. It is KristinSeale.com, two Is, no Es in my first name. Or you can find it at ServeThe168th.com.

AARON MATE: Kristin Seale, running for the state General Assembly in Pennsylvania, thanks so much for joining us.

KRISTIN SEALE: Thank you for having me.