Despite U.S. sanctions, medicine shortages, and on-going economic crisis, Venezuela has been quietly implementing one of the world's first nationwide plans to support pregnant women across the country and to humanize birth in Venezuela.

Despite U.S. sanctions, medicine shortages, and on-going economic crisis, Venezuela has been quietly implementing one of the world's first nationwide plans to support pregnant women across the country and to humanize birth in Venezuela. 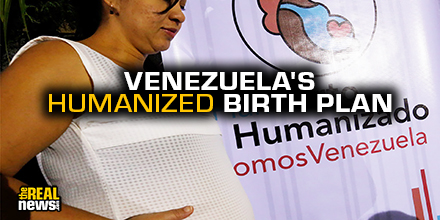 MICHAEL FOX: This is a story you likely haven’t heard. It’s a story about empowerment in unexpected places. It’s a story about hope amid crisis. Venezuela is that county. U.S. sanctions are rattling the economy. Inflation is through the roof. Medicine is scarce and expensive. Hospitals are in bad shape. But according to Health Minister Carlos Alvarado, maternal mortality has actually dropped in recent years.

MARITZA TORRES: I attribute it to the impact of the actions of the National Humanized Birth Plan.

MICHAEL FOX: That’s Maritza Torres. She’s a mother, a grandmother, and a long-time social worker and doula, someone who gives support to women before, during and after birth. She’s also currently one of the trainers of thousands of birth facilitators in a landmark nationwide plan in Venezuela to provide birth support to every pregnant woman in the country.

MARITZA TORRES: The National Humanized Birth Plan was born in July 2017. And it was created because one of the few millennium goals that we couldn’t reach was the issue of maternal death. We had, and still have, maternal death far too high. President Nicolas Maduro took a very heroic step within the terrible context of the multifaceted war that we are facing. And he highlighted that this issue of caring for our women, protecting our women–and particularly those who are carrying life and giving birth–was more important than anything else. And from his own experience as a father, because his children were also born in humanized births, he brought as a top priority, the creation of a national Humanized Birth Plan. And when we talk about a national plan, this is a state policy so that women receive ongoing support.

Usually when we talk about state policies, it means that you have to go ask for an appointment or fill out a bunch of paperwork and it takes a while for you to benefit from the support. Well, this was different. And it was an incredible idea because it created a plan to educate the women and the leaders in the poorest communities where the humble women die during childbirth because they don’t have anyone to attend to them and they don’t have knowledge about how it works. Through these women, these community leaders who participate in women’s movements and other organizations in the Bolivarian process, they said: “I want to be a community promotor of humanized birth,” which is a new figure that was created especially for this plan. They received training and education which was provided by those of us with experience in humanized birth.

With this plan, our dreams are being realized. Because as doulas and birth facilitators, we wanted the women of Venezuela’s poorest communities to also receive this support and this education, this preparation, so that their experience in pre, during ,and post-birth with breast-feeding was harmonious and they wouldn’t have to pay for it. And this miracle was created with president Maduro. He created the plan, and we all jumped on board. And in the beginning, it was amazing because the women came in the thousands wanting to be trained. Of course, we couldn’t train them all at the same time.

The plan said 10,000 women should be trained. Why 10,000? Because according to the statistics, 500,000 babies are born each year in Venezuela. So that would mean that 500,000 were pregnant and had their babies. So the idea is that each of these 10,000 women promotors could accompany 50 women over one year. The idea is that each woman could have support. There’s something important to highlight here. We are not just talking about just giving them classes. This is not about teaching them about a law. This is not about something that is outside of the interests of these women. Sometimes they are alone. Sometimes they are in very vulnerable situations not just financially, but with domestic violence. So it’s important that the women are close to where they live.

The promoter should go do her work in the community where she lives, and she will contact the pregnant women in her neighborhood or the women who are nursing. And she is going to support them and accompany them to live their experience in a more conscious way. We want for women who decide to continue with their pregnancy, because that’s their decision, we want them to be conscious that they need to take care of themselves; that they need to go to the doctor; that they need to take their vitamins; that if there is domestic violence, the Venezuelan state has policies and laws that protect the rights of the women against violence. Many women don’t know, in particular women in the poorest communities. So promotors have the tools and the information, and they help women to become empowered; that they feel that they are no longer alone.

On the day of the birth, the promotor is not going to accompany the mother because we haven’t yet trained birth facilitators or doulas. But what they are going to do is give them the tools. The National Humanized Birth Plan has a key component, which are the pregnancy birth circles. This is a meeting that takes place once a week for two hours. The humanized birth promotor, who was trained to facilitate this, brings the mothers together in their community close to where they live. During these two hours, we do three important things. The first half-hour we do physical activity, which are all prenatal activities. Afterward, one hour of sharing ideas and Shared Reflection over basic issues: food; rest; nutrition; the issue of interpersonal relations, which is so important during pregnancy–strengthening this connection with the baby inside.

We discuss all of these issues that are dealt with in private sector. And after all of this, we do relaxation; creative visualization; creating the place of our dreams; and giving women the same tools that you pay for in the private sector so that they can, within their own context, in their barrio, experience a happy pregnancy. We talk about first, a desired maternity, safe because they are supported and happy; to enjoy maternity. And fathers and family members come to these meetings, and if the mothers have other children. In other words, it’s communal work. Our Constitution has a very important pillar: that is co-responsibility. What does that mean in the world of humanized birth?

When a woman gets pregnant and decides to have the baby, it’s not just her that’s pregnant. It’s her partner, although he’s not there, he’s also pregnant; her mother; her brothers and sisters; her relatives; her other children. It’s a community and how can we help her. Her boss is pregnant if she is working; her friends and neighbors are pregnant; and the Venezuelan state is pregnant, which is co-responsible to care for her life. Because in Venezuela, life is important. Yeah, we have a lot of problems. It’s true that a lot of women still die. There are still places that can’t or don’t want to treat the women. But now, the National Humanized Birth Plan was a brilliant idea from the beginning. The idea is for the promotors to work hand-in-hand with the local Barrio Adentro community health clinics which are located throughout the country in every barrio.

Nevertheless, this aspect hadn’t been implemented as completely as we had wanted. So recently, president Maduro, during an event commemorating the health mission, he said that Barrio Adentro now should assume control of humanized birth. That doesn’t mean that we are going to stop our work, but rather that now this connection is strengthened. The Women’s Ministry does not deal with the medical realm. What we have to do is join the two. And this brings up another fundamental principle of our Constitution and our revolutionary policies. It’s not just a ministry, it’s everything. I am profoundly thankful. I wish everywhere in the world could have an idea about what we are doing here. People need information.

We in Venezuela are suffering under this savage war; ruthless. But we will overcome. We will overcome. Because we believe, and we love this country. I’m 71 years old. And I am happy to be able to serve my country in this area, humanized birth, which is one of the most beautiful things in life. We’ve been at it for three years, fighting for the Humanized Birth Plan, for humanized birth. And this fills me with joy. Sister doulas, midwives throughout the world, you need to know that here in Venezuela we are working for the same cause. The international week for humanized birth is in mid-May, and the slogan is always: Women, be respected; women, demand your rights; women, don’t let them treat you with violence. It’s your physiological process that Mother Earth made you perfectly to have it.

We need to take back our power and the information–the education, the knowledge and consciousness of who we are. That’s what gives us strength. We need to remember that we are women.

Both Parties Honor the Dark Side