Veronica Arreola, assistant director of the Center for Research on Women and Gender and the director of the Women in Science and Engineering program at the University of Illinois at Chicago, says the Planned Parenthood shooting in Colorado is "Domestic Terrorism"

Veronica Arreola, assistant director of the Center for Research on Women and Gender and the director of the Women in Science and Engineering program at the University of Illinois at Chicago, says the Planned Parenthood shooting in Colorado is "Domestic Terrorism" 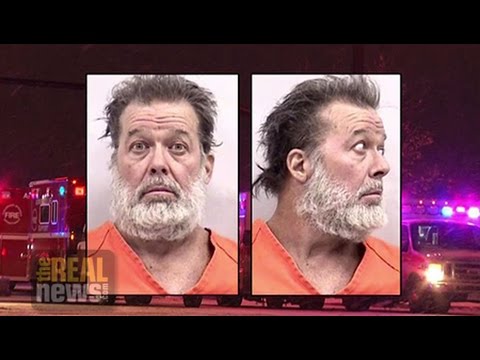 On Friday in Colorado Springs, Colorado a gunman walked into a Planned Parenthood clinic, killing three people and wounding nine others. After his arrest, according to authorities, suspect Robert Lewis Dear said “No more baby parts,” referencing recent videos that many claim were edited to show Planned Parenthood selling fetal tissue for profit. Dear made his first appearance in court on Monday afternoon and will be charged with first degree murder. These attacks, what Planned Parenthood has called domestic terrorism, have garnered national attention over issues of gun control and abortion. In an interview this week Vicki Cowart, the president and chief executive of Planned Parenthood Rocky Mountains said, “We’ve experienced so much hateful language, hateful speech. Such a negative environment has been created around the work that Planned Parenthood does around the idea of safe and legal abortion.”

Here to discuss this tragic event is Veronica Arreola. Veronica is the assistant director of the Center for Research on Women and Gender, and the director of the Women in Science and Engineering program at the University of Illinois at Chicago. Veronica, welcome to the Real News.

VERONICA ARREOLA: Hi. Thank you for having me.

BALL: So after the shooting, Planned Parenthood blamed the hateful language used against abortion providers to talk about why the shooting occurred. This received a lot of backlash from Republicans like Carly Fiorina. On Fox News Sunday she said that linking the pro-life movement to this attack was “typical left-wing tactics”, and went on to say the vast majority of Americans agree that what Planned Parenthood is doing is wrong. That’s why the vast majority of Americans are prepared not only to defund Planned Parenthood, but also to stop abortion for any reason at all after five months. How would you respond to this accusation, and the hateful language of the pro-life movement? And the idea that the hateful language of the so-called pro-life movement should be blamed for these devastating attacks?

ARREOLA: Well, thanks for having me on. I think that we can just look at the decades of violence against Planned Parenthood and other health clinics that provide abortions and reproductive services to see that the hateful rhetoric does invoke such feelings from anti-abortion opponents that they do, some do turn to violence. Whether it is as dramatic as it was last week, and as tragic, in terms of a shooting. But also acid spills, bombings. Eric Rudolph, who bombed the 1996 Olympics did it in the name of anti-abortion politics. He also bombed a clinic that injured a nurse, as well as killed a police officer. And we have seen fires, we have seen people breaking in and destroying equipment. We have seen locks being glued. We have seen online threats to providers and doctors by having their faces show up on wanted posters.

So the violence spans from threats to actual murder. And I think we can, we definitely believe that the rhetoric fuels people who are willing to take those sorts of actions.

BALL: It also seems like much of the conversation surrounding this sad event is being centered on gun control and mental health illness. From one example, Obama’s statement about this tragedy, talking about gun violence–did address gun violence, but did not address gendered violence. Can you speak about why you think that is, and how we need to be shifting the conversation?

ARREOLA: I think it’s a, it’s a–we’re in a difficult conversation at the moment, talking about gun violence as well as our own safety in terms of terrorism, and trying to take those conversations and focusing them on the gendered violence against women’s health providers is difficult for some people because of the politics that are involved, that are especially involved when talking about Planned Parenthood. Thinking about Carly Fiorina’s comments, most people actually do support Planned Parenthood, do support birth control.

A majority, most women in this country will end up having an abortion at some time in their life. Most of them will not talk about it. There are stories and stories of people who work in women’s health clinics who see the protesters go from the front lines of their protest to the exam table. And then right back, because they want to deny what they are willing to do for themselves to other women.

BALL: If we could quickly fold in two questions I’d like to raise very quickly, here. One is for you to clarify exactly what Planned Parenthood does, because I think a lot of the conversation ignores all that Planned Parenthood is involved in, in terms of its work. But also as we look at the way these issues are framed and the language used and the labeling used, if you could say a word or two about what you think, or if you think it’s important, the way Planned Parenthood has defined this as domestic terrorism, as attacks like this as domestic terrorism.

BALL: And the importance is, you may see it, of this phrasing or this description of these attacks as domestic terrorism, as so labeled by the spokespeople from Planned Parenthood, what do you think of the importance of that?

BALL: Veronica Arreola, thank you for joining us here at the Real News Network.

BALL: And thank you for joining us here at the Real News as well. And for all involved, again, I’m Jared Ball saying, as Fred Hampton used to say, to you we say peace if you’re willing to fight for it. So peace, everybody, and we’ll catch you in the whirlwind.