US Occupying Oil-Rich Areas in North Syria to Choke Damascus 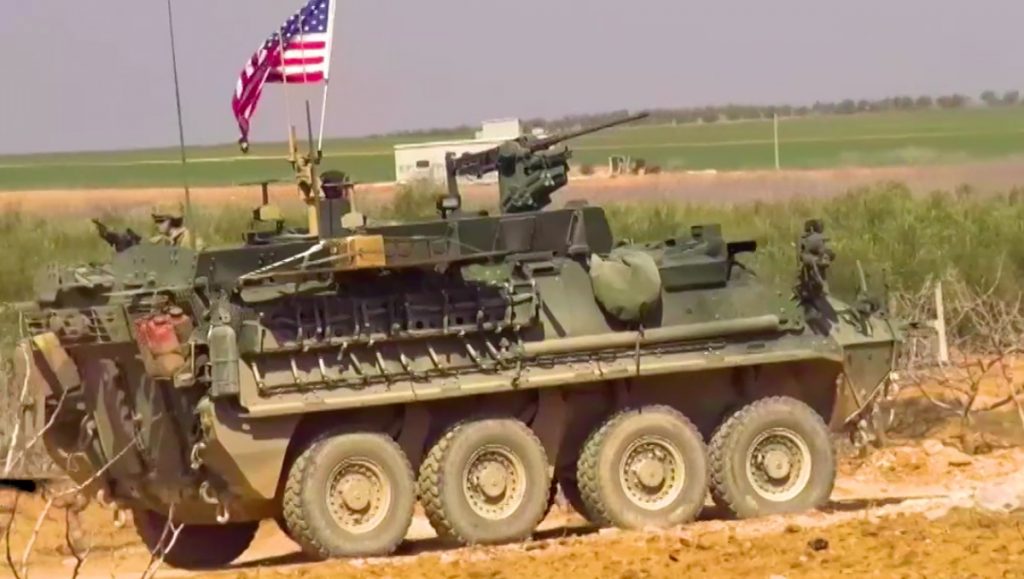 BEN NORTON: It’s the Real News. I’m Ben Norton. This is Part 2 of my interview with Ali Ornek. Ali Ornek is a Turkish journalist of Kurdish origin who previously worked for the leading Turkish newspaper Hurriyet Daily. He has extensively reported on the war in Syria, and in Part 1 of this interview we discussed the Turkish invasion of northern Syria and Ankara’s takeover of Kurdish majority cities.

I want to talk about the U.S. role in this. And in fact, you just mentioned something that’s, that’s very interesting. A prominent Washington Post columnist recently published an article arguing against Trump’s claim that Trump wants to withdraw the 2000 U.S. military forces in Syria. It’s unlikely that will happen. But a Washington Post columnist argued that the U.S. should stay. And one of the reasons he gave is because the U.S. controls many of the oil-rich regions in northern Syria. And he just openly spelled this out. He said, Trump, you know, you should stay to take, you know, seize this oil. And what’s funny is the Washington Post column cited Israeli intelligence officials, members of neo conservative think tanks here in Washington DC, and even members of the Syrian opposition.

So that’s clearly something on the U.S. mind. But I’m also interested in your thoughts on, like you said, the YPG’s relationship to the United States. Initially the YPG allied, or maybe allied’s the wrong word, but accepted support from the U.S. in order to fight ISIS. ISIS at this point has largely been militarily defeated and there are still at least 10 U.S. military bases in northern Syria. We saw that the YPG, or at least elements of it, rebranded to an extent, and allied with other Arab forces and forces from other ethnic groups to create the Syrian Democratic Forces, SDF, which controlled parts of northern Syria. However, so there’s no, there’s no question that the YPG/SDF has closely allied with the U.S. in some of these battles. However, we also saw in Afrin that the YPG asked the government in Damascus for assistance, and asked the Syrian army, and the Syrian government did send national democratic forces, Syrian government allied forces, to Afrin to fight Turkey in alliance with the YPG. So do you think that it’s fair to say that the YPG has thrown all of its cards in with the U.S., or is it trying to play this kind of neutral role and it’s trying to maintain alliances not just with the U.S., but also with Syria and Russia?

ALI ORNEK: The official, official explanation of YPG is that they are fighting ISIS like an arch enemy, and in order to defeat it they asked U.S. military support. But this is actually, I don’t think that this is true. What Trump is currently carrying out in Syria as a plan, actually, this is not his plan. This is Obama’s plan. When Obama refused to bomb Syria directly, a direct intervention in 2013, the U.S. government went in and carried out a different plan. It’s called defeating and degrading ISIS, but actually it’s occupying Syrian territory on the pretext of defeating ISIS.

So what does this plan basically offers, to grab the Syrian most valuable resources. Syria now needs 30 billion dollars for its cost of reconstruction. Its cities are destroyed. And its whole transportation and energy systems were collapsed. So what the Syrian government is now looking for is the oil resources and the gas resources of eastern Syria to finance this reconstruction. But when the United States ex-Secretary of State Larson said, he said we have a card now in Syria by capturing these oil fields. There is, I don’t think that this is, this is not crystal clear anymore. This is very, they openly said this, both Larson and also Mattis, said that they are trying to choke Syria economically, and to root for regime change. And YPG was part of this plan, and still is part of this plan. And when we are talking about U.S. plans that are not focusing on defeating ISIS, we can’t say that the YPG and U.S. relation is basically some sort of necessary military cooperation, or coordination, or something else. This is not true. When we are looking in 2012, when YPG all of a sudden in northern Syria, they claim that territory which is called Rojava. They said this is the land of Kurds which needs to be as autonomous or independent much.

Now, the areas that are under control of the YPG isn’t, isn’t that Rojava. It’s bigger than it. They have southern , which is which has never been a historical Kurdish land. And also they have Raqqa, which is, which has always been an Arab city. And they have many other things, like Tal Afar. Also Manbij. So they are out of the actual plan, and I think the legitimate plan. They are now acting as a proxy force for the United States on ground. And we saw this even in Afrin. You know, closely followed the war in the Afrin front for over, the first month the Turkish armed force couldn’t advance deep into the Afrin region. And each time the PKK or the YPG carried out huge counterattacks. But right after then moves it to Ankara. Something had changed, and Turkish armed forces advanced into Afrin very quickly. And they saw no huge counterattacks. And also the capture of the center of Afrin was really weird. You know, it was urban warfare, and in Syria urban warfare is very hard, and took many times and life. But in Afrin we didn’t see YPG forces all of a sudden. We drove from the city, and right back to Manbij. This is, I think this, there’s some sort of diplomatic deal with this withdrawal. It’s not normal.

What I’m trying to say is that the next visit Turkey, they think U.S.-Turkey relations is on stake, and they, I think United States advise YPG to withdraw its forces from Afrin, sacrifice it for to protect the actual core territory in the east.

BEN NORTON: The PKK during the Cold War was identified with Marxism-Leninism, it was a kind of more traditional communist movement. After the collapse of the Soviet Union and the end of the Cold War, the PKK move toward, and especially since the 2000s, move toward this kind of anarchist style Democratic municipalism, democratic confederalism. You know, cited by figures like Murray Bookchin, Ocalan, who’s now imprisoned in life by Turkey. There are also reports that the CIA was involved in his ultimate imprisonment. So again, we see a history of the U.S. betraying this movement, even though it appears in some ways to be allied with it today. However, when the PKK was you know identified with the Marxist-Leninist tradition it was fighting for an independent state, an independent Kurdistan. Today the position of the PYD, the political wing of the YPG, is that it wants to create an autonomous region that is not independent of the Syrian state. So why do you think that that this is going on in northern Syria, that everything you’ve been discussing is going on when the YPG says that it doesn’t actually seek to create an independent Kurdistan? What are the contradictions there, and is it a matter of different elements within the YPG leadership disagreeing over this political question? Are there elements in the YPG leadership who, you know, who maybe, who led the SDF, who are more closely allied with the U.S. and support an independent Kurdistan? And are there also competing tendencies within the, within the YPG who do not support the U.S. and who do not support creating an independent state?

ALI ORNEK: Yeah, actually I think YPG is suffering of some sort of identity problem. Although Kurds in northern Syria and in Turkey are the same, they’re people of the same nation, but they are, they change sociologically and historically, and economically also. And for, after being isolated from each other for over a century. And this is, that’s why also the YPG suffers an identity problem. Because it’s a, it tries to be Syrian while its leadership are actually Turkish. So they don’t, nobody needs to hide this relation. YPG is under the control of candy not of Iraq. All the other tales that we as U.S. government or some one else say like they are different organizations or they are not. But what PKK tries to do is they want to be ally of the United States. Not just for Syria. This is why Turkey perceive it as a very big threat. This is not a new phenomenon. In 2003 when United States invaded Iraq the PKK very radically changed its [inaudible] and start to, even they called invasion of Iraq as some sort of democratic invasion. Which is invasion, and it will, but also necessary for Iraq to be a democratic country. They said this. So they start to seek a ground to be allied with the United States. But the United States has always refused PKK to be allied. So things will change when Obama carried out the new plan. It’s called, as I said, defeating and degrading ISIS. They thought, they told YPG could be a really well proxy force for his plan.

So things have changed. And when United States policy for regime change collapsed, they now, they change their plans and found PKK is a proxy for this plan. And that this is, what I’m trying to say is, what PKK is, only thing, PKK, the important thing for PKK is having an autonomous state. I think they can guarantee it long ago. And they, I don’t think that Russia would have strongly opposed some sort of autonomous region. Actually, based on what I have learned so far is that actually Russia offered PKK some sort of autonomy, autonomous region, but they refused. Because being an ally with United States is now more important for PKK. And as, that’s why I’m telling, I said the defeat in Afrin was not a military defeat. It’s actually a diplomatic defeat. They were asked by the United States to withdraw their forces. So this is showing how much the PKK leadership pay importance to their relationship with the United States.

And as I said, this is not a new phenomenon. This is for over 15 years PKK was looking for this.

Ali Ornek is a Turkish journalist of Kurdish origin. He was previously a foreign news editor for Hurriyet Daily. He has spent several years reporting on the war in Syria.