US Justice for British Citizens? 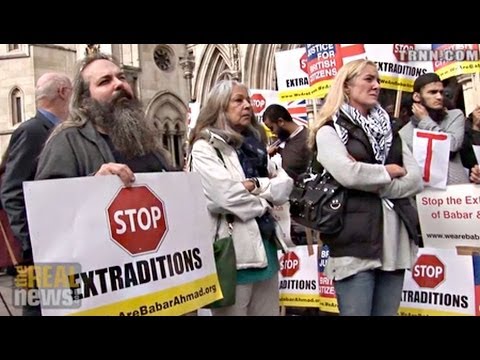 â€œIâ€™m overwhelmed, incredibly happy. I want to say â€˜thankyou Theresa Mayâ€™ because it was an incredibly brave decision, to stand up to another nation as strong and powerful as America is rare.â€

For some time Britainâ€™s extradition treaty with the US has been the source of controversy in the UK. Human rights groups and a number of politicians across the political spectrum have called for major changes that protect the rights of British citizens.

â€œIt really comes down to the Extradition Act, which was of course brought in in the wake of 9/11, and rushed through. And in the process a lot of the discretionary safeguards we had in place for British judges deciding when an extradition order could be made, they were got rid of in that act. One of the key concerns we have about that is the different standards in terms of who is extradited and when. So of course thereâ€™s a higher standard for the UK requesting someone to be extradited from the US, and in the UK the extradition act has done away with the prima facie requirement â€“ which is that a basic case is made out in a UK court before someone is extradited and parcelled off across the world to face a foreign justice system.â€

And now the British government has decided to block the extradition of one citizen, Gary McKinnon, who the US government wants to put on trial for what it describes as â€˜the biggest military computer hack of all timeâ€™ in 2002, which shut down the US militaryâ€™s Washington computer network, and paralysed munitions supply deliveries to the US Navyâ€™s pacific fleet.

"After careful consideration of all the relevant material I have concluded that Mr McKinnon’s extradition would give rise to such a high risk of him ending his life that a decision to extradite would be incompatible with Mr McKinnon’s human rights. I have therefore withdrawn the extradition order against Mr McKinnon.â€

The UK home secretary took the decision on the basis of Gary McKinnonâ€™s diagnosis of Aspergers syndrome and depressive illness.

But in sharp contrast, just two weeks earlier, she welcomed the extradition of another British citizen with the same diagnosis. Earlier this year, a psychiatrist warned that Talha Ahsan would face a high risk of suicide if extradited and placed in solitary confinement for a long period, as is expected.

â€œCan the Home Secretary say why, if she accepts the law does need to change, why she then sanctioned the extraditions of Babar Ahmad and Talha Ahsan. Surely they should also be benefiting from a fair extradition process. They were extradited on the 5th of October, they are still waiting for a year at least before theyâ€™re even going to come to trial. British citizens accused of committing crimes here in Britain â€“ they should be tried here in Britain, not in the US.â€

The extradition of would-be librarian Talha Ahsan, and his co-defendant computer expert Babar Ahmad, has aroused controversy in the UK, given that both men are accused of crimes allegedly committed in Britain. Prior to their extradition they were held without charge or trial, for 6 years in the case of Talha Ahsan, and 8 years in the case of Babar Ahmad, the longest term any British citizen has served without trial in the UK in modern history.

The allegations against them centre around this website, Azzam.com, which was taken down in 2002. It contained articles on the conflicts in Chechnya and Bosnia, and later Afghanistan. US prosecutors argue the site and the men acted as a recruitment and fundraising base for Jihad, although the two deny this.

â€œAs is the nature of the internet and websites, the data was held on multiple servers spread across the world, including here in the UK and in various Asian countries. For a brief period of a few a months one of those servers was based in Conneticut, and itâ€™s on that basis that US prosecutors have filed charges in an American court, and the extraditions have taken place.â€

The US government also alleges that classified details of the movements of its fifth fleet, and the ships’ vulnerabilities to RPG attack, were sent to the website and held by the men.

Babar Ahmad was severely beaten by police during his initial arrest in London in 2003. They later admitted in court that theyâ€™d subjected him to grave abuse tantamount to torture. Despite this experience, both he and Talha Ahsan argue they should have faced trial here in the UK, where most of the evidence was gathered, and where their crimes allegedly took place.

â€œAll these things could have been dealt with six years ago, or eight years ago in Babarâ€™s case, and put in a British court of law. As a matter of fairness, logic and common sense, it should have been put in a British court of law. When we go home and look at our google, our hotmail, our twitter â€“ these are all on US servers. Most .com and .net things are on US servers. Most emails in the world pass through a US server. So if a US server is enough to claim extra-territorial jurisdiction, then the United States effectively has extra-territorial jurisdiction over the entire world. If theyâ€™ve done anything wrong, try them in the UK, show some evidence.â€

But that was made impossible as British prosecutors werenâ€™t even allowed to see most of the evidence, and what they were shown didnâ€™t amount to a case, because Londonâ€™s metropolitan police bypassed them and handed over the entire file to US authorities.

Further muddying the waters, and polarising public opinion, both the government and the corporate media have repeatedly confused the cases of Babar Ahmad and Talha Ahsan with other suspects who stand accused of more serious crimes. Some newspapers have championed the cases of Gary McKinnon and university student Richard Oâ€™Dwyer, who the US authorities also want to extradite over allegations of providing links to copyrighted content, while at the same time the newspapers have described the two Muslim men from south London as â€˜unwanted guestsâ€™.

The contrast has led many within Britainâ€™s Muslim community to feel that, in eyes of the establishment and media, some British citizens are more equal than others.

â€œThe Muslim community have been accused of terrorist offences, prior to that we had the Irish community, so other communities have been through this before. Japanese Americans were interned in the United States, many of the Black Panther movement were falsely framed and jailed for decades. So itâ€™s happened to other communities before. And at present, with the horrors of 9/11 and 7/7, which my brother would fully condemn, we should always remember that sometimes prosecutors can get things wrong. Sometimes intelligence can be bad.â€

Babar Ahmad and Talha Ahsan have both pleaded not-guilty in front of a US judge in Connecticut, and are coming to terms with a judicial and prison system in many ways alien to Britain. If convicted, or if they enter into a plea-bargain, theyâ€™re likely to face solitary confinement in a supermax prison for years on end.

Moazzam Begg, a former Guantanamo Bay detainee who was released without charge from US custody after nearly three years imprisonment, fears for their mental well being.

â€œThey will now be sent and held in solitary confinement for the foreseeable future, in places that have been regarded and described by the UN special Rapporteur on torture as torture, because of 23 hours of solitary confinement. I would have dreaded to have been sent to a US prison, and I dread what theyâ€™re going to do now with them. And thatâ€™s despite knowing that their ordeal has come to an end here, but itâ€™s about to begin there.â€

Supporters of the two men also fear they may be pressured into accepting a plea-bargain. David Birmingham, one of the Natwest 3, has been through the extradition process. He says he was forced into pleading guilty, and having served his sentence, has now recanted his guilty-plea.

David Birmingham, Extradited as one of the â€˜Natwest Threeâ€™

â€œTheyâ€™ve never been anywhere near America. They may or may not be bad men. I have visted Babar Ahmad in prison on more than one occasion. I used to be in the army, I have no truck with terrorists, and I have told him that. And if he is tried by a jury of his peers in this country and found guilty of terrorist offences, I will be the first to throw away the key. But he deserves a fair trial, and he deserves a trial where he is able to present a defence to those allegations. And if he sent to the United States of America, he ainâ€™t getting it.â€

Babar Ahmad maintains that he supports the concept of extradition, but only for fugitives from justice. He claims that heâ€™s won the moral victory by exposing what he calls the fallacy of the UKâ€™s extradition arrangements.

And while Talhan Ahsan is in pre-trial detention in the US, his presence is still being felt in London, where his award winning poetry is currently on display in the capitalâ€™s SouthBank arts centre, within sight of Parliament.

The cry of the joint campaign run by the families of Gary McKinnon, Talha Ahsan, Babar Ahmad, and Richard Oâ€™Dwyer, has been British justice for British citizens, when the crime has allegedly been committed in Britain. The government says itâ€™s changing the law so that can happen in the future. But it comes just two weeks too late, perhaps deliberately so, for the two Muslim men from South London.