UK Local Elections: A Stalemate for Labour and Conservatives

The Labour Party does very well in London, better than they have in 50 years, and yet no major gains against the Tories, we speak to Jon Lansman of Momentum to analyze the results

The Labour Party does very well in London, better than they have in 50 years, and yet no major gains against the Tories, we speak to Jon Lansman of Momentum to analyze the results 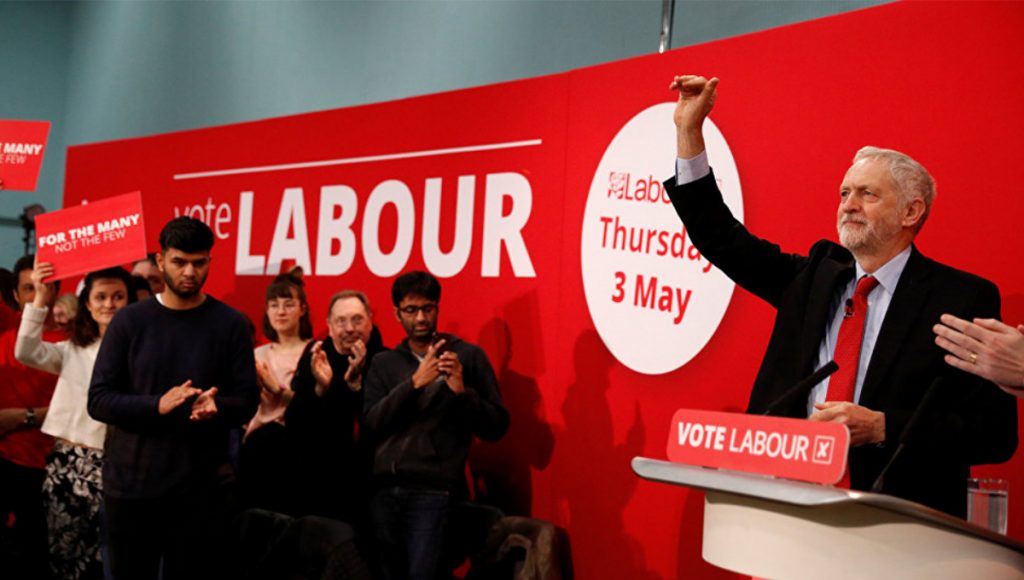 Now, why are these local elections even significant? Let’s find out. On to talk about the results and their significance is Jon Lansman. Jon is a British Labour Party activist. He is the founder of the movement Momentum, the organization within the Labour party that supported Jeremy Corbyn, which is very similar to Our Revolution within the Democratic Party here in the U.S. He was active on the left side of the Labour Party since the 1980s, and he’s been good enough to join us today after staying up most of the night last night. Thanks for joining us, Jon.

SHARMINI PERIES: All right, Jon, tell us about why these local elections are even significant. Why is it important for us to know about them, and what does it indicate?

JON LANSMAN: What we’ve got here is a picture which shows that, you know, Jeremy, we’ve achieved, for example in London, in terms of the number of Labour councillors elected, the best result we’ve had since 1971 with Jeremy as leader. So that is a significant indicator that Jeremy is a Labour Party leader that can win with a bold, radical, transformative program for government.

SHARMINI PERIES: Now, Jon, you’ve been a critical player in the formation of the movement called Momentum, and you’re really a grassroots organizer in that sense, because it is Momentum that put Jeremy Corbyn in the position he is now, which is a position as leader of the Labour Party that is highly contested by the establishment of the Labour Party, as we have known for decades. Yet because of Momentum he brings a fresh look at the issues that the country is facing there. There’s a great deal of young people that have joined the party as a result of Momentum. There is a drive behind Corbyn similar to that of Bernie Sanders here. Give us a sense of how the base is feeling at this moment as a result of these elections.

JON LANSMAN: Well, I think they, they came out in great numbers to campaign. You know, the, the the party has trebled in size since the election of Jeremy Corbyn. So we are now the biggest political party in Western Europe. You know, that is very significant. And for us that’s, you know, we’ve got 600000 members. And those people can have millions of conversations with voters, you know, in their communities, over the garden fence, with people in their workplace. So they are a real instrument for winning, for converting people, for persuading people.

You know, they are very enthusiastic about politics. And you know, in most of the years I’ve knocked on doors, as we do in Britain, in the run up to every election, it’s not the most, you know, we were normally there just simply gathering data on which way people intend to vote, so that come election day we knock on the door to get them to come out and vote. That’s how we operate in Britain. And now we have literally hundreds of thousands of people that we can mobilize to help us do those things, and to talk to their friends, and neighbors, and work colleagues as well.

And that’s what Momentum has become very good at. We do it for debates within the Labour Party, but we do it in public elections like this one. And we did very much better in these local elections than we did in the ones we had two years ago. That’s, you know, that’s what we were trying to do. We need to get better and better at mobilizing people to persuade people, because ultimately that’s the way we’re going to win. You know, I think people will be pleased with this. Obviously you always want to do better. However, you know, in London for example, to have the best result we’ve had in 50 years is clearly a remarkable result.

SHARMINI PERIES: All right, Jon. Give us a sense of what Jeremy Corbyn is thinking about these results. But before we do that, let’s have a clip of him celebrating the results. Here we go.

SHARMINI PERIES: All right, Jon, so that was obviously Jeremy Corbyn, looks like on the campaign trail, not really knowing the results at that point. But give us a sense of what the leadership is thinking.

JON LANSMAN: Yeah. Well, that was, that was a few hours ago, and quite a number of authorities hadn’t started counting at that point. I think it’s a very good basis for the challenges that we still have. But we do still have challenges. In the general election last year, we also won parliamentary constituencies we’ve never won before, but we did lose a few. And the few we lost were in post-industrial areas, areas where industry has disappeared because of, you know, global corporations moving production to the other side of the world because they can make more money that way. Global corporations that have really no concern for people or place or communities, they’re only concerned with the bottom line, with the profits they make, for a very few number of people who don’t pay much in the way of tax.

So there are people in those areas are already left behind by so-called economic progress, and haven’t seen any fruits. Although, actually, the entire British population has suffered somewhat, because average pay in real terms is lower than it was in Britain now than in 2010. But in these particular left behind areas, which I guess are similar to those depressed areas which, in which some people voted for Trump, we are having trouble winning them over. Those are the kinds of places where we lost one or two seats.

I think it’s going to take longer to win those people back because I think they want to actually see, you know, they want to see actions, not just words. But winning local authorities is one way of being able to demonstrate in action that we are on their side, and we can make a difference to their lives. Although of course what we really need to do is to get into government to be able to demonstrate that.

SHARMINI PERIES: All right. Now, one unique thing about Momentum, Jon, is that it has identified mobilization at local levels as one of its key priorities, working with these local councils. So this is also some sort of a vote or a poll on how well Momentum itself has been doing since its establishment. And when we listen to coverage for UK politics from abroad all we hear is about Brexit, Brexit, and Brexit. But, but we know there are very significant issues on the ground. The NHS, for example, health care, the issue of immigration, and so forth. Give us a sense of what people in Momentum was hearing on the ground as they were organizing this time around.

JON LANSMAN: Well, I think people are depressed about the state of public services. They are, you know, you raise health care. I mean, people, everybody in Britain greatly values the free health service that we have. The point of use. And unfortunately, underfunding, lack of investment means that the system is really creaking. People are having to wait very much longer for operations. And that is a real problem. There are problems with other services, too. So the social care of the elderly, which is a service in which local councils are involved, you know, they are suffering from serious underfunding.

But all aspects of public services are threatened by, you know, the policies of austerity that we’ve been facing for a number of years. And people see Jeremy Corbyn as the person who’s exposed austerity as, you know, something which is really a matter of choice, not necessity, and that there is an alternative. An alternative that can give people hope of new jobs, of growth, of a rising standard of living, of people being able to afford decent housing, which at the moment most people, actually right across social classes, in Britain cannot.

SHARMINI PERIES: All right. Now, if you’re on a firmer footing, as far as the Labour Party is concerned, as a result of these elections, you’ve gained some ground. What are the next steps? Where will you be setting your targets next?

JON LANSMAN: Well, we’ve got to, in the party we have to develop our policies. You know , we made a great start with the manifesto that we fought the last general election on last year. But we need to broaden and deepen the policies that we need to transform Britain. We can’t go back in, you know, whenever the election comes, which could be soon or it could not be until 2022. We need to have, you know, we need to develop a program. So that’s important.

We need to over time turn the local councils that we run into councils that believe in the kinds of transformative policies that Jeremy Corbyn believes in. We haven’t yet had much impact on the complexion of the candidates that are standing for local councils. We want to do that in the future. So there are things that we need to do inside the party to improve the outlook of our elected representatives and candidates. We also need to campaign in communities and in workplaces on issues that make a difference to people. So you know, I expect to be campaigning on our housing crisis. I’ve no doubt there are similar crises in the U.S. But in London, for example, you know, even middle class parents who live in, who own house in London, very often their children have no hope of similar houses in the future, because the cost of housing has risen so dramatically. So whether they buy or rent, very often decent housing is outside, you know, it is simply beyond what they can afford. And we haven’t built any public sector housing and social housing for decades.

So most housing, all housing, effectively, is unaffordable to ordinary working class people, who therefore have to move a long way out of London in order to be able to finance, or find somewhere they can afford to live in. But then, of course, they have to pay the cost of travelling into London, which is very expensive.

SHARMINI PERIES: Now, Jon, I know there’s a number of initiatives that the Labour Party has undertaken under the leadership of Jeremy Corbyn. You referred to the manifesto. There’s also a democracy review going on. All of which we are hoping to take up with you next time we have you on, which I hope is rather soon. So for now I’ll let you go to sleep, and we look forward to having you back very soon, Jon. Thank you for joining us.