Had the British been presented with the option, people might choose a socialist Britain over a capitalist EU, but they are not given that choice, say Prof. Leo Panitch of York University and Jon Lansman of the British Labour Party's National Executive Committee

Had the British been presented with the option, people might choose a socialist Britain over a capitalist EU, but they are not given that choice, say Prof. Leo Panitch of York University and Jon Lansman of the British Labour Party's National Executive Committee 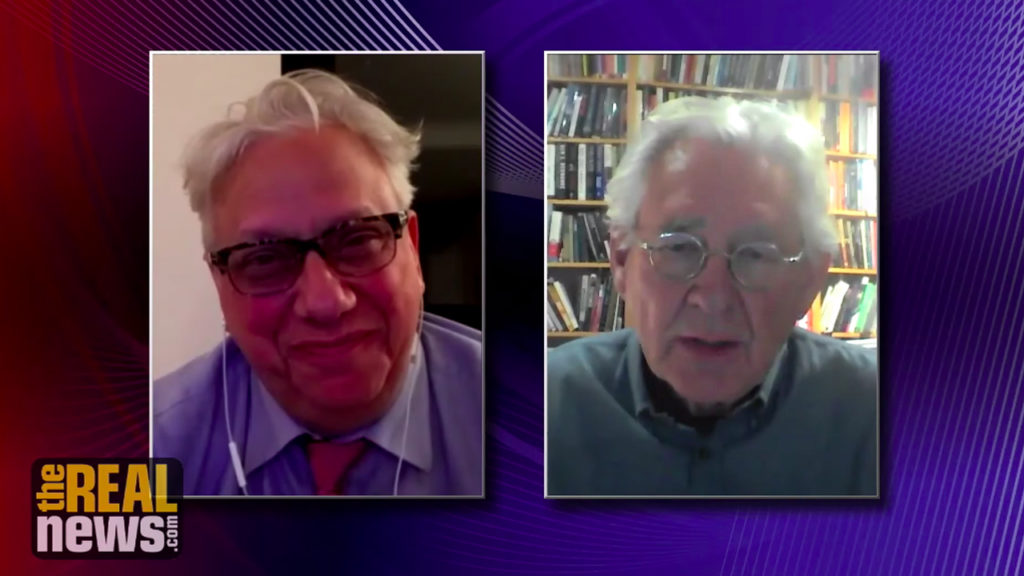 SHARMINI PERIES: Welcome back to my conversation with Leo Panitch and Jon Lansman. Leo is a Senior Scholar and Professor Emeritus of Political Science at York University in Toronto and he’s also the author of the book The End of Parliamentary Socialism: From New Left to New Labour. And Jon Lansman is the founder of Momentum, an organization within the Labour Party that supports the leadership of Jeremy Corbyn, and he’s also a member of the Labour Party’s National Committee. Thank you both for joining me again.

SHARMINI PERIES: All right, Jon. With no deal in place now as a result of this vote, there’s a very real possibility a so-called no deal Brexit could happen on the 29th. This means that the UK would leave the EU with no transition agreement in place. Now, such a process could cause serious damage and perhaps displacement to the British economy because of the interconnectedness with the EU. So do you believe that that will be the effect of not having a deal at all?

JON LANSMAN: Well, I think that would be the effect of not having a deal at all. But I think the chances are actually not that high of not having a deal at all at the moment. I think there is a majority in parliament, a significant majority in parliament, against leaving the EU without any deal. And I think it is likely, therefore, that that will be avoided. That is a threat, however, and it’s a threat which May has been using, but unsuccessfully, in order to try and get conservative MPs to vote for a deal. I think I would place a rather different emphasis than Leo did.

So I think that for the time being, at least for the next few days, perhaps weeks, I think the high level of unity, perhaps surprising level of unity that was shown on the EU at our conference in the end of September, will be preserved for a bit longer. I don’t think that we’ll have the debate tomorrow on the confidence motion, I think there may well be other tactical moves. I think that the Tories have got us into this mess. They’ve spent three years fluffing around, focusing entirely on Brexit without actually making any progress towards it. We would rather see they take responsibility for this, for the state they’ve got in than for us to force a general election.

SHARMINI PERIES: All right, Leo. I’m going to let you respond to Jon here. But let me preface that by asking you that two and a half years ago, citizens of the UK voted in favor of leaving the EU with 52 percent of the vote in favor of leaving. Yet this last two and a half years, much debate has taken place. The consciousness of the UK public is much more keen, people are much more aware of the issues, the consequences and so forth. So two things. One is, respond to what Jon was just saying about a second referendum, and do you think that there would be a change in the outcome of such a referendum?

LEO PANITCH: I think there might be. I think there’s a danger, of course, now using the democratic pretext of having had one referendum. I mean, all kinds of other countries, including Ireland, have referendums then have them again until they get the right vote. There have been many referendums on the European Union that have been ignored, including those in France and Holland, which rejected the European Constitution, which implied much more than just the Constitution. That said, I think it is dangerous that the right will appeal to democracy, but really appeal to xenophobia and be able to win over people, including working-class people, with such a terrible appeal. I think that’s to be feared. I hope it won’t happen.

I’d much prefer that, as Jon says, those who still would oppose putting a priority on the EU would put a priority because they want to see a Labour government and they want to see a socialist Labour government. I don’t know what the outcome will be. I don’t think people are all that much more informed. I think there’s been a tremendous amount of scaremongering about what a Brexit will mean. It wouldn’t have to change that much, in fact, depending on what was negotiated. And I do think that a Jeremy Corbyn-led negotiation would be a far more progressive one. And insofar as it offered more on the movement of people than the Tories are prepared to offer, things might be won from that.

All of that said, I am somewhat dismayed that the socialist case has not been put forward nearly enough. Corbyn himself has spoken in terms of the issue being class divisions in Britain. He’s done so recently in a number of speeches that have been good. But in order to overcome the terrible neoliberal capitalist austerity that the British working classes have faced, one really needs to be making the socialist case, and that has not been made. It has not been made partly because of the divisions that we both were talking about in the Parliamentary Labour Party. I do think one is going to have to look at this in terms of socialist strategy.

And as I was saying, in that sense, one needs to look at the EU in relation to what is the barrier to that in the EU. Should there be another vote, and if that is forced, the Labour Party will have to be on the side, I would think, of staying in. But you’d want to make the case for staying in in a way that would indicate that one would not be accepting the restrictions on a socialist strategy, which are much greater in terms, as I say, of the opposition of the City of London and indeed from the American Empire.

SHARMINI PERIES: All right, Jon. Let me give you the last word and get you to comment on your response to some of the arguments being put forward by Costas Lapavitsas and others in the discussion, that the left really needs to consider a left Brexit. Your response to that.

JON LANSMAN: Well, look. I quite understand the attraction to Costas Lapavitsas of Greece being outside the EU. I don’t think the same would be true–I think that’s in any case controversial, and I think Britain is in a different position. Unfortunately, Greece has been trampled by Germany and other countries in the EU in the neoliberal interest, in the interest of preserving the current neoliberal structure of the EU. And I do think we’re in a bit of a different position, which is why, though I am in some senses a Eurosceptic–I think that the EU needs massive reform, which I think is Jon’s position too–I too campaigned for remain, and I would rather remain.

But the difficulty we have is this. Our supporters, if you include the people not just who voted for us in the last election but people who voted for us in previous elections, are very divided. It’s true that amongst our members, there’s overwhelming support for remain. It’s true that most Labour voters in the constituencies that we won support remain. But unfortunately, in the constituencies that we have to win in order to form a government, there are many potential Labour voters who voted for Brexit. And therein lies a dilemma for the Labour Party.

And our belief, it’s not purely electoral interest that we’re talking about, our belief is that the most important thing for the British working class is that we have a Labour government under Corbyn that pursues the transformative economic program that he and Jon McDonnell have been developing. And that would benefit Britain whether we ended up with some kind of soft Brexit rather better than the one that May has initiated, or continuing to be within the EU. It’s the economic program that matters most, not whether we are in or out of the EU, though certainly we would want to avoid a hard Brexit.

SHARMINI PERIES: All right. Leo, I see you nodding your head there, so let me give you a chance to respond.

LEO PANITCH: I entirely agree with what Jon just said. And I guess the question is whether, as people in the United States say, that workers who voted for Trump in the Midwest states would have voted for the kind of position that Sanders was laying out, even the nominee for the Democratic party, I guess the question is could you put forward a clear class perspective of a left-wing kind consistently without backbiting from your own supporters in parliament, whether you couldn’t win them over regardless of whether the issue was Brexit or not. That is, can you win over people who are open to xenophobic appeals by a progressive working-class appeal?

And I think there’s a fear, and Jon knows, of course, the situation far, far better than I do, that in the short term, one couldn’t win over those working-class voters in the marginal constituencies. And I understand that, and I do think that there are tactical considerations here that need to be taken very seriously, because it is very important that this leadership of the Labour Party be allowed to unveil a socialist project for Britain. It will be a sensible one, it will be a gradual one, but it will be one of structural change, of a I think entirely different kind than any previous governments in British history.

SHARMINI PERIES: All right. Leo, Jon, let’s leave it there for now. This is obviously going to be an ongoing discussion and I hope both of you join us again. Thank you so much.

LEO PANITCH: Good to be with you, Jon.

JON LANSMAN: And with you, Leo.