Food Security Off the Table 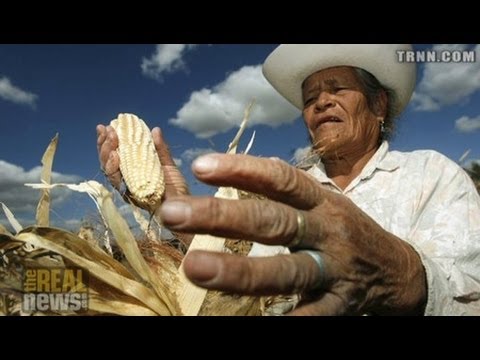 PAUL JAY, SENIOR EDITOR, TRNN: Welcome to The Real News. I’m Paul Jay in Washington. When the G-20 met in France a few weeks ago, one of the things they were expected to deal with was the issue of food security and the role of speculation in creating price bubbles. Well, not much was accomplished on this front, nor, most observers thought, on any other front by the G-20. Well, as we speak, the ministers of the WTO are meeting in Geneva, and they’re supposed to be directly dealing with the issue of food security. Well, what should we expect from those meetings? Now joining us to talk about all of this is Timothy Wise. He’s director of research and policy at the Global Development and Environment Institute at Tufts University in Boston. Thanks for joining us, Timothy.

JAY: So tell us what these meetings–what people hoped would be accomplished. And what are you expecting?

WISE: Well, I think the hopes are incredibly low for the World Trade Organization meetings right now. The Doha Round, which has been going on for ten years, is all but dead. It’s virtually been declared dead. The communique issued, the sort of pre-agreed declaration that’s already been developed in advance of the meetings acknowledges that there’s unlikely to be much progress, that there may be a need to look for alternatives to the Doha Round because it may not be completed. The expectations are tremendously low.

JAY: For viewers that have not been following this story, what was Doha supposed to solve?

WISE: Well, Doha was the development rounds. It was named that because the previous round of world trade talks was seen as inordinately favoring industrialized countries. And so developing countries insisted on a more ambitious development agenda that would put the needs of developing countries first. It stalled over a wide range of issues, not the least of them agricultural issues, with India and other countries insisting on key measures to protect food-producing sectors in their countries.

JAY: So talk, then, about what–the current state of things. Like, what is the real problem that needs to be addressed? And I guess then that will become clear, what policy’s not being developed. Let’s get to the underlying issues here. What is causing the food insecurity, mostly for developing countries, but not only developing countries?

WISE: Well, in part, the WTO should bear some responsibility for the food insecurity that we see. Up until 1980, least-developed countries actually ran a net food trade surplus–that is, they exported more food than they imported–until 1980. After 1980, that switched. And since the Doha Round began in 2001, the liberalization of agricultural trade has resulted in an enormous ballooning of the trade deficit for food for the least developed countries, those who can least afford to pay. It’s more than double what it was in 2001, the food import bill. And the FAO just recently estimated that the total food import bill in the world this year is going to be $1.3 trillion, an increase of some 20 percent over 2010, and that the countries hardest hit by that rising food import bill due to rising prices and rising volumes of imports are the so-called low-income food deficit countries, those who most need the food, and least developed countries, who are seeing an estimated 30 percent increase in their food import bills. So that’s one of the problems that definitely needs to be addressed.

JAY: Now, just as in several of our previous interviews we’ve talked about how NAFTA affected Mexico and how dumping of cheap agricultural–American agricultural products undercut the domestic production of food in Mexico, is it something similar in these other countries?

WISE: Absolutely. These were structural adjustment programs that mandated, you know, that the state reduce its involvement in the economy with the liberalization of trade in agricultural goods. So the removal of protections for domestic food producing sectors and [incompr.] the industrialized agricultural products from the global north and swamp out those markets. So that’s a direct–the rise in the–in food import bill in the global south is a direct result of some of these liberalization policies. And, unfortunately, that’s one of the ironies, really, about this current round of negotiations. No one expects anything really significant out of these meetings. But even modest measures that were proposed by low-income countries, by least-developed countries–.

JAY: What are examples of those measures?

WISE: There was a proposal to simply exempt humanitarian aid shipments from export restrictions, something that the G-20 had actually endorsed, and the WTO General Council, they couldn’t get agreement–enough agreement on it to even include it on the agenda.

JAY: So what’s the obstacle to reaching even minimal agreement if they’re so paralyzed?

WISE: Well, there are so many obstacles that we’ve seen. In effect it’s the same obstacle, I would say, that we’re seeing in most multilateral negotiations now, which is the most powerful countries are now seated at the table with some emerging economies, and they want to exact concessions from those emerging economies for their companies’ benefit. And emerging economies, like Brazil, like China, like India, are not so willing to grant these. They’re newly industrializing. They don’t feel like they’ve benefited from the trade rules and other international rules so much up to now, and the concessions are seen as kind of late demands in a process that, remember, was supposed to bring about development.

JAY: Now, apart from the trade imbalances, there’s another issue, which is the real underlying cause of some of these food bubbles. Is anything being done about this? Which has to do with speculation, and I guess the other big component is biofuels. But there was supposed to be some kind of controls on speculation. And we know some of these big commodity traders that are starting to own so much of the world’s food supply, not only do they own it, but they also hedge it and speculate on it after they own it. So is anything being developed on this front?

WISE: No, and that’s the–I think there have been modest–very modest efforts to control some of those things through legislation, right, the Dodd-Frank law and the weak implementation of it, reforms in Europe. The G-20 actions on this were particularly disappointing, because the French president, Nicolas Sarkozy, had really taken on the food security agenda and made it central to the G-20’s [incompr.] That raised a lot of expectations that there was going to be some real action, some real movement on controlling volatility, on speculation, on biofuels policies, another key kind of recognized drivers of the price spikes that we’ve seen in the last four years. And by the time the G-20 met in Cannes in November, that agenda was basically gone. The food security barely made it onto their final communique. The steps that they took were incredibly modest, endorsing calls for market transparency measures, so that we might know better what the physical inventories are of different stocks of food in the world. That could be good. It might not work. And in any case, it doesn’t get at the underlying problems with speculation. There’s very clear evidence, a really important, interesting paper that showed really very persuasively that the cause of underlying price rises over a long period of time in food prices was the U.S. ethanol program in particular, that you could track the generalized rise in food prices, separate from the speculative bubbles, by that rise in the conversion of U.S. corn land to ethanol, and you could track the price spikes to speculation in very clear ways. And yet what has been done on speculation and biofuels convergence? Virtually nothing. Virtually nothing.

JAY: So if Americans are going to demand something of their government, those are the two issues they should be demanding something about, speculation and biofuels.

WISE: Those are really top-priority issues. They are top-priority issues. And they–and there is, I would say, on the biofuel expansion question, close to an international consensus [incompr.] this is a very important driver of high food prices. On the speculation question, there’s a lot more debate, but I think there’s still a very strong body of evidence to say that first you should do no harm, that speculation and regulation of that speculation would actually impose very few costs on society at large, only on the large traders who benefit from it. But failing to re-regulate would–runs the risk of huge costs for the population at large.

JAY: And to what extent is corn ethanol still subsidized by public money?

WISE: Oh, no, still highly. It’s still very highly subsidized, and there are still [incompr.] protections against ethanol from outside. So it’s still a–the truth is that removing those supports at this point with oil prices so high wouldn’t necessarily–isn’t likely to stop the conversion of land to ethanol, but it would probably slow it somewhat. And in any case, the larger question for food security issues is: are there measures that the international community should take that will proactively slow biofuel expansion? One that some have suggested is that there should be a way to trigger the shifting of use of, say, corn in the United States from ethanol production to food when food prices are high, so that there’s–in effect, the ethanol industry, corn for ethanol serves as kind of a reserve of corn for food. That really doesn’t get much of a hearing at this point among the powers that be.

WISE: Absolutely won’t happen by market forces. And the market–and that’s the scary thing about the–thinking about the food crisis, right? The food–what we call the food crisis was a food price crisis in 2007 and ’08, and that repeated itself in 2010 and ’11. And all of the ingredients are still in place for there to be further food price spikes like we saw before. And the prices at this point are so much higher than they were five years ago that the cost is already dramatic and devastating to those least able to afford it.

JAY: Yeah, I guess that’s the point. We’re talking about malnutrition and even starvation amongst millions of people. Thanks very much for joining us, Tim.

Timothy A. Wise is the director of the Land and Food Rights Program at the Small Planet Institute. He also directs the Policy Research Program at the Global Development and Environment Institute at Tufts University. He is the former executive director of Grassroots International, a Boston-based international aid organization. He holds a Masters in Public…