TV Ads Are Flooding the Airwaves in Maryland Governor’s Race

With less than a month before election day, we talk to Marc Steiner about what impact millions in TV ad spending could have on the Governor's race

With less than a month before election day, we talk to Marc Steiner about what impact millions in TV ad spending could have on the Governor's race 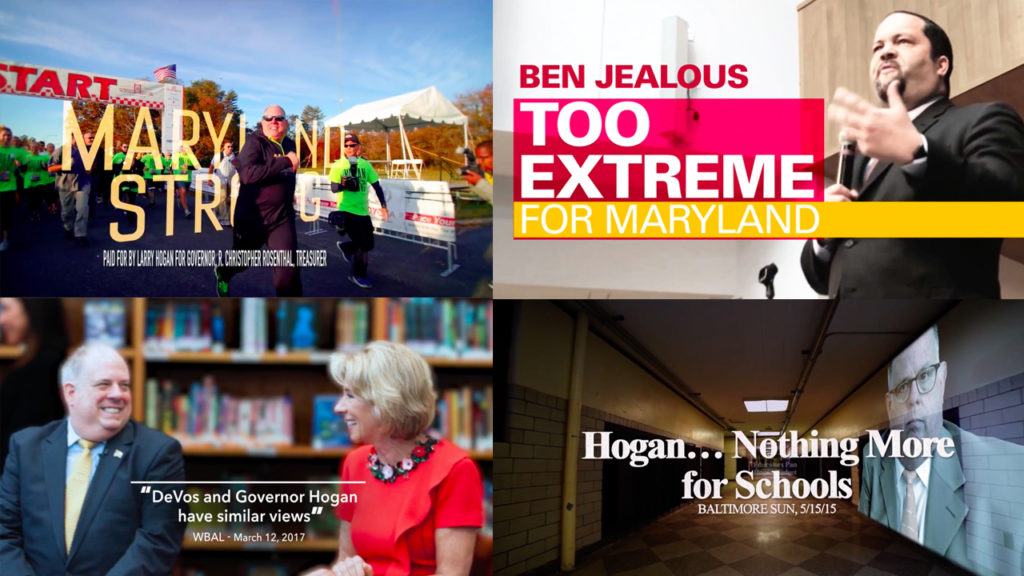 JAISAL NOOR: With less than a month remaining before the midterm elections, Maryland’s popular Republican Governor Larry Hogan has a 15 point lead in the polls, and raised ten times more money than his leading opponent.

But polls also show a majority of voters support the progressive policies backed by Democratic challenger Ben Jealous; single-payer healthcare, a $15 minimum wage, and legalizing marijuana. There’s a lot of reasons Hogan is doing well in the polls, even though voters support the policies backed by his opponent. Part of it can be attributed to the millions of dollars Hogan and his allies have spent on TV ads that have been airing for months.

JEALOUS CAMPAIGN AD: Ben has helped create over a thousand jobs. He understands the importance of entrepreneurs to the state economy.

JEALOUS CAMPAIGN AD: Our current governor has withheld money that could have been spent on education.

JEALOUS CAMPAIGN AD: Ben Jealous has a plan called Medicare for All that builds on the foundation of Medicare by using our collective purchasing power to lower costs, and the cost of prescription drugs.

BEN JEALOUS: Medicare for All allows us to take every pharmaceutical company to task on the price of every drug, and get a better deal for all of us.

JAISAL NOOR: These groups have given hundreds of thousands of dollars to Republican Larry Hogan; several times more than healthcare unions have given to Jealous, according to Rewire News. Meanwhile, pharmaceutical and healthcare companies have also given hundreds of thousands to the Republicans’ Governors’ Association to help air attack ads like this.

REPUBLICAN GOVERNORS ASSOCIATION AD: His radical and irresponsible proposals would destroy our economy.

JAISAL NOOR: The RGA has spent millions airing these ads. We asked the Democratic Governors Association if they were planning to respond, but they did not get back to us in time for this story. The Jealous campaign said it only spent $150,000 to air its ads in the first week, while the Hogan campaign has already spent millions blanketing the airwaves with ads like this.

JAISAL NOOR: This one touts the governor’s education record.

MARYLAND TOGETHER WE RISE: Passing the lockbox referendum ensures that continues for generations.

JAISAL NOOR: But critics say it’s misleading, because the lockbox was actually created and passed by Democrats.

An outside group comprised of unions is backing Jealous by spending a million dollars on ads like this one, focused on linking Larry Hogan to policies backed by billionaire education secretary Betsy DeVos and Donald Trump.

So unlike some other Trump policies, this one seems to be one that Governor Hogan can get on board with.

JAISAL NOOR: What’s gotten less attention is that Hogan did attempt DeVos-style reforms in Maryland, such as deregulating charter schools, which proved disastrous in Michigan, DeVos’ home state- something Hogan pushed back on in the only scheduled debate.

MARC STEINER: Larry Hogan has spent a ton more money than Jealous, because he has much more us to spend on ads. And some people think that that’s the reason why he’s ahead. I don’t think that’s the reason he is ahead. I mean, that’s what keeps you ahead and pushes your campaign in this mediated world of ours. But Larry Hogan began as one of the most popular governors in the history the state of Maryland. Not the most popular governor in our living history. For lots of complex reasons he’s the most popular.

So it doesn’t hurt that he’s ahead because of the ads. That helps him, gives him a boost, especially with his negative ads against Jealous. I think they can work. But I don’t think that’s the reason why he’s ahead.

The polls are interesting, when they show that the campaign platform of Ben Jealous is very popular. Those issues are popular with American voters. It doesn’t always translate into you are going to vote for that candidate, for a lot of reasons. A, that they may think that they believe in those things, but they don’t necessarily think they can happen. Or that person who believes those things can actually deliver on what he or she says they can deliver on. And I think that’s a big part of it.

And the other part is think about Maryland’s demographic. Maryland is 60 percent white. Now, the majority of that white population sees Larry Hogan as this grown up, white, middle-class businessman who knows how to get things done. Doesn’t offend people, knows how to cross the aisle. They see him as a moderate Republican. You can debate that all day long what that means. But that’s how they see it. And I think that’s- and people disliked Martin O’Malley so much that they’re relieved to have this man who they see as strong, and a tough leader, and is resolute, getting things done. And he also knows how to play politics, and has shown the state that he has done things, even when he hasn’t done them.

So I think, I think despite the fact that people want to see legalized marijuana, Medicare for All, that does not necessarily translate into votes for Jealous, unless Jealous knows how to get those votes out, which he may do. And we’ll see. Too little too late is not necessarily true in this case. I mean, in any case, really. It depends on what the push is about. If you look at how people view the elections of Stacey Abrams and Gillum in Florida, Andrew Gillum in Florida, neither one of them were given a chance to win those elections. And that’s because I think that our polling worlds and punditry worlds don’t always get how to take black candidates in situations where the constituency is not majority black. They don’t count a lot of things. They don’t know how to approach it. They often get it wrong. They got wrong in those two cases. They may be getting it wrong in terms of those two candidates’ ability to win. They may be getting it wrong in Ben Jealous’ case. They got it wrong in the primary.

HOGAN CAMPAIGN AD: Because Jealous is too extreme for Maryland.

Go ahead, call me a socialist.

Jealous would raise your taxes.

MARC STEINER: Even has Jealous physically- the shots he uses of Jealous make him look like some forboding man coming into Annapolis. So those things can be very effective, you know, when they’re coupled with, “I have put more money in education than any other governor.”

MARC STEINER: This is where ads come in. Ben Jealous has not been able to raise the money to have ads that counter Hogan’s arguments about what he’s really done. And he can be countered. A smart political strategist can take the words of Hogan and his actions, and show the exact opposite of what Hogan says he’s done. But unless you have the money to put those in ads or on billboards or something, you don’t get that message out. It’s much more difficult to get that message out. And you have to have again, as I said earlier, this ground game. Whether he has this ground game or not, I’m not convinced yet. He could have it. I just haven’t seen it. It doesn’t mean he doesn’t have it.