Protesters are met with new wave of police brutality, as thousands of lawyers join demonstrations

Protesters are met with new wave of police brutality, as thousands of lawyers join demonstrations 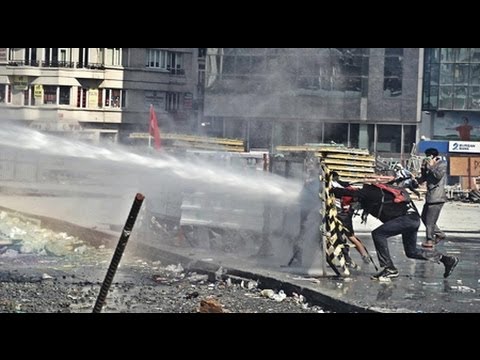 SHAGHAYEGH TAJVIDI, TRNN PRODUCER: On June 12, Prime Minister Erdogan ordered the Turkish interior minister to end ongoing demonstrations, as protesters prepared again to rally in Taksim. Erdogan, along with his daughter, also met on Wednesday with a few people identified as protesters, a group comprised mainly of artists and entertainers. Some protesters argued that Erdogan’s chosen activists were in fact friendly with the government and boycotted the meeting. Meanwhile, a spokesperson for the AKP announced that the meeting resulted in the possibility of holding a referendum over Istanbul development plans.

All of this unfolded on the same day that two Canadian journalists, Sasa Petricic and Derek Stoffel, were arrested and thousands of lawyers from bar associations around the country took to the streets, adding their voices to those of the 44 lawyers detained a day earlier. The lawyers made headlines in the first instance when they marched in response to a new round of attacks against protesters in Gezi Park and Taksim on June 11. Police claimed they were there to remove barricades and sides, while Istanbul’s governor, Huseyin Mutlu, declared twice on Twitter that Taksim will not be touched. What followed was a severe show of force, arguably the most severe over the last two weeks since the uprisings broke out.

Building up to the clashes was Erdogan’s speech upon his return from a four-day business trip in North Africa, throughout which he stated, these protests that are bordering on illegality must come to an end as of now, and they say I am the prime minister of only 50 percent. It’s not true. We have served the whole of the 76 million from the east to the west. Those who call themselves journalists, artists, politicians have in a very irresponsible way opened the way for hatred, discrimination, and provocation.

Erdogan’s statements propelled contrasting reactions. They mobilized his supporters, who chanted slogans such as those who raise their hands against the police should have their hands broken. His speech simultaneously pushed more demonstrators onto the streets, who in turn chanted Tayyip will pay and Tayyip, resign.

During the heavy hours of the recent crackdown, social media networks teemed with updates from within and outside Turkey, reporting police action and protesters’ responses. With a growing pool of online media and footage such as this that shows police attacking a protester in a wheelchair and prime minister Erdogan far from assuming a conciliatory tone, many are watching closely to see just what kind of an end the next 24 hours will produce.

For the The Real News Network, Shaghayegh Tajvidi.