Confederation of unions, stage two day strike in solidarity with protestors, against police brutality and for a more democratic Turkey

Confederation of unions, stage two day strike in solidarity with protestors, against police brutality and for a more democratic Turkey 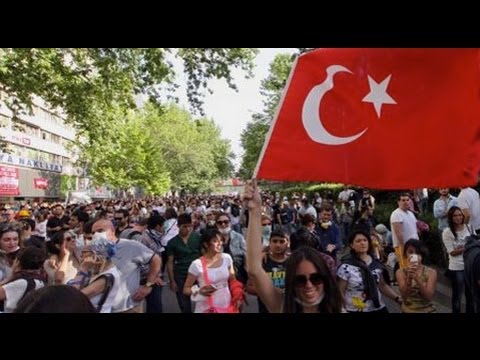 SHAGHAYEGH TAJVIDI, TRNN PRODUCER: For days the air in Istanbul has been replaced with tear gas, as state police continue to unleash chemical warfare from high and low.

Today the uprisings witnessed a new development, when Turkey’s Confederation of Public Workers Unions, KESK, consisting of 11 unions and approximately 240,000 members, declared their decision to stage a massive two-day strike. The action, which was originally planned for a later date in response to labor law modifications, was rescheduled to June 4 now, in response to the government’s excessive use of police brutality and its increasingly undemocratic practices.

Istanbul’s state of unrest began May 27 when bulldozers began to uproot trees in Taksim Gezi Park, situated in a historic downtown neighborhood in the heart of the city. The government’s plans to build a shopping center on the grounds of the park sparked outrage among the people, who immediately began to set up overnight tents and to plant trees in response to the demolition of one of Istanbul’s few remaining green spaces. So began what has been described as a war scene over the last few days.

But this protest has expanded into a resistance movement far beyond the modest protection of parks and trees.

LAWYER, ISTANBUL (SUBTITLED TRANSL.): I can say that we face a despot, disrespectful government that does not care about our ideas. They make a tool of religion and democracy. With these incidences we definitely saw that there is no democracy in this government. The press cannot talk. Whoever talks is put in jail. All our generals are in prison.

YASEMEN, PROTESTER: How can I say this? But have you seen how this whole protesting started? Did you see the pictures? People are reading books. They are just chilling at Taksim Park. And all of a sudden, around 5 a.m., they got attacked by police officers, and not in a–like, they didn’t even warn people, they didn’t even say, you have to leave now, otherwise we’re going to tear gas you. They start tear gassing first, and then high pressure water that has gas in it. Like, this is crucial.

LAWYER: As a lawyer I can say that there is no legitimacy in the behavior of police. They attack you without you provoking them. They use batons and excessive force, and the beating is so bad that you might lose limbs, organs, or even die. This is very dangerous.

TAJVIDI: The current protests have shed renewed light on the government of Turkish Prime Minister Recep Tayyip Erdogan. This repression which protesters experienced at the demonstrations was nowhere on mainstream media channels, whose programming consisted instead of the Miss Turkey Pageant and cooking shows.

To find their way to the demonstrations, protesters were left to their own devices, namely connecting through social media and relying on external media, all of this against the backdrop of heightened internet censorship and the frequent disabling of 3G in the Taksim area.

The Real News managed to briefly connect with an activist on the ground in Taksim, though the connection was barely visible.

TANYEL, PROTESTER IN TAKSIM (SUBTITLED TRANSL.): I want to underline that the Erdogan government and their police showed such an indiscriminate attack that the people were really in a vulnerable position. They [the police] threw gas bombs with no mercy, without distinguishing children or other vulnerable people. Right now there are hundreds of injured people in hospitals.

Turkish media tried to cover up the protests. There is no coverage on any of the Turkish television channels of the battle, which has been going on since last night. They all showed different, irrelevant programs.

But with the help of social media like Twitter and Facebook, folks gathered here in the square. Because of social media, this demonstration happened. They (social media) tried to show the demonstrations all around Turkey. It is more than protecting Gezi Park. It is now about battle of Erdogan’s government and Turkish youth. People want Tayyip and his government to resign from now on. This is a resistance now.

TAJVIDI: Despite coming into power with promises of economic prosperity and democratization ten years ago, and despite continued popular support, Erdogan’s Justice and Development Party, the AKP, also faces widespread discontent, and the reasons are not few. For one, Erdogan’s government is waging one of the harshest crackdowns on media in the world. In 2012, the Committee to Protect Journalists reported that Turkey was the leading imprisoner of journalists, ahead of both China and Iran.

Since 2009, the AKP Party launched the KCK investigations, the Kurdish Community’s Union investigations, throughout which the government targeted academics, journalists, and students under the guise of antiterrorism measures for any affiliations with the urban wing of the Kurdistan Workers Party, or PKK. Independent news sources from Istanbul have estimated the number of arrests as amounting to 3,000.

Just before the Gezi uprisings, the AKP drew strong criticisms by attempting to ban the sale of alcohol by the glass in public establishments. While they have not implemented the legislation, it was perceived as the latest threat posed by the government to secularism in Turkey. Erdogan’s religious conservatism, coupled with increasing authoritarianism and his intolerance of dissent, have culminated into present mass demonstrations across the country.

TAJVIDI: And many people have taken to the streets, now in 67 cities across the country. The diversity of those joining the uprisings has proven to be one of the most interesting aspects of the resistance, considering that Erdogan’s politics has had polarizing effects on an already divided Turkish society.

The Real News spoke with activists in Istanbul who commented on the complex makeup of the demonstrating crowds and their demands.

ALP, PROTESTER (SUBTITLED TRANSL.): The first participants of the demonstration were artists, various party supporters, members of associations, institutions, and unions. Then yesterday evening after 7 p.m. the movement became a public movement. Sharing material on social media is the reason for this outcome. I don’t think most of the participants are supporters of a specific political party, union, association. The group (of people) was composed of students, teachers, professors, doctors, lawyers.

YASEMEN: Yesterday I saw people who were actually supporting AKP, who actually voted AKP, they were protesting with me, next to me, head scarf people. This is something really important. Even, like, his people are supporting us now.

TAJVIDI: It is, of course, too soon to tell what is to come of the resistance and whether the struggle will reap benefits in 2014, the year of the first direct presidential elections in Turkey. With Erdogan’s ambitions to overhaul the political system now clouded by the events of the last few days, observers wonder whether Erdogan will begin to compromise and whether or not the current movement will pose any challenge to his support base.

KARAAGAC: What is clear now is that the government has seen that it will not be able to act with impunity from now on, without paying attention or sufficient attention to popular opposition. This has been the attitude by the government until now. But the people, or part of the people, has said this is enough.