How Much Will Methane From Thawing Permafrost Speed Up Global Warming?

Methane "seeps" on the tundra may be more problematic than previously thought, according to a new report co-authored by Torsten Sachs, a researcher at the GFZ German Research Centre for Geosciences in Germany

Methane "seeps" on the tundra may be more problematic than previously thought, according to a new report co-authored by Torsten Sachs, a researcher at the GFZ German Research Centre for Geosciences in Germany 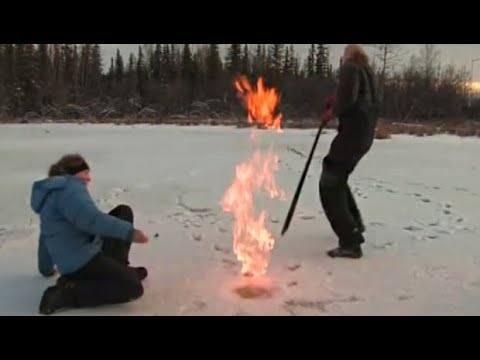 D. LASCARIS: This is Dimitri Lascaris for the Real News. Methane gas trapped under the Arctic tundra has been called the ticking time bomb of climate change. Due to its high propensity to trap heat in the atmosphere, methane’s global warming potential over a 20 year period is 86 times that of carbon dioxide, the greenhouse gas at the heart of most climate change discussion and analysis. So how concerned should we be about all the methane contained in the far north’s permafrost?

Because the Arctic is heating up at twice the rate of the rest of the globe, parts of the Arctic tundra are thawing. This may be allowing long buried pockets of methane to be released into the atmosphere, new research suggests. A study published in the journal Scientific Reports has concluded that, “Strong geologic methane emissions from discontinuous terrestrial permafrost in the Mackenzie Delta, Canada suggests that these methane seeps on the Tundra may be more problematic than previously thought.”

With us to discuss the study is one of its authors, Torsten Sachs. Torsten is a researcher at the GFZ German Research Center for Geosciences in Potsdam, Germany. He studies the exchange of carbon dioxide and methane between various ecosystems and the atmosphere, using stationary instrumentation on the ground as well as low-lying aircraft. Torsten joins us today from Potsdam, Germany. Thank you for joining us, Torsten.

TORSTEN SACHS: Thank you for having me.

D. LASCARIS: In general terms, Torsten, what do you regard as the most significant findings of this new study?

TORSTEN SACHS: The most significant finding is probably that we were able to pick up these geologic methane seeps with our aircraft measurements. We could actually see looking at such a large area that even though they occur on only a small fraction of the area, they could contribute up to 17% of the annual emissions. That’s a rough estimate, but still we saw that they play quite a significant role. They haven’t been looked at much before, maybe on an individual basis, but not on such a large scale.

D. LASCARIS: Could you talk to us a bit more about your methodology?

TORSTEN SACHS: What we are doing I would probably rather call in situ measurements. Remote sensing means you look at something from a distance. We’re measuring the methane right at the location of the aircraft, and then we infer what’s happening on the surface from those measurements at the aircraft, so what we’re using is a method that, in technical terms, is called micrometeorology or Edico variance and it relies on measuring very quickly, very accurately the wind vector in all three directions and also the gas concentrations. From their covariance we can deduce the amount of methane or carbon dioxide that moves vertically from the surface into the atmosphere or the other way around.

D. LASCARIS: Is this methodology that you’ve described, is it allowing us make more accurate, substantially more accurate assessments of the amount of methane seepage than prior studies have done?

TORSTEN SACHS: Well, what’s allowing us to be a bit more accurate is that we can actually cover a large area and not just an individual, small study site on the ground. The uncertainty that most of the previous studies carry with them is that the Arctic is huge. It’s difficult to access. We have very few data so we have to extrapolate from very small study sites to a very large area, and that causes errors. We can look at 10,000 square kilometers at once now and avoid certain location biases, so we can get a bit better overview over the entire large area. There are pros and cons to both scales, of course, but this is what we can contribute. We can look at the big picture, so to say.

D. LASCARIS: In looking at the big picture, can we say with reasonable confidence now at what rate the Arctic permafrost is thawing and at what rate it’s releasing methane into the atmosphere and, in particular, are we able to say whether or not the rate of thaw and the rate of seepage is accelerating?

TORSTEN SACHS: Well not from our study alone. So those are two things. First of all, the rate of thaw, there are observations of course from bore holes that are scattered across the entire Arctic. A lot of what we know or project into the future is based on complex mathematical models and those, to be honest, are still all over the place with their projections. There is a recent study now that took a different approach and they were saying that, if we limit the global warming to two degrees, we’re going to lose probably around 6 million square kilometers of permafrost towards the end of the century, and, if we limit it to one and a half degrees, we’re still going to lose 4.8 million square kilometers out of the 15 million in total.

D. LASCARIS: Are we able to say what the loss of that much permafrost area, what quantity of methane would be released into the atmosphere as a result of that loss?

TORSTEN SACHS: No, that’s equally uncertain still. We’re currently in the process where we try to bring the numbers from so-called bottom-up estimates. That means people go out into the field, do their measurements, and then scale it up to larger regions or the entire Arctic and the so-called top-down estimates based on satellite data or aircraft data to make those agree a bit more, because right now they are still not in very much agreement so it’s difficult to say even right now what the current condition is.

Then, to look into the future. That again relies on models those models can’t even get the thaw right and of course everything else down the chain is also still very uncertain. There are some estimates that say that all the permafrost carbon released, that’s not just methane also carbon dioxide, could contribute 0.3 degrees of warming by the end of the century but that again, that’s one model study out of many and there’s still a lot of work to be done on that front, too.

D. LASCARIS: So, as a layperson, what I’m hearing is that there’s a considerable amount of uncertainty in the scientific community surrounding the rate at which a thawing permafrost is releasing and will release methane into the atmosphere.

As I mentioned at the outset, this is a very potent greenhouse gas, much more potent over a 20 year period or so than CO2. The scientific community has established a carbon budget. Is it possible, for example, that our carbon budget is in fact much smaller than we have believed it to be up until now because it doesn’t adequately take into account the potential for methane release?

D. LASCARIS: Right. Now I understand that methane is released not only from the thawing permafrost but also in the microbiological process of the thawing tundra. Can you explain the distinction and which of these two is likely to be a greater source of methane leakage into the atmosphere?

TORSTEN SACHS: The greater source is definitely the microbial methane production on the surface because permafrost very often is essentially a wetland. So like in any wetland, even in temperate latitudes, as long as there is oxygen present and microbes can chew on organic material, that will produce methane, and that’s what’s happening in large expanses of the permafrost world. The thought is now there’s a lot of organic carbon contained in the permafrost and, if that thaws, the microbes have more to chew on and they’re going to produce more methane. On top of it, it gets warmer, which makes them happier. They can produce even more methane, so that’s what most of the studies focus on.

But in addition to that, there are large natural gas reservoirs in the Arctic, and most of them are probably deep enough but some of them are also kept in place because there is a lid of permafrost on top of them. If you take that lid away or punch holes into it, that could potentially allow methane to migrate to the surface along fjords or any kind of geologic structure and be released to atmosphere. That’s what we think we’ve seen in the part of the Mackenzie Delta that’s west of this sharp permafrost thickness boundary that we see in the Delta. The special feature of the Mackenzie Delta is that, east of a line that runs approximately around Middle Channel, the permafrost is about 600 meters thick and continuous and, west of it, it’s only about 100 meters thick and discontinuous, meaning there are already areas that are thawed and that’s where we see these strong methane emissions that we attribute to geologic seepage.

D. LASCARIS: Well, this has been Dimitri Lascaris of The Real News speaking to Torsten Sachs, a research scientist at the GFZ, German Research Center for Geo-sciences in Potsdam, Germany. Thank you very much for joining us today, Torsten.

D. LASCARIS: And this is Dimitri Lascaris for The Real News.

Torsten Sachs is a researcher at the GFZ German Research Centre for Geosciences in Potsdam, Germany, studying the exchange of carbon dioxide and methane between various ecosystems and the atmosphere using stationary instrumentation on the ground as well as low-flying aircraft.