Trump to Abandon up Key Nuclear Missile Treaty – What is Behind the Move?

Col. Lawrence Wilkerson says that the main reason for Trump to abandon the Intermediate-Range Nuclear Forces treaty has to do with interests in the administration that would like to see a restarting of the nuclear arms race

Col. Lawrence Wilkerson says that the main reason for Trump to abandon the Intermediate-Range Nuclear Forces treaty has to do with interests in the administration that would like to see a restarting of the nuclear arms race 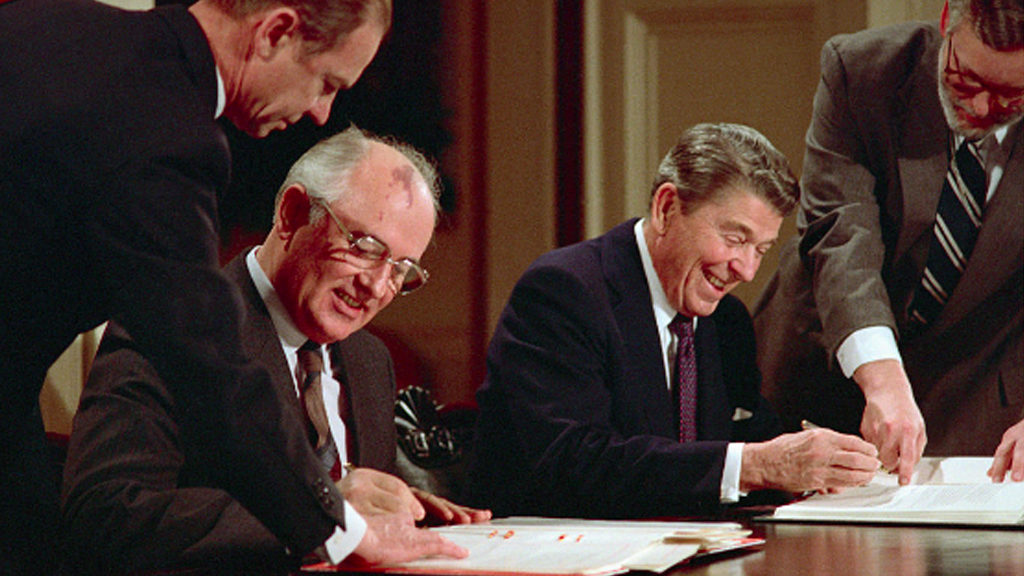 GREG WILPERT: The INF Treaty was signed by then-president Ronald Reagan and Soviet leader Mikhail Gorbachev in 1987. It required both countries to eliminate short-range and intermediate-range nuclear and conventional missiles. The Trump administration has long argued that the Russians are in violation of the IMF treaty when they deployed a new cruise missile system early last year. Governments around the world are reacting with dismay about the decision. Mikhail Gorbachev called the decision reckless, and not the work of a great mind.

Joining me now to discuss the INF treaty is Lawrence Wilkerson. He’s a retired U.S. Colonel and former chief of staff to Secretary of State Colin Powell. He’s now a distinguished professor at the College of William and Mary. Thanks for joining us again, Larry.

LARRY WILKERSON: Thanks for having me on.

The IMF treaty is not that well known by the general public, but it is a significant treaty because it led to the removal of thousands of intermediate-range nuclear missiles from Europe in the late 1980s. So let’s get our viewers and listeners up to speed. What was the IMF treaty about, and why did Reagan and Gorbachev sign it in 1987?

I think the real significance of this treaty, as Colin Powell used to say to me quite frequently- remember, he was the deputy national security advisor, and then national security advisor for [Reagan] in his last couple years- is that it was the first elimination of an entire class of nuclear weapons. And in this case, of course, of delivery means.

It was significant in that sense, that it started really genuine arms control, nuclear arms control process, that then moved on to, for example, we come to the Moscow Treaty in 2002, as I recall, and Secretary Powell’s then the chief diplomat, if you will, that brought our stockpiles, Russia’s and ours, down from in the neighborhoods of 30,000-plus to in the neighborhoods of 2000-plus.

So it was a significant start to nuclear arms control. It was a sign to the world that the two superpowers were serious about [inaudible] nuclear weapons. They were serious, at least in part, about the [inaudible] Treaty. And it was a huge step in what was, therefore, a very dangerous process of, essentially, a nuclear arms race, and each side trying to build more and better than the other.

Now, the Trump administration has argued ever since last year that Russia is in the violation of the INF treaty, and that they tried to resolve the matter before deciding to break it. What’s your take on this? Did Russia violate the treaty with a new cruise missile system?

LARRY WILKERSON: This is a complex question to answer, and I’m not sure I have the answers. I have my intuition and my suspicions, and even some facts. The first would be the complexion of this withdrawal, which I think is a fact, is very bad. And I mean that because let’s look at what we’ve done to this point. We have withdrawn from the Paris climate accord. We’ve withdrawn from- not withdrawn, violated the Joint [Comprehensive Plan of Action]. According to us, the other members of the, permanent members of the Security Council, Germany and Iran. And now we’re withdrawing from, as I just indicated, one of the signature achievements of nuclear arms control. So the complexion is bad. I would not done it simply for that reason alone, until I had done a lot more deliberation and a lot more talking with Moscow.

And let’s look at the other [inaudible]. First of all, we know from Russian exercises since about 2013 forward that one of their doctrinal statements is that because of their perceived notion of our having a marked advantage in precision-guided munitions- and that’s NATO plus the United States having that advantage- that they’re going to use small-yield nuclear weapons to block NATO penetration into their territory. So that in and of itself the statement that they’re going to need nuclear weapons. And it’s also a statement, by the way, that they don’t consider- it seems to be, anyway- they don’t consider that as escalatory. Any use of nuclear weapons, obviously, would be escalatory.

But that sort of gives them the motivation to be developing weapons in that neighborhood of what we’ve talked about, what the U.S. has talking about. They are developing these intermediate-range nuclear weapons. But if you explore why they have done that, and you explore U.S. policy with respect to Russia, you can have some empathy for their stating the doctrine, and why they’d want nuclear weapons. Now, let me hasten to say I have no idea, nor have talked to any intelligence personnel who have an idea, I’m sure there are some top secret code word inside the government as to exactly what the hardware is that the Russians are developing. It could well be a violation of the INF Treaty.

But as I said before, this is not the way to deal with this. We need to sit down, we need to talk. We need to try to preserve these things that we’ve created, treaties, to curb nuclear weapons in the world, rather than starting another conflict. So I’m very saddened to see what Trump is doing here. It’s just another indication that this administration is withdrawing from the world, or at least withdrawing from those aspects of the world that blood and treasure has been spent by Americans since 1945 to build and maintain. It’s very disturbing, in that light, in addition to being disturbing in the light of a new [inaudible].

GREG WILPERT: Now, if this matter still could have been resolved through negotiations, why tear up the treaty? There’s speculation that the Trump administration wants to abandon it because doing so would allow the U.S. to deploy intermediate-range nuclear missiles towards China, directed towards China. What do you make of that argument, or are there other reasons?

LARRY WILKERSON: I have a very broad and deep intuition with regard to these sorts of things. I’d say there are a number of reasons. In addition to, let’s just posit for a moment, hypothetically, that the Russians are getting ready to or have violated the treaty. I still would advocate going into talks and consultations, reestablishing some trust and trying to get back on the nuclear arms control track.

But let’s just say that’s true. I would say there are a number of factors in the United States that are [militating] for this development. One is the nuclear contract, which sees itself becoming increasingly non-utilitarian in regards to the U.S. military-industrial complex. Lots of jobs going away. Lots of money going away. States like New Mexico and Washington that have a huge investment in the nuclear industry all staunchly advocating, lobbying for new and better nuclear weapons.

Secondly, I can see the U.S. Air Force in particular, but the U.S. military in general, lobbying for newer and better weapons. And we do this under the guise of spending trillion or so dollars of taxpayer money when we’re $21 trillion in debt on surety, and security, and modernization of our nuclear weapons complex. While some of that is necessary to make sure the weapons work, and make sure they’re safe, and make sure they’re monitored, and so forth, most of it is not necessary. So we’re going to spend all this money- and basically this is the military-industrial complex going after this, accompanied by the Air Force and those services who want new and brighter and shinier things, like the new air [inaudible] missile, we don’t even know how much it cost, Air Force bomber, because it’s going to cost more than the F-35, even.

GREG WILPERT: And so what do you see as being the longer-term consequences of banning the INF treaty? There has been speculation that the U.S. might also abandon the 2010 New START Treaty, which Obama and President Medvedev signed at the time. Will the INF abandonment pave the way for dismissing other treaties? And what would that mean for U.S. and global security?

LARRY WILKERSON: I’m sad to say this, but yes, it does, in fact, pave the way. I know personally that National Security Advisor John Bolton doesn’t like any inhibitions whatsoever on “U.S. sovereignty.” And he sees almost every treaty, particularly the arms control treaties, as being such an intrusion on U.S. sovereignty. So this is the group that is predisposed to do this, to get rid of the international treaties, get rid of the United Nations. John Bolton once said if you knock the top, I think, 10 stories off the the UNit’d probably be just as effective; just as ineffective.

These are not people who are in love with international organizations, with treaties in general, with arms control. What they’re in love with is being so fearful, so huge and powerful, the rest of the world trembles in your presence. And that’s what gives them a feeling of security.

Me, and most of the people I know who are sane and sober, that gives them some real concern. Concerns about future of the [inaudible]. Concerns about the future of state relations. Concerns about the future of [inaudible] and Beijing [inaudible] relations. Look at what we’re getting ready to do, possibly, in Northeast Asia, with North Korea being a declared nuclear weapon power. Probably not- I would say 99.9 percent sure- not going to ever give up those weapons, but go into some latent capability. Possibly they’d be willing to just do better negotiations. Then we’ve got Prime Minister Abe in Japan working at being a nuclear state. Then we’ve got China, because Japan make this decision probably in the next three to five years to go nuclear, become a nuclear weapon state. Then we’ve got China looking at revising what was Mao’s philosophy about nuclear weapons, and building far more nuclear weapons than Japan, so we’ve got a nuclear arms race in Northeast Asia.

GREG WILPERT: Not a very encouraging thought, but we’re going have to leave it there. I was speaking to Larry Wilkerson, Distinguished Professor at the College of William and Mary. Thanks again, Larry, for having joined us today.