Trump Tax Reform Targets High-Tax States, But There is a Way Out

The limitation of state and local tax deductibility from the federal tax code will hit high tax states hard, but states can find ways around the law to maintain their revenues and the benefits they provide their citizens says CEPR's Dean Baker

The limitation of state and local tax deductibility from the federal tax code will hit high tax states hard, but states can find ways around the law to maintain their revenues and the benefits they provide their citizens says CEPR's Dean Baker 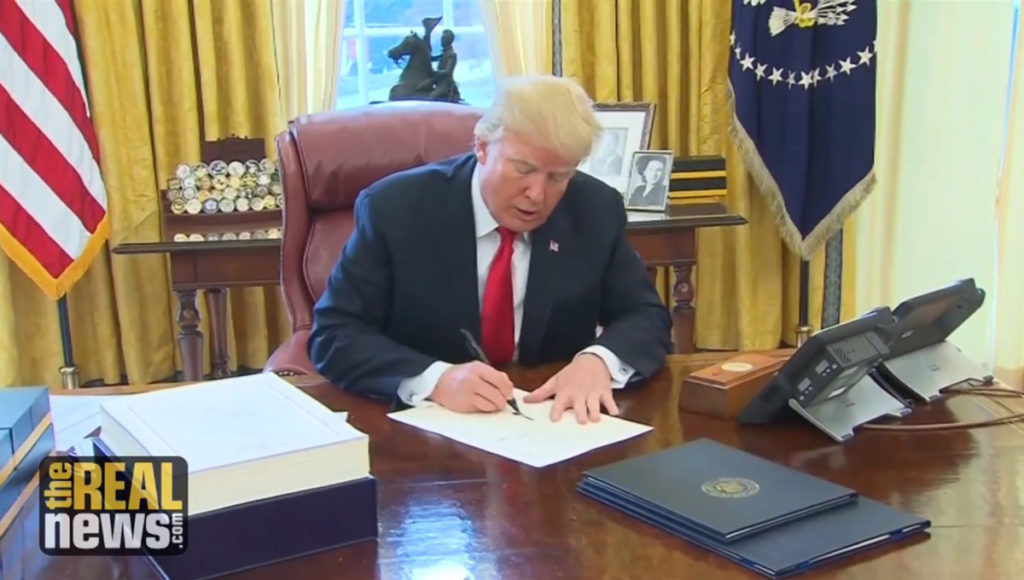 G. WILPERT: Welcome to the Real News Network. I’m Gregory Wilpert, coming to you from Quito, Ecuador. When President Trump signed the Tax Cuts and Jobs Act into law just before Christmas, the largest tax reform in decades, an important provision in this bill limited the amount of state and local taxes that individuals are allowed to deduct from their federal taxable income. This deduction will now be limited to $10,000. Although this provision affects mostly upper-middle and upper-income individuals and high tax states such as New York and California, it could have important ramifications for everyone in those states.

Joining me to analyze the ramifications and what can be done about it is Dean Baker. Dean is a co-director of the Center for Economic and Policy Research and is the author of Rigged: How Globalization and the Rules of the Modern Economy Were Structured to Make the Rich Richer. Welcome back, Dean.

DEAN BAKER: Okay. Thanks for having me on.

G. WILPERT: As I said in the introduction, many analysts, including yourself, are predicting that the limiting of state and local tax deductions to $10,000 will have an effect that goes beyond the upper middle and upper class who actually take advantage of these deductions. Why is it? What other consequences might this provision have?

DEAN BAKER: Well, the basic story is that as it stands now, where have, currently, 39.6% federal tax rate for higher-income people, in effect, the federal government picks up much of the state and local taxes that high-income people are paying. What that means is, if the state, say the State of California or the State of New York, they do have progressive income taxes. If they are taxing $10,000 of the higher-income person’s income, the federal government, in fact, is refunding $4,000 of that on federal income taxes. But if you limit this so that higher-income people are above that $10,000 cap, you can now deduct up to 10,000 of state and local taxes including property taxes, then that means they’re a higher burden placed on these high-income individuals. Now, many of us, myself included, don’t especially care about that, but the point is, these are powerful people.

Two points I’d make on that: One is you can be absolutely sure they’ll be much more resistant for future tax increases knowing that, dollar for dollar, it’s out of their pocket. But in many cases, they’ll be pushing for lower taxes and they will likely get it. What that will mean is there’s less money for state services, for state Medicaid programs, for education, for other benefits that these states provide, as opposed to say, Mississippi, Louisiana, lower tax states, where this would not be an issue.

G. WILPERT: In a recent article that you published in the Magazine American Prospect, you developed a proposal for how states might circumvent the higher federal taxes because of this limitation on the SALT that is the state and local tax deduction. Explain your proposal to us.

DEAN BAKER: Basic story is that states could have a employer-side payroll tax as a substitute for at least a portion of their income tax. Now, it’s a little complicated, ’cause insofar as some people are getting money from stocks, from rent, whatever, no reason to touch that. But the idea is that, let’s say a state has a 5% income tax. What you would do is, instead, replace that with a 5% employer-side payroll tax. Take someone who’s earning 200,000 a year. Currently, they’re paying … They get that 200,000 check from their employer, and 5% of that, $10,000, goes to their state government for state taxes. Instead of that, you say, “Okay, we’re gonna impose a 5% employer-side payroll tax” so the employer’s gonna send $10,000 to the state.

Now, what most economists will say is, “Well, employers don’t care whether they paid money to the worker or money to the government. If they’re paying 200,000 and now they have to pay this 10% tax, well, they’re gonna take it out of the workers’ wages. So the workers will receive a 10% pay cut.” Well, that ends up being, basically, a wash, because before, they’d been sending that $10,000 to the state as their taxes. Now they’re getting 190,000 instead of 200,000. The big difference here is, before, they were sending that 10,000 to the state government as taxes. They were still paying the federal tax on it. Now they’re not gonna have to pay the federal tax on it. So, in effect, preserves the tax deductibility of state and local income taxes.

That’s the point here, that, basically, it gets around this effort by the Republican Congress and President Trump to make people in high tax states like California, New York, pay higher taxes.

G. WILPERT: A counterargument to your proposal, though, would then be that limiting SALT deductions is actually a good thing. That is, some people might argument from a progressive perspective because it would require high-income individuals to pay more federal taxes, which could then be useful for our things, such as federal education or health programs. That is, according to the Tax Policy Center, limiting SALT deduction would increase federal revenue by $36 billion next year, and this could rise up to 90 billion by 2024. What is your response to such an argument?

DEAN BAKER: Well, it definitely reduces. That does mean more revenue for the federal government, but it’s likely gonna come at the expense of revenues state and local governments … ’cause, again, these people are gonna be looking to have their taxes reduced. And keep in mind, you’re only doing that in high-tax states. It’s people in New York and California who are paying more money, not people in Louisiana, not people in Mississippi, not people in other lower-tax states. So this is quite exclusively designed as a way to hit high tax states. I think it’s fine; our wealthy people should be paying more. But not ’cause they live in a state that’s trying to provide benefits to more moderate income people.

G. WILPERT: Couldn’t one say that your proposal is an effort to game the tax system? That is, instead of having individuals game it, it would be the states doing so? Isn’t that something that should be discouraged, considering how gaming the tax system is an important reason that tax revenues aren’t has high as they ought to be?

DEAN BAKER: Absolutely. It’s an effort to game the tax system. This tax act was an incredibly cynical proposal by the Republicans and this is a cynical response by state governments. It was designed to screw higher-tax states that try and provide decent benefits for low and moderate-income people, and it’s totally appropriate to turn around and go, “Okay, well, guess what guys? You weren’t too bright. We outsmarted you. You didn’t do what you wanted to do.” As a general rule, absolutely. We shouldn’t be looking to have state and local governments trying to screw the federal government out of their taxes. I would hope that we would get Congress, perhaps a future president, to go back and redesign this in a way that the state and local governments and federal governments are working together. But my quip on this is that given what we’re faced with, why should Donald Trump be the only person who doesn’t pay income taxes?

G. WILPERT: Finally, Dean, do you see any movement on the part of the states? I mean, particularly high tax states such as California and New York ought to somehow move in the direction that you’re proposing?

DEAN BAKER: Absolutely. I know in California, there’s already a state legislator who introduced something somewhat different than this but along the same lines, with the idea to reduce their tax liability. I’ve had a number of aids to New York, representatives, also ask me about this. There’s definitely interest. I’ll be very surprised if someone doesn’t move on it. Of course, if one state moves on it, people in other states will be asking questions, “Why are we being suckers?” I think this is very likely to take off and I think it’ll have a very large impact.

G. WILPERT: Okay. Well, I was speaking with Dean Baker, co-director of the Center for Economic and Policy Research. Thanks again, Dean, for having joined us today.

G. WILPERT: And thank you for joining the Real News Network.