The Nation's Ken Klippenstein discusses the leaked documents that reveal CBP as the federal agency detaining protesters in Portland.

The Nation's Ken Klippenstein discusses the leaked documents that reveal CBP as the federal agency detaining protesters in Portland. 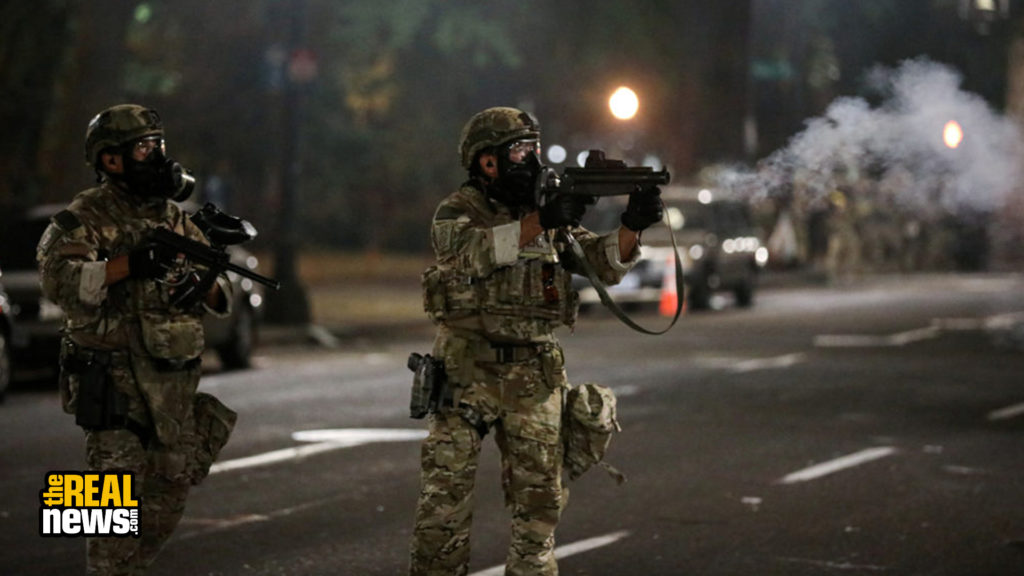 Jaisal Noor: Welcome to The Real News. I’m Jaisal Noor. Chanting, “Feds stay clear, the moms are here.” Dozens of mothers lined to form a human shield to protect anti-racist protestors from federal agents who Portland’s mayor has blamed for escalating violence in the city. The mothers were later teargassed.

Speaker 2: Their actions are terrifying. I mean, we as a democracy … and we need to stand up. I’m 60 years old. I probably shouldn’t be here in public, but this is beyond acceptable.

Jaisal Noor: Amid massive spikes in coronavirus cases across the US, instead of launching a war on COVID-19, Trump has launched a war on protesters, including in Portland where unidentified federal agents have arrested anti-racist protestors for the last several days. The Nation obtained documents shedding light on what’s happening in Portland and the plans to take those tactics nationwide. We’re joined by the Nation’s DC correspondent, Ken Klippenstein, to talk about his new piece, The Border Patrol Was Responsible for an Arrest in Portland. An internal memo obtained exclusively by The Nation details a coordinated program of domestic counter-insurgency. Thanks so much for joining us, Ken.

Ken Klippenstein: Thanks for having me.

Jaisal Noor: So tell us what you found.

Ken Klippenstein: So what was given to me from an official within Department of Homeland Security, were essentially talking points that they were given to be able to interface with the public and with the media about what exactly this operation is. And it should be pointed out that this didn’t all begin last week, although that’s when social media kind of blew up and the media started taking notice. Federal agents have been operating in Portland and elsewhere for weeks now. And the authority that this operation drives from is when President Trump announced his executive order to protect the monuments and respond to civil unrest. The Department of Homeland Security convened a task force called the Protecting American Communities Taskforce, PACT for short. And so it’s under PACT that these federal agents, border patrol in some cases, are operating.

Ken Klippenstein: Yeah, that’s the biggest part of the scandal, I think, is that having unmarked cars and in some cases, unmarked federal agents, that’s actually consistent … A formal senior intelligence official at DHS told me that that’s often done at the discretion of supervisor-level officials within DHS. Now, I want to stress that doesn’t mean it’s good or that it’s desirable. But unfortunately, I think this is what it looks like when you have DHS running around. Now, I want to distinguish their ability to move around in unmarked cars from the fact that they’ve been deployed at all. That’s a completely separate legal question, and that’s one that’s being litigated right now.

If you look at what the Trump administration has said, it looks like a lot of it is driving from this executive order. And it should be pointed out that Bill Barr, the attorney general, he’s a big fan of a unitary executive. And I can’t think of a better illustration of that philosophy of law, the idea that the presidency and the executive branch enjoys all of these special powers, especially in emergency-type situations. It should be pointed out that this is all consistent with his way of doing things. It was reported by legal observers recently, I can’t remember what outlet reported it, but that Bill Barr actually did something very similar, deploying federal agents to the Virgin Islands 15 years ago or so in response to the aftermath of a hurricane.

And it looks like there’s very similar authorities that they’re trying to drive here, saying they’re protecting courthouses and things because you can play all sorts of games with the law and find justification for things. So long story short, the legal justification for the actual deployment of these federal officers to respond to what frankly looks like, at most, broken windows, graffiti, that kind of thing, that’s really what the debate should be around. When you’ve got these federal agents not identifying themselves, that is unfortunately a characteristic of DHS. When you watch a movie or something like that and you see FBI, ATF, that kind of thing on their suit, maybe in some cases, NCIS, they’re wearing a hat that labels it on it. DHS is quite different from all those agencies because they don’t actually … They have certain freedoms to not identify themselves in that way. So the debate here should really be, why is DHS involved in something that according to the mayor of Portland and the senators there, is something that can be handled by local law enforcement?

Jaisal Noor: Is this the first time these kind of tactics have been used in this country?

Ken Klippenstein: No, it’s not. Again, field-level supervisors can authorize them not to identify themselves. And as a current DHS official told me, if they can find any sort of justification for it that will provide them tactical advantage, they’re going to use it. And as I mentioned, in the case of Bill Barr, he has created legal justification years and years ago for the deployment of federal troops to protect courthouses.

So there is context. There is some context for that, whether or not that’s legally viable, we can debate that. But certainly the not having themselves identified, that’s something with plenty of precedent. But what’s really unusual here is the fact that the locality doesn’t want any of this help. And in fact, when I talked to law enforcement folks within DHS as well, who I should point out are not left-wing activists by any means, they’re saying this stuff is counter productive even if you assume that we need to have a big law enforcement response to all this. So what was told to me is that when federal law enforcement identify themselves, that can have a deterring effect on the sorts of civil unrest that the administration claims to be concerned about. So when they’re operating in secrecy, there won’t be that deterrent because you don’t know that the police are sitting there watching.

Jaisal Noor: This is all coming amid this disastrous response from the Trump administration to COVID-19 that the Times had a piece about how they were trying to just pretend that it was going to go away by itself in April. And obviously, that has backfired insane levels. The US has 4% of the population, but about a quarter of the world’s deaths and cases, and there’s no end in sight. Do you expect these tactics to escalate around the country as we approach the November election? Trump, as of right now, is behind in the polls. And it seems like defending monuments, cracking down on protests, the arguments that crime is out of control in these Democratic-controlled cities … I’m quoting Republican talking points and campaign ads right now. But they’re saying this is the justification to go into these cities to sort of restore order. Can we expect more of this, in the upcoming weeks and months?

Ken Klippenstein: Absolutely. If you look at the documents that have been provided to me, not only do they say it’s unclear how long the timeline is going to be for these deployments, it also doesn’t say where. So these are instructions for them to interface with the media and answer their questions. They say not to disclose where these federal agents are going to be deployed or for how long, because they claim that that’ll hurt operational security. But I have to imagine that they could say, “We’ll be in this state or city” or something without necessarily imperiling these potential investigations. But yeah, not only did they not know that, they also had a part in these documents saying that they have drones raring and ready to go for when they’re called upon. So I think we could see things dramatically escalate, and unfortunately, that we will.

Jaisal Noor: A lot’s made of Trump’s interview with Chris Wallace this weekend, and Trump wouldn’t commit to accepting the election results in November. So yeah, we’re all going to be following this story and watching it really closely. Ken Klippenstein, thank you so much for joining us, The Nation’s DC correspondent and has been following this beat for a long time. So thank you so much for joining us for this interview.

Ken Klippenstein: Great to be with you.

Jaisal Noor: Thank you for joining us at The Real News Network.