It's a shame to see Janet Yellen, who did an "outstanding job" as chair of the Federal Reserve, get fired in favor of an investment banker who doesn't have a background in economics, says Dean Baker, co-director at CEPR

It's a shame to see Janet Yellen, who did an "outstanding job" as chair of the Federal Reserve, get fired in favor of an investment banker who doesn't have a background in economics, says Dean Baker, co-director at CEPR 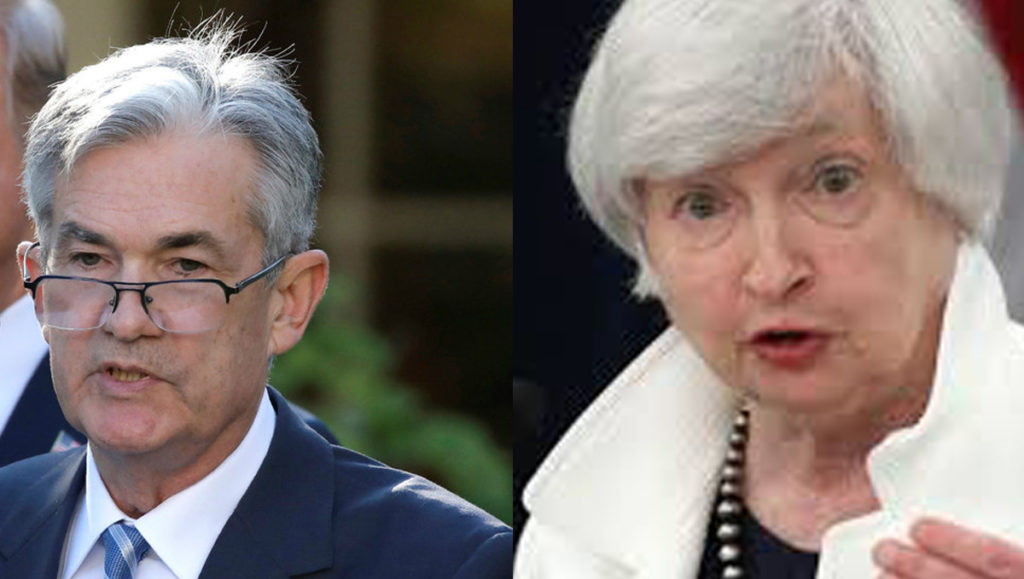 SHARMINI PERIES: It’s The Real News Network. I’m Sharmini Peries coming to you from Baltimore. On Tuesday, President Trump announced his pick for the most important economic policy position not only in the United States but the world over, the chair of the Federal Reserve.

DONALD TRUMP: Accordingly, it is my pleasure and my honor to announce my nomination of Jerome Powell to be the next chairman of the Federal Reserve. Congratulations, Jay.

SHARMINI PERIES: Then on Tuesday, Senate confirmed Trump’s pick, Jerome Powell, in a 84 to 13 vote as the next chairman of the Federal Reserve. He is of course replacing Janet Yellen, whose term ends in February. In recent years, presidents have generally allowed the Fed chair to stay on for a second term, but Trump has decided to depart from that norm. Jerome Powell is not expected to take a remarkably different policy direction than his predecessor, Janet Yellen, but we’ll take that up with our next guest.

Joining me now from Washington D.C. is Dean Baker. Dean is co-director of the Center for Economic and Policy Research and the author of Rigged: How Globalization and the Rules of the Modern Economy Were Structured to Make the Rich Richer. Welcome back, Dean.

SHARMINI PERIES: Dean, Jerome Powell comes from the banking sector, not a scholar of the Fed policies and the history of the Fed, like that of Janet Yellen. What do you make of this appointment and his qualifications to lead?

DEAN BAKER: Well, it’s a mixed story. I mean, other names that have been floated, Lawrence Taylor, [Kevin] Warsh, these people were people who had been on record as being very hawkish and wanted to reverse Janet Yellen’s policy, wanted to combat inflation, a strange idea given inflation is below the Fed’s target. But they clearly were not concerned about unemployment. Powell, to his credit, has largely followed Yellen in his term as governor and before that, Bernanke, in other words, meaning he’s been willing to support relatively aggressive measures to reduce unemployment. So in that sense, I see it as a relative positive.

On the negative side, he doesn’t … He’s at least not on record as being strongly in support of regulation. We naturally worry about that, someone coming from the financial sector like Powell. Also, he doesn’t have the background that Yellen does. I mean, Yellen has spent her career in economics, many of it at the Fed. She was a governor for four years before. She was head of the Council of Economic Advisors. She was the head of the San Francisco Federal Reserve Bank and then vice chair. So she has a much longer career. The reason why that could really be important is that she didn’t have to turn to someone for advice. One of course worries that Powell, if he’s there, not having that sort of background in economics, who he’ll be turning to and with so many key positions at the Fed open, that’s a big concern.

And I’ll just add one last thing, of course Yellen, it’s not a secret obviously, she’s the first woman Fed chair. It’s very disappointing to see someone who really did an outstanding job not get reappointed. I think it’s hard to ignore the fact that, here’s a woman in that position, does a great job by almost all accounts, even President Trump praised her, and she doesn’t get reappointed. She gets fired.

SHARMINI PERIES: Now, there are two or three main issues that Fed has been dealing with recently. First, there is the Federal Reserve’s interest rates that they set. Second, there has been the policy for quantitative easing that the Fed has taken a lead in doing. And then third, there is the shrinking of the Fed’s balance sheet itself. With regard to the interest rates, if he follows Yellen’s relatively cautious approach in the immediate future, what his policies might be?

DEAN BAKER: Well, my guess is he would follow the path that Yellen had set. She had indicated that … I mean, she didn’t outright say it but there’s pretty much this idea, which she certainly did nothing to dispel, that they would raise interest rates three times over the course of 2018. That’s a modest pace, it’s not a horribly rapid pace.

What I worry about is that if the economy were to in any way falter, if we start to see inflation come in ever lower, because it has been quite low, he might be more reluctant to move away from that course than I believe Yellen would. Yellen, at several points in the past, had indicated a more rapid pace of interest rate hikes than the Fed subsequently went through because she said, “We don’t see the inflation, we don’t see the jobs to justify that.” It’s not that I think the economy is so weak right now but if I had to take a guess, are we going to end up in a situation where you justify less hikes rather than more, I think we’re on the less hikes side. So I think he would be more reluctant to depart from the path that they set than she would’ve been, based on her standing and her experience.

SHARMINI PERIES: All right. The issue of balance sheet of the Fed itself, what is this about and what could we expect under Jerome?

DEAN BAKER: Well, the Fed accumulated somewhere around $4 trillion in assets as part of its quantitative easing and they had begun to sell those off. And that concerns me because that will put upward pressure on interest rates. Again, they bought the assets that were a part of that. Buying up bonds, you drive up their price, that lowers interest rates, so this reverses that. This is another way to raise interest rates, so I worry about that.

It also increases the deficits because, as it stands now, when the Fed owns, let’s say … well, $4 trillion in assets, it accumulates somewhere around $100 billion a year in interest on those assets, they refund that to the Treasury. That lowers the deficit by $100 billion. On the other hand, as they sell off those assets, they stop accumulating that interest and that means the deficit’s somewhat larger. Now, I’m not personally concerned that the deficit will be somewhat larger, but I know a lot of people are concerned about large deficits and that could lead to more pressure for budget cuts. So I would rather not see them sell off those assets, or at least sell them off slowly. But I do worry they’re on a path to selling off the assets and, at least over a number of years, that will affect the budget deficit, which, again, if there’s pressure to reduce the deficit, really good way to have a lower deficit is just to have the Fed hang on to those assets.

SHARMINI PERIES: Finally, the issue of quantitative easing. I know that Janet Yellen held onto this policy and used it effectively. What can we expect under the new Fed?

DEAN BAKER: Well, I think that’s a tool in their toolkit now. In the event we see another downturn, I think that under Powell we could expect he will also try to pursue quantitative easing as a way to boost the economy. This is something that the Fed hadn’t really done since the ’30s, since The Great Depression. They were sort of treading in uncharted waters, or at least I think they perceived it that way. But having had the experience during The Great Recession, of used it at least somewhat effectively, I think that they won’t hesitate to use it again if they think the situation requires it.

SHARMINI PERIES: All right. Dean, I thank you so much for joining us. I’m sure we’ll get another chance to unpack some of the new Fed’s policies as it evolves. Thank you.