Salvadorans who have lived in the U.S. for decades under Temporary Protected Status now have 18 months to leave the country. Prof. Leisy Abrego of UCLA says the news is devastating for Salvadorans, but they have hope that Congress will intervene before time runs out

Salvadorans who have lived in the U.S. for decades under Temporary Protected Status now have 18 months to leave the country. Prof. Leisy Abrego of UCLA says the news is devastating for Salvadorans, but they have hope that Congress will intervene before time runs out 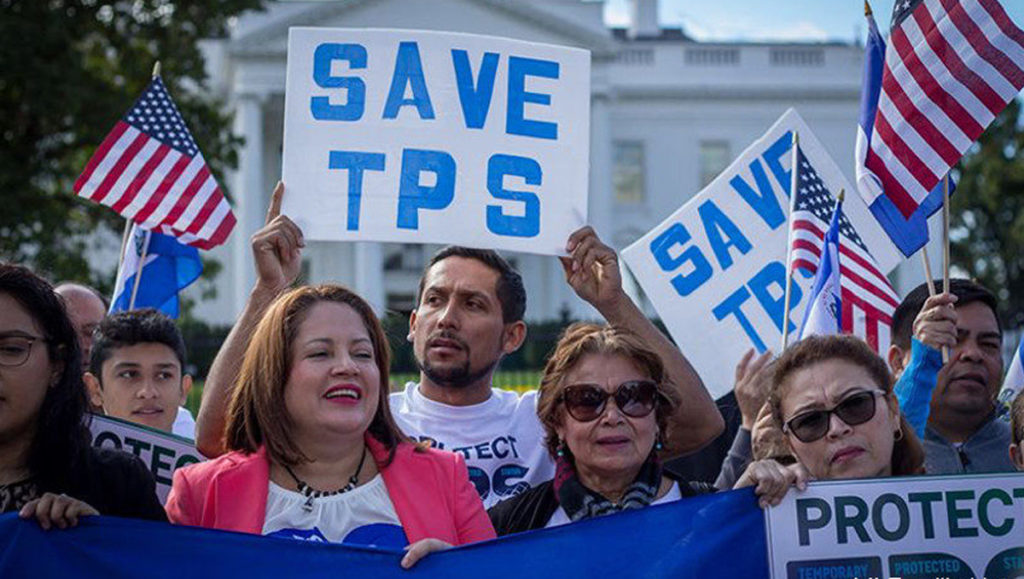 GREGORY WILPERT: Welcome to The Real News Network. I’m Gregory Wilpert coming to you from Quito, Ecuador. The U.S. Department of Homeland Security announced on Monday that it is ending Temporary Protected Status, or TPS, for 200,000 Salvadoran refugees. Salvadorans under TPS now have 18 months to either change their immigration status, or face deportation back to their home country of El Salvador. Many of them having been living in the U.S. for decades, and were given TPS in 2001, following an earthquake that killed over 1000 people.

TPS was renewed regularly on humanitarian grounds since then. Last fall, the Trump administration already terminated TPS for 59,000 Haitians, and 2,500 Nicaraguans. Joining me to discuss the termination of TPS for Salvadorans is professor Leisy Abrego. Leisy is associate professor in Chicano and Chicano studies at UCLA. She’s the author of ‘Sacrificing Families: Navigating Laws, Labor and Love,’ a book that analyzes U.S. policies in shaping the experiences of Salvadorans with different immigration statuses, including Temporary Protected Status.

Thanks for joining us today Leisy.

LEISY J. ABREGO: Thank you for having me.

GREGORY WILPERT: First, I should note that you yourself are originally from El Salvador, so how are Salvadorans who are in the U.S. under TPS reacting to this announcement now that they have 18 months to leave or somehow change their immigration status?

LEISY J. ABREGO: As someone who’s a member of the community, but also someone who conducts extensive research on these matters, I am aware that this news has been devastating for not only TPS holders who have been in this country for almost two decades under this category, but also for their extended families, both here in the U.S. and in El Salvador.

GREGORY WILPERT: As you mentioned, TPS is something you’ve written about, or worked on as part of your academic work. Give us some background as to how it came about, and how it came to be applied to Salvadorans.

LEISY J. ABREGO: TPS was actually a category that was created under the first president George Bush to provide a little bit of a reprieve for Salvadorans who had at the time, been denied regular asylum. People had been applying for asylum within the United States after fleeing many of the consequences of the civil war funded by the U.S. In coming here, and trying to attain asylum, they were denied almost in every case, only two to three percent of Salvadorans were granted that category, and actually both Salvadorans and Guatemalans. So in fighting against that discrimination, there were various options that were created, and TPS was one of those created specifically for Salvadorans in the early 1990s.

That ended, and in this case, the group of people that we’re talking about now, it was made available to them once again, some of the very same people who had been here since the ’80s, and the ’90s. In 2001 after the massive earthquakes in El Salvador, people who were already here, and who were at the time undocumented, were allowed to apply for this particular status.

GREGORY WILPERT: When the Department of Homeland Security announced on Monday that it is terminating TPS for Salvadorans, it said that the status is being revoked because it is meant to be temporary and not permanent, what is your response to this argument that TPS should not be a permanent situation?

LEISY J. ABREGO: My response is that this administration is not thinking in the most logical way. To me, the most logical thing to do would be to take this group of people who have cyclically every 18 months, for the past 17 years, been paying their fees, renewing their applications, proving that they have squeaky clean criminal records, the easiest, and most logical thing to do that would benefit not only the recipients but this country as a whole, is to grant them legalization. Instead, they’re taking the cruel, inhumane route, and pulling the rug from underneath these people who have been establishing lives, living with their families in this country for almost two decades.

GREGORY WILPERT: El Salvador’s president, Salvador Sánchez Cerén, also called the Homeland Security Department shortly before the announcement of the program’s termination to plead for another extension, why did he do that? What is at stake for El Salvador here?

LEISY J. ABREGO: El Salvador, and many of the countries that will be receiving the people whose TPS has ended, Haiti, Nicaragua, it’s really difficult in those countries to think about how to reincorporate such large numbers of people who have been outside of the country for years, decades in some cases. In every case, every 18 months, the presidents that have this designation in the United States have regularly come to meet with administrations in charge in the U.S., who in every case up until now have renewed for the Salvadoran case. This was part of the routine that presidents come and meet, and prove that the situation on the ground, the conditions, are not great for people to be returning, so that was part of that same routine.

GREGORY WILPERT: But I also understand that El Salvador’s economy, to a large extent, depends on remittances. Can you tell us a little bit more about that? To what extent, and what that means in terms of the families involved?

LEISY J. ABREGO: Absolutely. So TPS holders are some of the people who remit money back to their families, their loved ones, their towns in El Salvador where 16% of their gross domestic product is based on remittances from abroad, mostly from the United States. When I say that the ending of TPS will have devastating consequences, not just for the TPS holders, that’s part of what I mean, it’s really removing everything that they have created here, but also, ending the labor that they’ve put into creating a home here, and supporting their loved ones back in El Salvador. Those remittances will have to stop if these people are not allowed to work as they have been for the past 17 years.

GREGORY WILPERT: What do you expect now that most Salvadorans will do in response to the termination of TPS? Will they return to El Salvador? Change their immigration status, or become undocumented? What do you think will happen?

LEISY J. ABREGO: You know, my sense from being involved in some of the grassroots organizing that has been going on over the past several years, but especially in the past year: people are fighting this, people are demonstrating that they are invested in a future here, that they have been since they got here, and so there’s a national campaign to save TPS, to protect it from going away, and to really think more broadly about legalizing this group of people that has paid into this system for so long. There’s that effort going on.

Individually, I think that people are going to have to take this opportunity to find out what other possibilities there might be for legalization. My understanding is that they’re very limited, but hopefully some people will be able to find maybe through a new visa, maybe through marriage to a U.S. citizen, maybe through various other … very limited possibilities that will hopefully benefit some of them into legalization. More importantly though, a national campaign is really about getting Congress to act to save TPS, to come up with an option that will lead to legalization for this population. So that’s where most of the community’s hope is right now.

GREGORY WILPERT: Okay, well, we’ll continue to follow this situation. I was speaking to Leisy Abrego an associate professor in Chicano and Chicano studies at UCLA. Thanks again Leisy for having joined us today.

LEISY J. ABREGO: Thank you for covering this important topic.