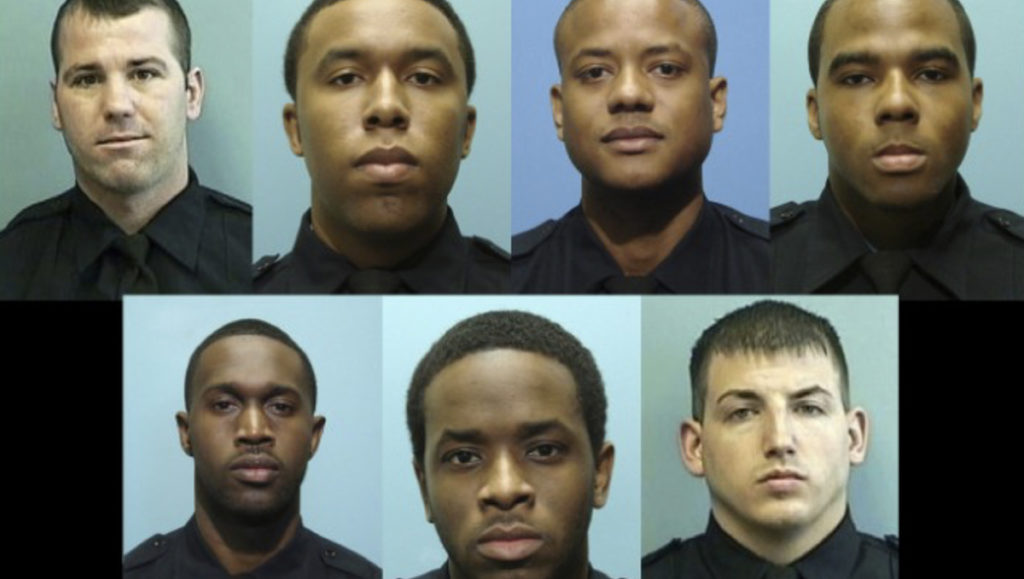 BAYNARD WOODS: For The Real News, I’m Baynard Woods, coming to you from Baltimore, Maryland, where two members of the police department’s Gun Trace Task Force stood corruption trial today. I’ve been covering this kind of stuff, police corruption, for a long time, and it was astounding to see the kinds of details come out as just one of their co-defendants who’s already pled guilty testified. So two officers were standing trial in this case today: Detective Daniel Hersl, who for a long time has been accused by people in Baltimore’s community, and specifically, rapper Young Moose, that I’d been writing about for a long time, of robbing from them and planting guns on them. And the second officer on trial, Marcus Taylor, was also someone who had been alleged by people in the community for some time of being engaged in this material. But we heard one of his coworkers today, Maurice Ward, for hours, as federal prosecutors questioned him, sit in the court room and describe a level of corruption that, even for Baltimore, is really just gobsmacking.

This unit, this Gun Trace Task Force unit, would rob people, would find out from the cellphone of another drug dealer, who a drug dealer that may have a lot of money in his home is, put tracers on their cars, track their cars, follow them for days, then when they’re not home, go in, raid their house, steal all of their money. They went in one guy’s place — later got a warrant for it — busted open the safe, stole $100,000 or more, left $100,000 in there, and then recreated breaking open the safe and made an entire fake video for it.

Ward, the former detective who has already pled guilty to a number of RICO charges and other racketeering charges, said that in that case, he got $20,000 out of it, and he threw that money away when he got to his house because there was no good way to hide it. And over time, was a big part of this, and this goes beyond Baltimore. Some people look at the wire and they say, “Of course Baltimore’s police are corrupt.” But this is something you have to think about in every city around the country when they’re allowing police — these officers often started their shifts after they were done. They were supposed to work from eight until four o’ clock; they would come in at four, and then work and bring some guns in, and as long as they got guns, would sometimes charge eight hours of overtime, 12 hours of overtime in a single day, while also being paid for their ordinary shifts.

And Detective Wayne Jenkins, Sergeant Wayne Jenkins who was the head of the unit, he would do this. He was on vacation in Myrtle Beach, and was able to claim overtime for all of the days while he was on vacation. So this is really systemic corruption. One of the defense of Taylor is basically — in opening arguments, his lawyer wasn’t able to say much except that the witnesses are liars — but his is basically that he’s following directions. He was following the orders of Wayne Jenkins, who really does seem to be, from the testimony, a mastermind of this. But testimonies showed that Taylor had been stealing on his own before he ever joined Jenkins’ squad, along with Ward, who was testifying.

And then Detective Hersl had a really novel argument. He acknowledged that he was stealing the money, they stole thousands and thousands of dollars from suspects. He acknowledged that he was involved in stealing the money, but they denied that it was robbery, which is what the charge is, and said that instead it was theft — that because there was a legitimate probable cause against the people that they were arresting, that they had the right to take the money; it was just when they didn’t submit it to evidence that that became the problem and it was theft.

So the defense in these cases, it looks very shaky, which is why everyone else who’s involved in the case has already pled guilty, and these are the only two who are standing trial. There’s no court tomorrow, but we’ll be back in court on Thursday, and we’ll keep you up to date on this really growing and massive corruption scandal here in Baltimore which brought down the police commissioner just Friday, days ago, there’s now a new police commissioner. So we’ll keep you up to date on the fast-changing developments. Here at The Real News, I’m Baynard Woods.