Obama admin attempting to mobilize anti-war forces to support its attempts to reach a deal with Iran, the same forces that blocked its push for war with Syria

Obama admin attempting to mobilize anti-war forces to support its attempts to reach a deal with Iran, the same forces that blocked its push for war with Syria 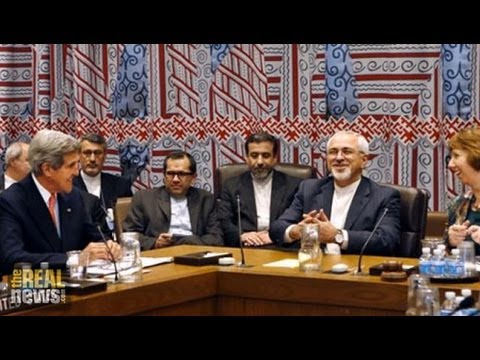 On Wednesday, a Senate committee heard from Secretary of State John Kerry about whether or not to move ahead with legislation to strengthen economic sanctions on Iran. This comes after the White House has come out strongly against such sanctions. This is White House Press Secretary Jay Carney.

JAY CARNEY, WHITE HOUSE PRESS SECRETARY: This administration has imposed the most crippling sanctions in history against Iran. And we appreciate the leverage those sections have given us, and we appreciate the partnership that Congress has given us in that effort. But this is a decision to support diplomacy and a possible peaceful resolution to this issue. The American people, justifiably and understandably, prefer a peaceful solution that prevents Iran from obtaining a nuclear weapon. And this agreement, if it’s achieved, has the potential to do that.

NOOR: Now joining us to discuss this is Trita Parsi. He’s the founder and president of the National Iranian American Council.

DR. TRITA PARSI, PRESIDENT, NATIONAL IRANIAN AMERICAN COUNCIL: Thank you for having me.

NOOR: So, Trita, can you quickly bring us up to date with where negotiations stand right now and when they will resume?

PARSI: Well, talks took place last week, and they went on for three and a half days rather than just two days, but ended up not being conclusive, because at the last minute the French came in and changed the goalpost.

And now the talks have been scheduled to resume on the 20th and 21st of November, next week, but there is a fear that the momentum for diplomacy will be lost, because great momentum was achieved in Geneva last time. They were very close to a deal. In fact, there was essentially an agreement on a draft that the French then later changed.

And the question is: can they find their way back to a deal now? I’m certain that it can happen. The problem, though, is that [incompr.] has been given to those who want to sabotage the deal, those that don’t want to see any agreement it all. And that may include some members of Congress who are pushing very hard to pass sanctions before next week.

NOOR: So I wanted to ask you about some of those forces that are opposing this deal. Can you talk about the role of Israel, which gets more attention, and also Saudi Arabia, which has received a lot less attention, but they equally oppose any type of deal reached in these negotiations?

PARSI: Well, the from the Israeli perspective, the prime minister of Israel has come out very, very strongly and made it very difficult for the president to proceed with the negotiations when he’s coming out there and saying this is a bad, bad deal. He’s taking a disagreement between the U.S. and Israel and made it very, very public, and that’s, some would argue, a tactical mistake on his end. But at the end of the day, it’s also making the work of the president, president of the United States, much, much more difficult.

The Saudi perspective, I think, is actually more hawkish, actually, then the Israeli one, in the sense that I think there are certain elements or certain variations of the deal that the Israelis deep inside would be happy with–they would never cheer it, they would never praise it, they would never credit the U.S. for it, but they would be content. From the Saudi perspective, I fear that actually there is no deal that they would be happy with, because what they’re afraid of is not a nuclear Iran or an Iran with a limited enrichment capacity. What they’re afraid of is an Iran that actually manages to get along better with United States. That’s the biggest threat to them, the way they seem to view it. And as a result, they’re very opposed to it and are also making their opposition quite known.

NOOR: It seems like the White House is preparing to square off with pro-Israel lobby groups like AIPAC in Congress over the next few days as the House and Senate push bills that would increase sanctions on Iran. Can you talk about how that’s shaping out right now?

PARSI: Well, I think they are and they’re not. On the one hand, they’re almost forced to do it, because these forces are attacking the deal even before it’s been struck. But at the same time, I think they also know that once there is a final agreement and once they are very, very close, there is no way that they can win this without taking these guys on. And I think Carney’s comments about the American people not wanting a march to war was an effort by the White House to start mobilizing the antiwar sentiment of the American population to their side, the very same forces that prevented the presidents Syria war is the forces that the president now needs in order to prevent Congress, Bibi Netanyahu, and others from preventing diplomacy with Iran, which eventually would lead to war.

NOOR: The fact that France essentially sunk negotiations over the weekend has gotten some attention. But what is their interest in stopping the peace talks?

PARSI: It’s actually quite unclear to a lot of people, I mean, including many Europeans that I’ve spoken to–can’t really pin down one or two very, very compelling reasons as to why this could happen. But there is a couple of reasons that have been thrown out there, and they are probably not alone sufficient to explain this, but they may contribute to an understanding.

One is that the French are very upset. President Hollande is very upset about the way that the president changed his mind on Syria and left France as the only country that was still out there in favor of attacking the Syrians. So there’s a sense of abandonment and betrayal there that may be a motivating factor.

Moreover, there are speculations about financial deals between Saudi Arabia and France that France is trying to get a lot of contracts that otherwise likely would have gone to the United States, that they’re taking advantage of the tensions that currently exist between the U.S. and Israel and the U.S. and Saudi Arabia in order to cash in on them. And one way of doing so is to use France’s role in the negotiations, its holding a veto in the Security Council, in order to be able to get these financial benefits from some of these countries. And France is facing a very, very severe financial crisis, an economic crisis right now.

So those explanations may actually go, you know, a certain distance in explaining this.

PARSI: I would first of all say that I think this is very good, because at the end of the day this would freeze elements of the Iranian nuclear program and pave the way for a final deal that would close off their path towards a weapons option. The Iranians would keep enrichment on their soil, which is critical to them. That’s their bottom line. But the U.S. would make sure that there’s no weapon there. And that way both sides would be winners–and so, incidentally, would Israel and other states in the region who are concerned about this.

This actually would be a good deal for Israel as well. That’s my second argument. The Iranians know that they would not have a deal durable deal with United States unless they simultaneously shift their attitude towards Israel. It doesn’t mean that they would become friends are partners with Israel, but the degree of hostility that Iran has held against Israel would most certainly soften.

Thirdly, I think this is good for democracy and human rights in Iran, because as long as there is this threat of war and these crushing sanctions, it’s made it very difficult for the pro-democracy movement in Iran to be able to do what it does best, which is to challenge the political limitations in Iran and move that country in a democratic direction.

I think there is a lot of areas of collaboration between the United States and Iran that are not being utilized right now because of the tension over the nuclear issue, such as collaboration against the Salafist and Wahabi Islamic terrorists around al-Qaeda. They have targeted both the United States and Iran. They’re creating a tremendous amount of problem in the region as a whole, in Iraq. They are also creating a lot of problems in Syria. I think it’s making it more difficult for the Syrian opposition that so many elements of the opposition are close to al-Qaeda. There’s areas of collaboration that both countries in the region as a whole could benefit from, but it’s been completely off-limits as a result of the nuclear issue. So I think it would be valuable to explore those.

And finally, because at the end of the day the White House is right, if there isn’t a deal down the road, there’s going to be a military confrontation, a deal that avoids Iran having a nuclear option and at the same time avoids a war with Iran is a fantastic deal. And that’s why it should be pursued.

NOOR: Trita Parsi, thank you so much for joining us.

PARSI: Thank you so much for having me.