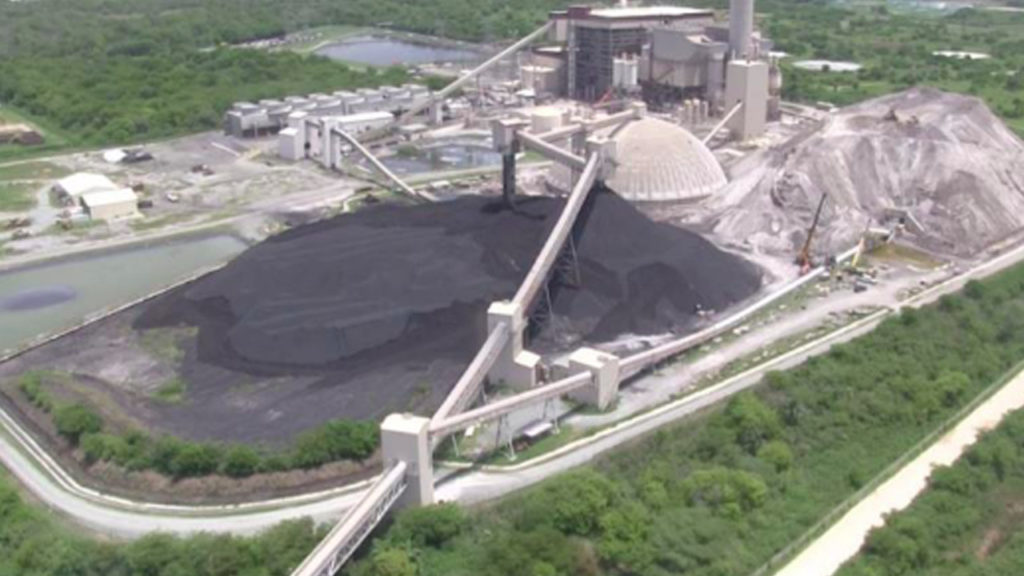 We are at the Puerto Rico Grid Conference, the second annual Grid Conference, which explores industrial solutions to Puerto Rico’s energy problems. And I’m here today with Ruth Santiago, a Puerto Rican attorney in private practice specializing, I understand, in environmental matters. Is that correct?

DIMITRI LASCARIS: Thanks very much for joining us today.

RUTH SANTIAGO: Thank you for being here.

So I’d like to start by generally discussing the generation of power here on the island. I understand that it’s essentially dependent on fossil fuels, is that correct? And if so, what is the distribution of sort of energy sources in electricity generation in Puerto Rico?

DIMITRI LASCARIS: And so, earlier, before we began the interview, you were talking to me about the problem of coal ash in Puerto Rico. Can you tell me a little bit more about that and who’s responsible for this?

RUTH SANTIAGO: Right. There is a coal burning power plant owned and operated by Applied Energy Systems, otherwise known as AES corporation. They are incorporated in Delaware but headquartered at Arlington, Virginia. They set up a coal burning power plant that was supposed to be a clean coal technology, the fluidized bed combustion, that has turned out to be anything but clean. It’s been, from the very beginning, a huge source of toxic emissions, and also, they generate about 300,000 tons of coal ash waste per year that has no known use.

DIMITRI LASCARIS: And lot of this was being dumped, or has been dumped in the Dominican Republic next door?

RUTH SANTIAGO: Right. Back at the beginning, AES Plant started operation in approximately November, 2002. They got their permits here in Puerto Rico to build and operate the plant on the basis of alleged beneficial uses for the coal ash waste. That never materialized, and so they started accumulating the coal ash waste at their plant site. It is now a mountain that you can see, that has actually contaminated the aquifer in that area.

And so, what they did back in 2003, 2004, they put together some kind of deal to transport the coal ash waste to the Dominican Republic. And actually, they apparently were only able to take like 50,000 tons or so to the Dominican Republic, but it created huge environmental damages and allegedly human illness, disease, and affected especially the reproductive systems of women and there was an uptick in children being born with deformities and all kinds of birth defects that are being connected to the AES coal ash.

DIMITRI LASCARIS: And tell us a little bit about AES and about the litigation that it’s confronted as a result of these health effects.

RUTH SANTIAGO: Right. Around 2009, I think, was the first lawsuit by the government of the Dominican Republic, and it was settled. AES denied liability but paid 6 million dollars to the government of the Dominican Republic for the damages related to the coal ash waste. Subsequently, there was another case filed, a group of cases, actually, filed by the actual plaintiffs, the residents of Arroyo Barril, which is the area in the Dominican Republic where the coal ash was dumped. And AES also had to settle that suit because it was ready to go to trial and there was lots of expert testimony indicating that the AES coal ash was the source of the damages to the plaintiffs mentioned.

RUTH SANTIAGO: Well, what we saw, obviously, after Hurricane Maria was that a hundred percent of the grid was down, 80 percent of the transmission and distribution system was impacted, was damaged, by the hurricane. And so, as everyone knows, for months and months, many people were without power. Ultimately, it took about eight months for the Puerto Rico Electric Power Authority to reestablish power to about 99 percent of the residents. In the meantime, people, communities, organizations, started moving on initiatives to generate energy and manage energy at the community level.

And so, a few of the projects that we’re involved with, that we’re helping out, are trying to do just that, to establish rooftop solar communities to generate energy. Because one of the things that we learned, one of the lessons that we definitely learned from the hurricane Maria aftermath, is that communities need to play an active role and not be just passive consumers, but rather, what are being called prosumers, that is producers and consumers of energy. They need to use rooftops, especially in places close to the point of views for installations of photovoltaic systems and battery energy storage systems, and to use demand response alternatives to manage energy use, to be very smart about energy use and management and generation.

DIMITRI LASCARIS: And based on your experience and the experience of the island, do you think that substantially increasing the proportion of power that’s generated by renewable energy is something that can be accomplished entirely by reliance on the private sector or do we need to see substantial government investment in this initiative?

RUTH SANTIAGO: Yeah, absolutely. We need we need government investment because the private sector will look for huge profits, which has traditionally been the case here. Puerto Rico is considered a high risk jurisdiction. And so, companies here come for the huge profits or not at all. And part of this conference is, quite frankly, is put on by the Puerto Rico Manufacturers Association, and they are constantly, if you listen in, they’re trying to get private investors to come here and invest. And so, I think we definitely need the government to actually not just promote a policy on the books and in the laws, but actually provide financing, provide support for communities that want to organize solar installations.

DIMITRI LASCARIS: Well, I’d like to thank you very much for talking to The Real News today.

DIMITRI LASCARIS: And we’re quite interested in following this story, so in the future, hopefully we’ll have an opportunity to speak to you again about the evolution of the energy crisis Puerto Rico has confronted particularly in the aftermath of Hurricane Maria. Thank you very much.

DIMITRI LASCARIS: And this is Dimitri Lascaris reporting from San Juan, Puerto Rico for The Real News.