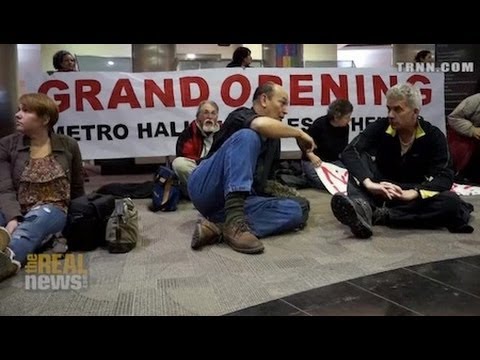 DYAN RUIZ, JOURNALIST: Last week, protestors occupied a city building because, they say, Toronto’s shelter system is over capacity and more people are dying on the streets.

GAETAN HEROUX, ACTIVIST, ONTARIO COALITION AGAINST POVERTY: We’re here today at Metro Hall because we have a serious crisis on our hands in the shelter system. We have a situation in this city where the capacity rate in shelters is running at 96, 97 percent, and I would argue often at 100 percent. And we have some bureaucrats and city politicians who refuse to acknowledge this. What we’re asking is that you address this overcrowding immediately.

RUIZ: During the protest, Mayor Rob Ford held a press conference at City Hall saying there is enough space in the shelters.

ROB FORD, MAYOR, CITY OF TORONTO: We don’t need more spaces. We have over 100 extra beds a night. We have to be efficient. Do you want to open up 500 empty beds? That’s just a waste of taxpayers’ money.

RUIZ: I’m here at Peter Street, where they have Toronto’s centralized intake for homeless shelters. Protestors say that shelters are full and people end up sleeping here on the chairs inside with no other place to spend the night. The city says there is no crisis in the shelter system. We took to the streets to find the real story.

DOUG JOHNSON HATLEM, STREET OUTREACH PASTOR, SANCTUARY: The outreach team that I’m on, nearly every time we call for somebody, there’s no beds available at that current time. And instead people are asked to come down and wait for a while at Peter Street for a bed, and usually that ends up being an all night wait with no beds becoming available. We’re hearing from people that work in shelters, very close friends that run shelters, that the beds are full every single night.

DION OXFORD, DIRECTOR, THE SALVATION ARMY GATEWAY: We have 108 beds, and we’ve been full ever since the middle of July. I don’t know why. And then when I asked around with the other men’s shelter directors, I heard that everybody went from a few empty beds to being very full, and then being asked on a regular basis by the city to open up any overlap, overflow beds that we might have. So we–at Gateway, we run ten overflow beds, usually used when the weather is extreme–either very, very hot or very, very cold, making it unsafe again to be outside, even more so. Our history has been never to have to use those except for extreme weather alerts, but now in the last six or so months, we get regularly called by the city to see if we can open up those overflow beds because there’s simply no space in the shelter system.

RUIZ: We talked to the manager of the city agency responsible for homeless shelters about concerns of a crisis in the system.

PATRICIA ANDERDSON, MANAGER, SHELTER, SUPPORT AND HOUSING ADMINISTRATION: I think that there’s a fulsome response to that in the staff report and that you should look there.

RUIZ: The report says “The City’s Shelter Management Information System shows that there are beds available every night and additional emergency spaces are available to be activated if the need arises.”

HATLEM: The City’s saying that there’s beds available. Sure, they’re magical beds, as I like to talk about it. They’re beds that the City can say that aren’t full and people aren’t sleeping in them. That’s because nobody ever gets to sleep in them. They cover the City’s behind in terms of saying the shelters aren’t full, but then they don’t actually give them to anybody to sleep in. They way it works is the City has to call up a shelter and ask them to put some cots in between their already overcrowded situation for extra beds. So the City doesn’t do that every night. But they still say that those beds were available.

RUIZ: The people we talked to aren’t the only ones saying shelters are full. A non-profit research organization, Social Planning Toronto, just released a survey asking 15 shelters how full they are. They found that in the past month, February 2013, “all shelters had to turn people away at least some of the time because they were full.” Last year, the City of Toronto’s budgeted shelter capacity fell short by nearly 10,000. Even with the full shelters, this year they’re decreasing shelter capacity or bed nights by over 41,000. Instead of keeping up with demand and increasing shelter capacity, the city cut it even more.

OXFORD: [incompr.] got a Mayor who thinks that he can cut 50,000 bed-nights in the city when we’re already overflowing. And it’s about a lack of compassion on the part of the politicians.

RUIZ: Not only has the city cut the budget for shelters; they and the province seem to have abandoned their roles in Toronto’s ten-year plan called Housing Opportunities Toronto. In it they say, “The best way to end homelessness is to provide people with permanent housing.” Now a major program to get people off the streets and out of shelters has been cut by the province.

OXFORD: They don’t fund any longer what’s called the Community Start-up Allowance, which was money to help men and women pay their first and last month’s rent up front, which now if that is no longer in place, which it’s not, then I believe that people will come into shelters and have a very difficult time getting back out, ’cause they don’t have the resources to get started again.

RUIZ: With the city failing to provide adequate housing, volunteers are helping the city’s homeless from falling through the cracks.

DENNIS BRUCE, CO-FOUNDER, OUT OF THE COLD: The program is called the Out of the Cold program. There are about 22 or 24 locations, mostly churches, and each are open one day a week. We have 60 mats that people sleep on. But we have a lot of other poor people who come into the program and come in to have dinner. When we started 18 years ago we saw it as a Band-Aid solution. We thought maybe we’d be in business for–I say business; it’s obviously a volunteer organization–that we’d be at work in this program for maybe 3 or 4 years. But as the years went by and the demand grew, it’s become kind of institutionalized. Our numbers have moved up steadily. We normally have got around 80 or 90 people here. It now averages out around 120. And three weeks ago we had 173 turn up for dinner and we had 78 stay overnight. So, it’s gotten very busy.

RUIZ: We talked to Dr. Steven Hwang, who researches the health of people who are homeless or vulnerably housed. He says the problem is much bigger than what you see on the streets.

DR. STEVEN HWANG, RESEARCHER, ST. MICHAEL’S HOSPITAL: People often think about homelessness as just being those people who are on the street or in a shelter tonight. But we know that for every one person who’s homeless there’s perhaps 20 people that are housed tonight but who were homeless recently or who are going to be homeless sometime soon. What our research shows is that those individuals are just as ill, often, as people who are homeless. Simply living and sleeping in a shelter increases your risk of getting certain diseases. And the second factor is just that the stress of living in a shelter has a very adverse impact on people’s mental health. And lastly, I think that often their pre-existing health problems get worse during the time that they’re homeless.

RUIZ: While the City report does recommend some efficiencies that can be made in the shelter system now, other concerns will have to be addressed later in spring/summer consultations. This will result in a report to City Council in the Fall. Meanwhile, advocates say life on the streets has and continues to take its toll.

BRUCE: If you go down to Holy Trinity Church, there’s a board outside there. I went down two or three years ago and there were 500 names on it. I’m told–I haven’t been down recently, but I’m told there are about 700 now. So, yes, there has been a spike of deaths on the street. And again the tragedy is that most of those people die unknown.

RUIZ: This is Dyan Ruiz for The Real News Network.