Is a Third Intifada On the Way?

Thousands of Palestinians protest the killing of an activist after interrogation in Israeli prison, as the cause of prisoner rights spreads throughout the Occupied Territories

Thousands of Palestinians protest the killing of an activist after interrogation in Israeli prison, as the cause of prisoner rights spreads throughout the Occupied Territories 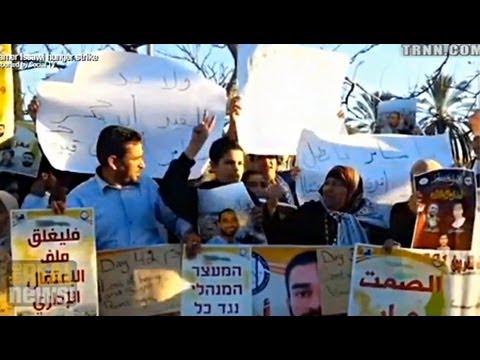 SHIR HEVER, ECONOMIST, ALTERNATIVE INFORMATION CENTER: In the elections that took place in Israel last month, the occupation of the Palestinian territories was pushed aside as a second issue. But the Palestinians under Israeli occupation have launched a series of mass protests over the past week, making them very difficult to ignore.

Back in OctoberÂ 2011, Prime Minister Netanyahu took pride in signing a prisoner exchange treaty with Hamas. Hamas agreed to release an Israeli soldier from captivity, and in exchange Israel agreed to release 1,027 Palestinian prisoners. The deal was reached after a great deal of public pressure was applied on the government to do anything in its power to achieve the release of the soldier.

The reason for the ratio of the exchange is that Israel keeps thousands of Palestinian prisoners in Israeli jails and makes hundreds of arrests every month. The Hamas fighters in Gaza had managed to capture a single Israeli soldier as a bargaining chip to secure the release of their imprisoned copatriots.

Although the prisoner exchange is taking place more than a year ago, its consequences now threaten to rattle Israel’s hold on the occupied territories. The Israeli military courts have implemented certain changes to the military legislature, which applies to the Palestinians in the occupied territories, even as the negotiations for the prisoner exchange were taking place. The new regulations specify that if a Palestinian who was released in a prisoner exchange is caught performing even a minor violation, they could be returned to jail to serve the entire remaining measure of their original sentence.

Yet the move by the Israeli military courts also demonstrates a worry that a sense of achievement among Palestinian activists could lead to weakening Israel’s hold over the occupied population. Samer Issawi from the occupied East Jerusalem, one of the 14 prisoners, has been arrested for being found in a neighborhood in East Jerusalem which he was prohibited to visit. Although no further accusations were made against him, he was facing nearly 30Â years of additional prison time. Issawi launched a prolonged hunger strike, and for 210Â days has subsisted only on water, salts, and food supplements. Several of the other prisoners have also launched long-term hunger strikes. After such a prolonged hunger strike, Issawi is at a severe risk to his life and likely to suffer from permanent damage to his health. But his protest was supported by demonstrations, and the public pressure has convinced the Israeli judge to order his release after 8Â months, rather than after 38Â years.

But another Palestinian prisoner, Arafat Jaradat, has passed away last Saturday in the Megiddo Prison in Israel. Jaradat was interrogated by the Israeli secret police, the ISA, and his death sparked a renewed wave of protest throughout the West Bank. The Palestinian Ministry of Detainee Affairs claims that Jaradat was tortured by his interrogators with sleep deprivation. On Sunday morning, nearly 5,000 Palestinian prisoners have sent back their meals, joining a mass hunger strike in protest of the mistreatment of Palestinian prisoners and the arbitrariness of Israel’s military law in the occupied territories.

While protests in the West Bank have been intensifying for over a week, the Israeli media has covered these protests as riots or public disorder, not mentioning the cause for the uprising. Only since last Friday was the message distributed in the mainstream media that this round of protests is centered on the rights of Palestinian prisoners.

During the delicate political time in Israel when Prime Minister Netanyahu is attempting to form his coalition and is trying to avoid calling for an additional round of elections, the Israeli government is not in a position to consider the long-term harmful consequences of heavy-handedness towards the uprising Palestinians. It is unlikely that the security officers who interrogated Arafat Jaradat will be investigated for his death, although it is possible that Netanyahu will order the release of some prisoners in an attempt to calm the protests.

Many protesters are saying that this could be the beginning of a third intifada, a Palestinian uprising against the Israeli occupation. It is still too early to tell if this is indeed the case or how long will the protesters be able to keep the momentum. It does seem clear, however, that the Israeli government does not have the luxury of ignoring the ongoing occupation, despite the wishes of most Israelis.