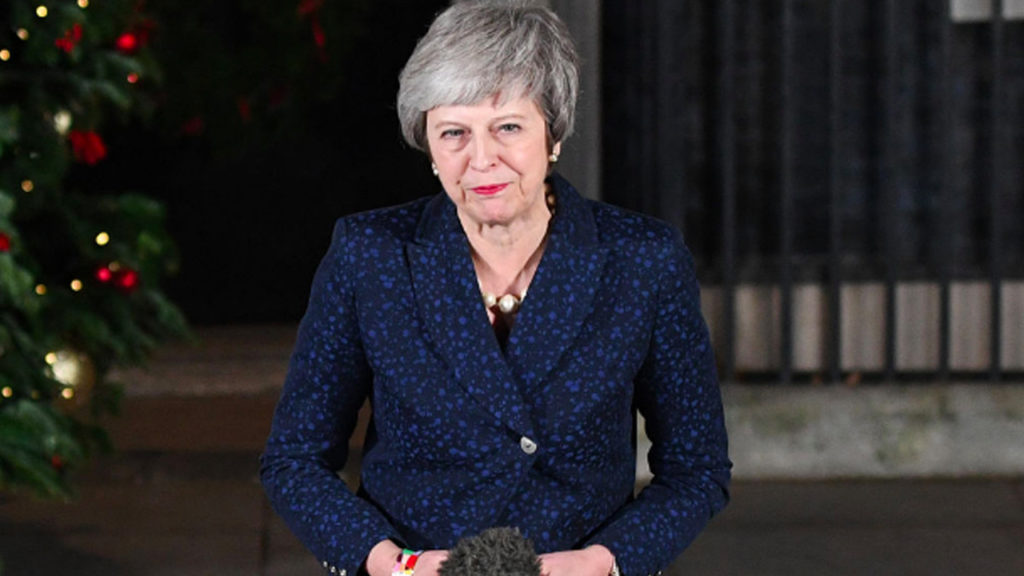 THERESA MAY: A change of leadership in the Conservative Party now will put our country’s future at risk and create uncertainty when we can least afford it. A new leader wouldn’t be in place by the 21st of January legal deadline, so a leadership election risks handing control of the Brexit negotiations to opposition MPs in Parliament. The only people whose interests would be served are Jeremy Corbyn and John McDonnell.

SHARMINI PERIES: But the question is, will she be able to stand the heat in the long run in the Conservative Party? The Prime Minister’s leadership was called into question on Wednesday when 48 Conservative MPs submitted letters calling for her to stand down, mainly over the Brexit deal negotiated with the EU that the Parliament was expected to vote on this week. In order to secure a non-confidence vote, Theresa May had privately announced that she will not stand for the leadership of the party at the next leadership conference.

To discuss all of this, he unfolding situation, I’m joined by co-director of Prime Economics in London Jeremy Smith. Jeremy, good to have you here.

All right. Jeremy, let’s start with why the Conservatives are so divided on the issue of Brexit, to the point that they are risking their own control of Parliament at the moment.

JEREMY SMITH: Yes, the Conservatives have for decades been split on Europe, with one wing which is generally relatively small, as you can see from the 48 signatories of the letter of no confidence. That’s broadly that group. They’re called the European reform group. Basically anti-European, at least in the sense of anti-EU. And they are for, generally speaking, for ultra-free markets and more deregulation, and I would say a greater tie-up in future with the Republican billionaire wing in the United States. It’s that sort of bit of the spectrum, I think you could say.

However, most of the Conservative Party, which a few decades ago was very pro-European, has moved certainly into a sort of, not in favour of the EU mode. They tend to be ones that will follow the line of business, and they know that a huge amount of British business and jobs are tied up in Europe, and that to suddenly break it open in a harsh way would be very damaging. And so they have tended in a more silent way to go, some of them, behind Theresa May, not all of them, on her deal. But they have a slightly, a very different view and think that a very hard Brexit where we just fell off the cliff would be too damaging.

SHARMINI PERIES: Now, give us a sense of why they chose this particular moment to call for a confidence vote.

JEREMY SMITH: The trigger, clearly, was that she had, we thought, promised to bring her withdrawal agreement deal to Parliament yesterday for it to have a vote on. And had she done so it would have been defeated, almost certainly, by a very large margin in Parliament. All the opposition parties against her, a large chunk of her own party. These are people against from different perspectives, some because they wish to remain in the European Union and want a second vote on that. The Labour Party, because it thinks it doesn’t go far enough to protect workers or environmental rights, and so on; workers’ rights. And then the European reform group, who, from their totally other position, want to leave in order to be able to trade more with the rest of the world, rather forgetting that our biggest market is on our doorstep.

So that triggered them into actually taking this move. It’s not necessarily been a wise move on their part. They’re not all–they nearly triggered this a few weeks ago. And then more or less announced it, and then found they hadn’t got the 48 signatures they needed to to do it. So it was only from last night that they got their act together, if that’s the right way of looking at it.

SHARMINI PERIES: Now, just prior to the vote, Labour leader Jeremy Corbyn demanded that there should be a vote on the Brexit deal that Theresa May has negotiated with the EU, but that didn’t happen. Let’s just listen to Jeremy Corbyn.

JEREMY SMITH: The Labour Party is, at least the Labour leadership’s main goal, is to try and get a general election so it can put its own manifesto not only on Brexit, but particularly on austerity. Because for loads of Labour Party people, and indeed for the economy, the austerity policies have been more serious or just as serious as the Brexit policies. So that’s the number one aim. A lot of Labour Party members and some, quite a lot of others, would support a second referendum, or really do not want to leave the European Union. So the country is still very much split 50/50, and the Labour Party reflects that, as well.

But I mean, Jeremy Corbyn was right in the sense that there was a clear political promise to bring it to Parliament for a vote. And indeed, by law there must be a vote on it before Brexit can take place. There are many of us who think that Theresa May’s whole strategy has been based on playing out time and trying to say you either fall off the cliff edge on March 29 Brexit day, or you vote for something which is 99 percent like the deal I’ve brought forward, maybe with a couple of brass knobs on, in the form of explanatory declarations that the European Union leaders are willing to add. So we think she’s playing just for time, essentially, at this point. And she was going to lose that one, and that would have put her in a difficult position, that vote. But she hasn’t got any different offer to make in January, if it’s going on till January. But time is running out.

SHARMINI PERIES: Jeremy, the critical question we are wondering on the side of the pond is, is there going to be another vote or another referendum on the Brexit?

JEREMY SMITH: At the moment I don’t see that there is. I’ve seen this as part of the armoury. It’s very divisive, and of course is a question of whether the only issues put forward, if there were to be one, would be do you vote for Theresa May’s proposed deal, or do you have a no-deal solution? But all of those actually arguing for the people’s vote, so-called, second referendum, of course want either–only two questions to be put: Theresa May’s deal, or to remain in the European Union by withdrawing the notice to leave that we’ve given. And many of those don’t want, even, to put the no-deal option on the table. I don’t think that’s realistic.

So the problem then is you would have three alternative possibilities being put on the table. Which has been done before in British referenda, but it is slightly more complicated. And of course there is a huge crowd, then, of those who who voted for Brexit before who say this is undemocratic, and not fair, and so on. So it’s very contested.

So the Labour Party’s position, given that loads of its members want to have a people’s vote but also want a Labour government, is to argue first to have a general election. To do that they need a vote of no confidence in the government, not in Theresa May. There’s a political one in the government. And unless the Northern Ireland unionists, the Democratic Unionist Party, vote with them, they–he’s not going to get a majority in the House, it would appear to to us.

So this is still to be played for. Can he–get to the point–he is being pressed by some within his own party, as well as so-called remainers in other parties, to put down a vote of no confidence in government now. But they know that he will lose it. The reason they want to put that forward is that then the Labour Party’s policy envisages the possibility of the referendum. The second referendum. Now, where is Jeremy Corbyn? One is playing it more cautiously, because he knows he will not just yet, and may not at all, win the no-confidence vote against the government.

So it’s got into a political sort of knot, really. So no one wants–hardly anyone wants the deal that Theresa May has brought forward. But there’s no other deal that has a majority. The 48 who triggered the vote of no confidence within the party against Theresa May nearly all want no deal, because they think that’s better; to fall out, suffer deep pain for a few months, and then be, in their views, free to deregulate.

SHARMINI PERIES: All right, Jeremy. Let’s leave it there for now.

JEREMY SMITH: Sorry it’s such a complicated political scene. The only thing I’d finally say is the one group that doesn’t seem too worried were the financial markets, which didn’t really blip today while all of this was going on.

SHARMINI PERIES: That’s true. I’ve been joined by the co-director of Prime Economics, Jeremy Smith. I thank you so much.