Lawmakers and military administrators are shifting baseline funding to the Overseas Contingency Operations (OCO) budget, which is exempt from mandatory cuts.

Lawmakers and military administrators are shifting baseline funding to the Overseas Contingency Operations (OCO) budget, which is exempt from mandatory cuts. 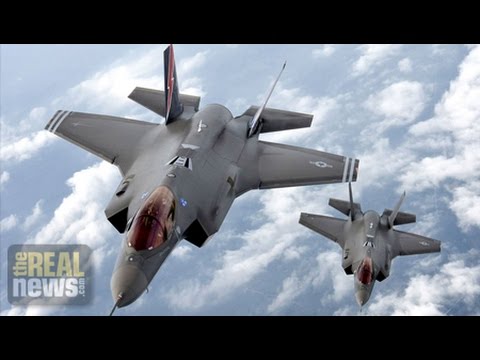 THOMAS HEDGES, TRNN PRODUCER: On Tuesday, the House unveiled a partial spending bill that would fund most of the government until September 2015 and at the same time delay a fight over President Obama’s executive action on immigration. Included in the bill is spending for defense, $521 million for baseline funding, and then another $64 billion for overseas operations.

WILLIAM HARTUNG, ARMS AND SECURITY PROJECT, CENTER FOR INTERNATIONAL POLICY: Pentagon’s regular budget is about $500 billion a year. But if you add about $17 billion for nuclear warhead work at the Department of Energy, you had more than $60 billion for the war budget, which is known as the Overseas Contingency Operations account, or OCO, if you look at veterans benefits, the cost of intelligence and Homeland Security, some of the interest on the debt that’s related to past military spending, you’ll get about double that figure. You’ll get up to about $1 trillion or more.

HEDGES: William Hartung is the director of the Arms and Security Project at the Center for International Policy and says that Congress and the Pentagon could effectively reduce spending if it was willing to face the military-industrial complex. Instead, last Tuesday the House and Senate together finished a defense authorization act that’ll shrink the Pentagon’s budget by targeting benefits. Military pay raises, for example, will be cut from 1.8 percent to just 1 percent. The military will also cap basic allowance for housing for several years and increase beneficiary co-pays for drug prescriptions that are filled off-base.

However, the one area of the Pentagon’s budget that’ll fare more lightly is Overseas Contingency Operations spending, or OCO, a category created after 2001 to fund the wars in Iraq and Afghanistan, and which is also exempt from sequestration cuts.

Lindsay Koshgarian is the research director at the National Priorities Project, a nongovernmental organization that informs the general public on how the defense budget in particular works. She says that baseline defense funding lost because of sequestration has found a new and more secretive home in OCO spending.

LINDSAY KOSHGARIAN, NATIONAL PRIORITIES PROJECT: It only goes back, has a history know of almost about 15 years. And it’s a dedicated pool of funding that was established to fund the Iraq and Afghanistan wars.

And the interesting thing now, as the U.S. has already left Iraq and is attempting to extricate itself from Afghanistan, even though that’s taking a bit longer than planned, the interesting thing will be to see what happens to OCO, to the war funding. And one thing that military budget watchers have noted with some alarm is that sequestration has affected all federal budgets. And as there is growing pressure around fiscal restraint or reducing federal spending, that OCO budget has really become a slush fund for the Department of Defense.

HEDGES: For a long time, the most salient example has been the F-35 joint strike fighter manufactured by Lockheed Martin at more than $600 million a plane and with a lifecycle cost of more than $1 trillion.

HARTUNG: The thing is not ready to fly, so there’s no way it’s going to be used in a conflict. This year the House blocked the attempt to put a few more there, which was to their credit. But in general it’s kind of an open season for putting weapons like that, which–there’s just not enough money under the caps that the Pentagon has. But they want [crosstalk] anyway cost overruns, so let’s just stick it over there.

And then the National Defense Authorization Act compounds that problem, because it puts things in like the EA-18 Growler, which is a version of the F-18, which is built by Boeing in St. Louis, Missouri, area. That production line was going to close down. So they stuck these EA-18s in there to keep that production line open, even though the Pentagon did not want that system.

They’ve done similar with M1 tank upgrades to help keep a plant at Ohio going. They’ve prevented the Army National Guard from retiring some helicopters that would be at some of their bases.

In all, they added about a dozen–[it amounted to about (?)] a dozen programs beyond what the Pentagon was looking for. And then they did some funny money accounting–well, we’ll change our foreign exchange equations and we’ll take out of unobligated balances from other years. So, basically, they’ve sort of done this budgetary sleight of hand where the savings that they’re supposed to be getting to replace the money that they’re adding are kind of soft.

HEDGES: But while the Pentagon has almost always protected high-tech weapons programs like the F-35, it has in the past few years recognized the need for reevaluating costs of operating bases at home and abroad, also known as Base Realignment and Closure Assessment, or BRAC. In November, Deputy Secretary of Defense Robert Work expressed his frustration with those costs in particular. “Imagine,” he said, “the largest private-sector companies being forced to maintain 24 percent of excess overhead. They’d be out of business in a heartbeat. Their shareholders simply would not stand for it”.

But Congress has resisted a new ground of BRAC, even though cutting back on expenditures tied to maintaining our 700 or so bases worldwide could save the U.S. tens of billions of dollars each year.

KOSHGARIAN: And that’s something that’s a holdover, really, from the Cold War, when the United States established many, many military bases in the United States and abroad. And a lot of those bases are probably no longer militarily necessary. And the Pentagon has acknowledged that very openly. The Pentagon has actually asked for another round of BRAC, so another round of potential base closures. But Congress has been denying them and saying, basically, that we won’t let you close these bases. And it does often come down to jobs.

One ironic thing about that is that it’s not as many jobs as it used to be, especially on the side of defense contracts. So, for instance, the biggest defense contract in the United States right now and for many years running has been Lockheed Martin. Well, Lockheed has cut down a tremendous number of jobs in recent years, despite the fact that they’re getting more military contract dollars than ever. So what Congress is doing is throwing increasing dollars at these contractors for a diminishing number of jobs in some cases.

HEDGES: Hartung and Koshgarian both argue that the compounded interests of Congress and the Pentagon have created a structure whereby corporate contracts that equip the military with high-tech weaponry are enshrined even in times of austerity.

HARTUNG: It’s ironic, because there’s a program to help communities adjust to things like base closures, called the Office of Economic Adjustment in the Pentagon. And at the same time they are refusing to close bases, they’re cutting money for that adjustment program.

And in the past, communities that have had bases closed over a number of years have actually generated more jobs in other sectors than they had when they had the military base. So they’re going about this entirely backwards, not only in terms of security, but in terms of long-term economic prosperity.

HEDGES: While few in number, groups have taken advantage of the program that the Pentagon’s Office of Economic Adjustment has to offer. The Connecticut machinist union, which represents more defense workers in that state than any other union, for example, has stepped beyond the neutral language of jobs and asked whether certain jobs are needed more than others.

HARTUNG: The machinists supported the creation of a commission on Connecticut’s economic future, which was precisely designed to look at alternative industries, alternative investments, so that Connecticut’s dependence on the Pentagon could be reduced over time.

As it is, at least until recently, Connecticut had the highest per capita reliance on the Pentagon of any state in the country because they build submarines there at the Electric Boat plant. They build helicopters for the military. They build aircraft engines. So the idea here would be, let’s have a Plan B, so that these kinds of ups and downs of Pentagon spending don’t rock Connecticut’s economy.

And, of course, it would also create a little bit of freedom for local representatives. If they knew that their economy could be secured in other fashions, perhaps they wouldn’t fight so hard for systems that in some cases the Pentagon isn’t even requesting.

HEDGES: Last year, Connecticut obtained a planning grant from the office of economic adjustment and funded a state commission, part of whose mandate it is to diversify the states overly defense-dependent economy.

Miriam Pemberton is a research analyst at the Institute for Policy Studies. She also testified in front of commission.

MIRIAM PEMBERTON, RESEARCH FELLOW, INSTITUTE FOR POLICY STUDIES: The bill to create this commission went nowhere until the machinists union supported it. They said it makes perfect sense to figure out how to make this transition.

HEDGES: In 2007, IPS commissioned the University of Massachusetts to produce a report that looked at how a $1 billion investment in various sectors of the economy affected job figures.

PEMBERTON: The military came out the worst job creator all of those, including just giving it back to people. So it turned out, and the number–they’ve repeated the study several times, and the proportions stay constant, but the job numbers change a little bit. But, basically, if you put $1 billion into the military, you generate about 11,000 jobs; if you put it into transportation, you generate about 17,000 jobs; put it into education, about 26,000 jobs. So there are a lot of reasons for this, but you know among them is that the military is much more capital-intensive and education is much more labor-intensive. And so you can create more jobs in education than by investing in the military.

HEDGES: As is often the case, the future of defense spending depends on the erratic trends of politics and military operations abroad. Obama’s $5.6 billion request to fight ISIS, the Republican takeover of the Senate, and the nomination of Ashton Carter as Secretary of Defense are all developments that should be watched closely in the coming months.

But among these variables, one area of defense will most likely remain consistent. That’s the purpose OCO, or the war budget, will serve of incorporating and then shielding defense spending from any cuts due to sequestration.