Protestors celebrated Friday as the House voted against a companion bill to the President's Trade Promotion Authority, a huge setback for pro-TPP advocates.

Protestors celebrated Friday as the House voted against a companion bill to the President's Trade Promotion Authority, a huge setback for pro-TPP advocates. 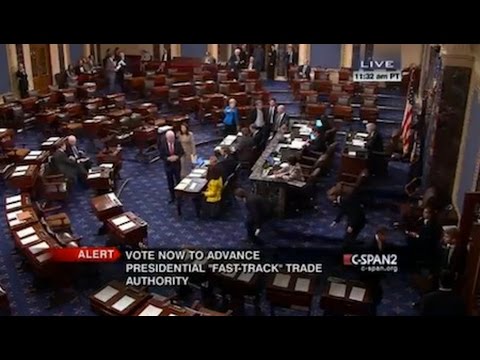 THOMAS HEDGES, PRODUCER, TRNN: Victory for anti-TPP demonstrators Friday as the U.S. House of Representatives struck down a companion bill to the Trade Promotion Authority, also known as fast-track.

HEDGES: Despite a rare visit from President Obama to the Capitol Friday morning, Democrats decided not to follow through on the President’s wish to pass legislation that would open the floodgates to the hotly debated Trans-Pacific Partnership agreement, or TPP.

KEVIN ZEESE, ANTI-TPP ORGANIZER: If you had told me that we were going to win by 302, I was thinking a single-digit victory at best, squeaking it out. Without TAA, it doesn’t become law. And Monday night or Tuesday they could come back for a re-vote on TAA. So the key is to keep the Democrats in the same position they are.

HEDGES: However, representatives seemed a bit more cautious about news the mainstream media and grassroots movements say is clearly bad for the TPP.

INTERVIEWER: Congressman, what do you think is going to happen now, with TPA? Is it going to be tough, or?

REP. BLACK FARENTHOLD (R-TX): It’ll be interesting to see what happens on Tuesday.

INTERVIEWER: Okay. Are they going to change TAA provisions within TAA to help it pass?

FARENTHOLD: No. It was a motion to reconsider, which means they’ll bring TAA back up on Tuesday.

INTERVIEWER: Oh, okay. And then one–do you think that’s going to pass? Do you have any opinions on that? Or it kind of depends how it’s–.

FARENTHOLD: That’s kind of in the Democrats’ hands. TAA was kind of their baby in the Senate. The vast majority of the Republicans I don’t think are supportive of TAA. But we’ll see what happens on Tuesday.

INTERVIEWER: But in any case there’s complications.

ZEESE: Oh, it’s [incompr.] No, what we want, what we want to see happen is we want to see this defeated, and we really want to try to keep this great coalition together. People like us who, we consider ourselves more than progressives or liberals. You know, people like us trying to pull the more traditional groups to really take a very transformative position. And I think they’ll be very comfortable in it when they see it, you know, when they see they can win it.

I think we’re showing we can win it. We won the net neutrality fight against the telecoms, which seemed impossible. Now we’ve beaten all the biggest corporations in the world, the top–you know, there were 600 corporate advisors. Monsanto, Bank of America, JP Morgan, Halliburton, all the biggest were against us on this. We were against the Republican leadership, we were against the White House. For this coalition to win that should give a sense of potential power.

This affects everybody. And now everybody has [beaten] the most powerful. We should recognize our power and build on it.