“Insanity”: Critics React to the Troop Increase in Iraq

The Real News spoke to former Army Lt. Col. and Iraq vet Daniel Davis, journalist Dahr Jamail and policy expert Stephen Miles about the recent decision to build a new military base and send some 500 'advisors' to the Anbar province.

The Real News spoke to former Army Lt. Col. and Iraq vet Daniel Davis, journalist Dahr Jamail and policy expert Stephen Miles about the recent decision to build a new military base and send some 500 'advisors' to the Anbar province. 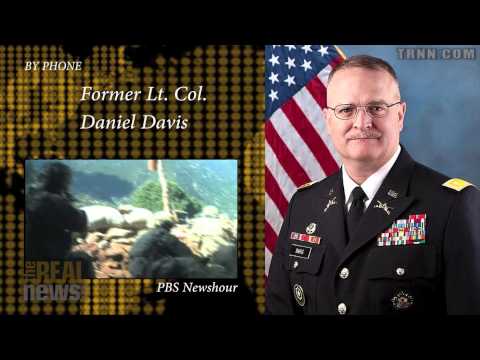 The White House announced Wednesday that it would prop up a fifth base in the Anbar province of Iraq, where an additional 450 troops will be stationed, and train Iraqi security forces in the fight against the Islamic State. President Obama said at the G7 summit Monday that a team of advisors would help a reluctant Iraqi military to become more resilient and effective.

PRESIDENT BARACK OBAMA: One of the areas where we’re going to have to improve is the speed at which we’re training Iraqi forces.

The Real News spoke to three critics, one a journalist, another a policy expert, and finally, a recently retired lieutenant colonel in the Army, about their reactions to the news of yet another surge.

STEPHEN MILES, ADVOCACY DIRECTOR, WIN WITHOUT WAR: So my first reaction is that it’s more of the same. This total, this deployment of about 500 troops will bring U.S. presence in Iraq to about 3,500 troops. But what this really is is a continuation of trying to solve this problem militarily.

DAHR JAMAIL, JOURNALIST, AL JAZEERA: It reminds me of the infamous quote of, you know, one of the definitions of insanity is doing the same thing repeatedly expecting different results. And how is this not that?

FORMER LT. COL. DANIEL DAVIS: Now, in 2009 I served as a U.S. advisor to an Iraqi battalion, so I do have some experience at understanding how an advisor is going to improve the tactical fighting capability of the Iraqi forces, and it’s not very much. In the 2004 second battle of Fallujah, it took two months, and more than a division worth of our best combat troops with all of our equipment with everything in the world at stake, and it still took two months to get that done. And now what does somebody think that 400 advisors are going to do to change the nature of the tactical situation in Iraq?

The news comes at a time when the White House and other officials in Washington have blamed the Iraqi government for being sheepish in the fight against the Islamic State.

– The Iraqi forces just showed no will to fight.

DAVIS: So if the Iraqi troops don’t have the same fervor and the same passion to win, then it’s not going to make any difference in the world how many American advisors go over there.

JAMAIL: You know, it’s consistent with the way the U.S. has handled it from the beginning invasion back in 2003. It was easier to blame the Iraqis than take full responsibility for creating the conditions of this whole disaster in the first place.

MILES: And this gets to the core of the American side’s failure, which really is truly a failure for decades, now. For 25 years in Iraq. We’re failing to put forward visions of an Iraq. We’re listening to Iraqis about the vision of an Iraq that they have for the future of their country. We continue to try to impose solutions on Iraq from here in Washington, and we continue to get it wrong.

DAVIS: What does somebody think that 400 advisors are going to do to change the nature of the tactical situation in Iraq?

JAMAIL: There will be an inevitable escalation, because what happens once mortars start getting lobbed into this base, and a few U.S. military personnel get killed? How is that not going to escalate the situation?