In recent weeks, the Trump administration has taken on a much more aggressive tone towards whistleblowers and groups like Wikileaks, calling them 'hostile intelligence services' and saying that Julian Assange's arrest is a 'priority'

In recent weeks, the Trump administration has taken on a much more aggressive tone towards whistleblowers and groups like Wikileaks, calling them 'hostile intelligence services' and saying that Julian Assange's arrest is a 'priority' 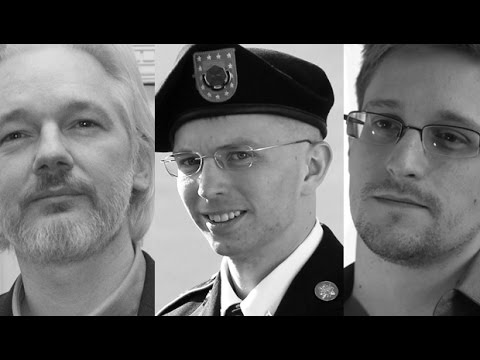 SAM HUSSEINI: Thank you all for joining us today…

THOMAS HEDGES: On Friday, advocates for the protection of whistleblowers spoke in the nation’s capital to denounce the government’s increasingly aggressive stance towards those who want transparency and accountability. In early April the Director of the Central Intelligence Agency, Mike Pompeo, said in a statement that people, such as Edward Snowden, Chelsea Manning, and founder of WikiLeaks, Julian Assange, threatened national security, by using information to promote themselves, and their own interests, over those of the public.

MIKE POMPEO: As long as they make a splash, they care nothing about the lives they put at risk, or the damage they cause to national security. It’s time to call out WikiLeaks for what it really is — a non-state, hostile intelligence service, often imbedded by state actors, like Russia.

At the press conference last week, advocates such as former CIA analyst and whistleblower, Ray McGovern, and retired U.S. Army Colonel, Ann Wright, along with others, gathered in front of the Justice Department to rebut the government’s assessment of work they say is clearly in the interests of the public.

ANN WRIGHT: We are here to say that to our Justice Department, and to our whole law enforcement team, there are criminals out there, that’s for sure. But it’s not Julian Assange, and it’s not Ed Snowden, it’s not Chelsea Manning, it’s not Thomas Drake. Those are the people that exposed the criminal acts of the government, and we’re here to tell the Justice Department to clean up your own act, and to prosecute those that actually have committed crimes, and leave Julian Assange alone.

THOMAS HEDGES: But the U.S. government isn’t the only one with a critique of Assange. Others, including liberals, have argued that the manner in which WikiLeaks released troves of information, often felt reckless, and even agenda-driven, especially with regards to Hillary Clinton’s campaign.

But on Friday, speakers said that while that sort of criticism may, in fact, have some validity. It missed the larger point of standing up for Assange, and WikiLeaks, which is that defending them is about standing up for the First Amendment, and against any precedent the government might set, and legal retribution towards journalists.

SAM HUSSEINI: There have been a lot of people, and there needs to be more people, speaking out, who have had disagreements with WikiLeaks, but see this as a pernicious treat to the First Amendment in general. And the part of the fear, I think is, that a lot of journalists who are not heroes are already silent; and that the tentacles of the Department of Justice, if they are able to prosecute individuals, they will also prosecute those who are heroes. And be faced with criminal prosecution, which is a very effective form of silencing the media.

THOMAS HEDGES: That point was bolstered by former military analyst and whistleblower, Daniel Ellsburg, whose claim to fame was releasing the Pentagon papers — an action President Nixon tried to denounce. But which over time has fared well with the public, in its efforts to expose the atrocities of the Vietnam War, and ultimately bringing it to a close.

In a parallel statement, he said in defense of Assange, Snowden, and Manning, that, “If journalists and publishers fail to call this out, denounce and resist it — on the spurious grounds that Julian is ‘not a real’ journalist like themselves — they’re offering themselves up to Trump and Sessions for indictments and prosecutions, which will eventually silence all but the heroes, and heroines, among them.”

The news conference also comes just days before Chelsea Manning’s scheduled release from prison. Manning who was detained in 2010, and then convicted in 2013 of violating The Espionage Act, disclosed some 750,000 low level classified documents that exposed how the U.S. military in Iraq had committed a number of atrocities, and potential war crimes.

SAM HUSSEINI: Chelsea Manning will be released on May 17th; who of course, released the collateral murder video, which showed criminality, and the cables regarding U.S. conduct in 2006, saying, “Well you know, we really should use the Shiite-Sunni schism in Syria to our advantage.” Leading to those kinds of policies leading to civil war in Syria.

Utter disaster, for hundreds of thousands. For millions of people, foreshadowed by internal U.S. government documents. And I think that that’s a good deal of why WikiLeaks is so annoying to those in power.

ANN WRIGHT: Chelsea Manning was horrified by what she saw of the U.S. military killing Reuters’ reporters, journalists. And it was WikiLeaks, Julian Assange, and those who formed WikiLeaks, that were so instrumental in moving the message that we have from Whistleblowers, to include Ed Snowden.

Ed Snowden, who is now in Russia for having disclosed a tremendous amount of information about the eavesdropping and spying our government, the U.S. government, was doing on people around the world, and to include us as U.S. citizens, violating the laws; violating the laws — both under the Bush Administration and the Obama Administration — with the wholesale collection of electronic data on every person on this Earth.

RAY McGOVERN: The hacking issue is a canard, okay? It’s an issue raised by sore losers, people who can’t conceive of the possibility that Hillary Clinton lost the election because she was a fatally flawed candidate that nobody trusted. It couldn’t be that, no, and so, they started even two days before the Democratic National Committee to blame it on the Russians — the hacking would be blamed on the Russians.

And ever since then, the mainstream media has fallen in line, and they’ve diverted attention to what those emails say, and what they say folks, is simply: that Hillary Clinton and her colleagues at the Democratic National Committee stole… stole, the nomination from Bernie Sanders.

That, I think, is why you had a leak. I think there was a young Democratic National Committee worker, who said, “You know, man, this is beyond the pale. I was a Bernie supporter. I don’t work for Hillary, but man, what corruption. She cheated him out of the nomination. I’m going to send this little thumb drive to Julian Assange.” That’s what happened.