Low-wage workers across the nation came out and demanded a $15 an hour living wage. TRNN's Thomas Hedges spoke to protesters in the nation's capitol about the day of action.

Low-wage workers across the nation came out and demanded a $15 an hour living wage. TRNN's Thomas Hedges spoke to protesters in the nation's capitol about the day of action. 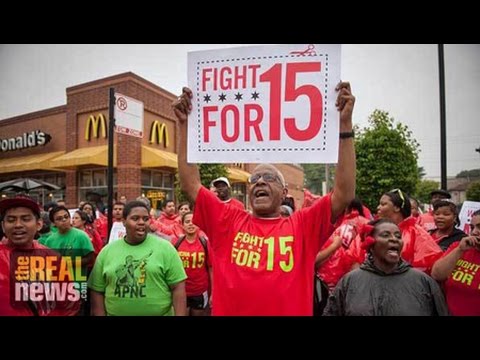 THOMAS HEDGES, PRODUCER, TRNN: On Wednesday low-wage workers and their supporters rallied and picketed in over 230 cities across the country, including right here in Washington D.C.’s Freedom Plaza.

DELVONE MICHAEL, EXEC. DIR. D.C. WORKING FAMILIES: This is incredible energy today. This is the largest mobilization probably in the history of the labor movement. Wages have been stagnant since 1968. It’s been far too long for us to get back on the right page so we can respect people.

HEDGES: Protesters are using tax day as a way to tell corporations that it’s grossly unjust for them to receive lavish tax breaks and tax subsidies while the rest of the country stagnates.

HEDGES: Since 2012 low-wage workers, particularly in the fast food industry, have been hitting major cities with marches, walkouts, and protests demanding a living wage of $15 an hour. They also want better working conditions and the right to unionize. But protesters occupy all sectors, from airport workers to adjunct professors to students. Today was the community of home care workers that came out to Fight for $15.