The Senate Homeland Security Committee said that crime is driving the recent uptick in immigration to the U.S., while ignoring the effects sweeping trade deals like NAFTA and CAFTA

The Senate Homeland Security Committee said that crime is driving the recent uptick in immigration to the U.S., while ignoring the effects sweeping trade deals like NAFTA and CAFTA 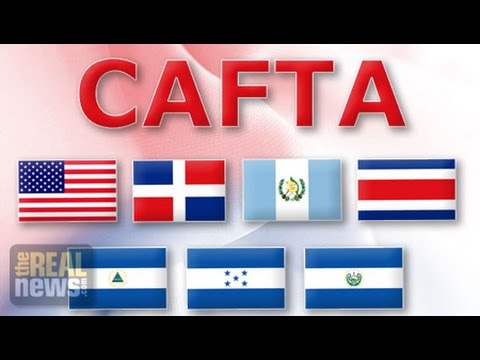 THOMAS HEDGES, PRODUCER, TRNN: Rising migration, poverty, and crime in Central America over the past three years have prompted lawmakers here in the United States to reassess immigration policy. Conservatives are pushing for an emphasis on border security and tackling the drug trade. Democrats want to ease deportations and move forward on comprehensive immigration reform.

But are both ignoring what some say is the largest factor behind these worsening conditions? The twenty years of so-called free trade agreements with our neighbors to the South.

Last week, senators on the Hill focused instead on crime. Roger Noriega of the conservative American Enterprise Institute said that Obama’s executive action on rolling back deportations along with other reform measures have been a boon to criminals, among them immigrant smugglers.

ROGER NORIEGA, AMERICAN ENTERPRISE INSTITUTE: Last summer my contacts in Central America reported brazen radio advertising by alien smugglers drumming up business by claiming that a new permiso was being issued to minors reaching U.S. territory. The increased number of persons being allowed to stay pending hearings under the Trafficking Victims Protection Act appears to be the origin of this campaign, and the June 2012 decision by President Obama to defer removal action of childhood arrivals also fueled expectations of mass legalization.

HEDGES: That point of view was coupled with the argument that government actions were fundamentally flawed, and that progress could only come through the growth of private industry in Latin America.

ADOLFO FRANCO, FMR. ASSISTANT, U.S. AGENCY FOR INT’L DEVELOPMENT: Suffice it to say, Mr. Chairman, for many decades the American taxpayer has been extraordinarily generous in helping our neighbors overcome the challenges they have faced. I have learned the simple fact that American cannot solve our neighbors’ problems. The fact is the government cannot create wealth, and the government cannot develop underdeveloped societies. Economic growth can only come from a vibrant private sector.

HEDGES: But the major 1994 North American free trade agreement did exactly that; it knocked down the barriers between small Mexican business and large American corporations, most notably in the agriculture industry. Small-time Mexican farmers suddenly had to compete with American agribusiness, putting many of them out of work and eventually driving them into the United States to find new jobs.

In 1993, billionaire and presidential candidate at the time Ross Perot warned against the deal on CNN.

ROSS PEROT: When you’ve got a seven-to-one wage differential between the United States and Mexico, you will hear the giant sucking sound. There’s a political lesson, there’s a business lesson.

HEDGES: Ten years later in 2004, critics consider the NAFTA deal a failure. Nobel Prize-winning economist Joseph Stiglitz called NAFTA a broken promise in an op-ed for the New York Times, pointing out that while the hope was that NAFTA would reduce income disparities between the United States and its southern neighbor, in fact they’ve grown by 10.6% in the last decade. Meanwhile, real wages have been falling at the rate of 0.2% a year.

2004 was the same year that the United States lead the effort to expand NAFTA-style trade to five other Central American countries. It was the Central American Free Trade agreement, or CAFTA, that came out of that effort. NAFTA and CAFTA would serve as the basis for future trade deals, including the ongoing Trans-Pacific Partnership, and Transatlantic Trade and Investment Partnership agreements today, which many have said is a trade policy based on corporate welfare and not on free market principles.

RON PAUL, FMR. CONGRESSMAN: It’s government management of trade for this special interest. It’s not really free trade. There are more requests from our government to NAFTA to raise tariffs — you know, we want protectionism, but you’re a big corporation, you might get some protection from that. Free trade is different.

HEDGES: The series of hearing this week focused on a different narrative. For example, the Homeland Security Committee used the language of crime to set an agenda for targeting countries that are straying from the structure of so-called free trade. El Salvador, a country member of CAFTA that in recent years has pushed back against American economic dominance in Latin America, has faced a backlash from lawmakers in the United States. The elections of 2009 and 2014 saw the resurgence of the left-wing FMLN party, which poses a threat to U.S. hegemony n the region.

NORIEGA: March 1st they held an election for Congress … it went more than two weeks before they could even give the first results. So you’re supposed to have the rule of law and democracy; they can’t even hold an election. And the suspicion everybody has is that the government was figuring out how many people they wanted in Congress.

So I mentioned before the senior folks involved in money laundering billions of dollars for the FARC, the FMLN making get out the vote packs with the Mara Salvatrucha gang. I mean, there’s something seriously wrong there. And I think if you want to start somewhere, look at what’s going on in El Salvador, and that’s where we ought to see if we can have some real accountability.

HEDGES: Pro-CAFTA supporters like Noriega are targeting other countries as well, where leftist movements threaten American trade policy. Honduras, Guatemala, and other underdeveloped countries have been subjected to the same frequent and destabilizing American intervention for the better part of a century, both military and economic.

DANA FRANK, UNIV. OF CALIFORNIA, SANTA CRUZ: When we talk about the fleeing gangs and violence, it’s also this tremendous poverty. And poverty doesn’t just happen. It itself is a direct result of policies of both the Honduran government and the U.S. government including privatizations, mass layoffs of government workers, and a new, in Honduras, a new law that’s now made permanent that breaks up full-time jobs and makes them part-time and ineligible for unionization, living wage, and the national health service. And a lot of these economic policies are driven by US-funded lending organizations like the International Monetary Fund, the World Bank, and the Inter-American Development Bank, which itself is funding the corrupt Honduran police.

HEDGES: The Senate talks this week reiterated the old diplomatic approach to countries in Latin America, whereby U.S. corporate interests deepen their foothold in those smaller economies through coercion. We can expect Congress, along with the White House, to use the economic weapons of financial aid packages, trade rules, and international tribunal courts, as opposed to the more literal weapons of the 1980s under Reagan, to push countries like El Salvador into submission.