Republicans along with many progressive groups oppose the reform, arguing that it's a front for keeping wages low in the Information Technology sector by bringing in cheap labor from abroad

Republicans along with many progressive groups oppose the reform, arguing that it's a front for keeping wages low in the Information Technology sector by bringing in cheap labor from abroad 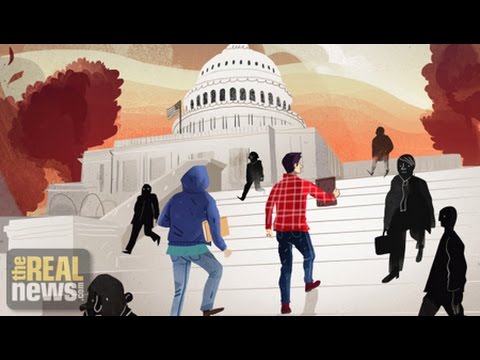 THOMAS HEDGES, TRNN PRODUCER: On Tuesday, the Senate Judiciary Committee met to discuss immigration reform concerning high-skilled foreign workers. Many in Congress want to increase the number of H1-B visas it issues for immigrants seeking tech industry jobs in particular. While most Democrats support the measure, Republicans oppose the legislation, because they say it would put American jobs and wages at risk.

SENATOR CHARLES GRASSLEY (R-IOWA): Most people believe that employers are supposed to recruit Americans before they petition for an H1-B worker, or that they’re supposed to hire a U.S. worker if that person is equally or better qualified. And of course, we’ve found out that’s just not true. Over the years the program has become a government-assisted way for employers to bring in cheaper foreign labor.

HEDGES: Progressive groups like the Economic Policy Institute are siding this time with Republicans, arguing that reform is a ploy to reduce employee wages. Last month that argument became reality when the electric utility company Southern California Edison replaced some five hundred of its IT workers with H1-B workers from India. Ron Hira of the Economic Policy Institute said in his testimony before the committee that the massive layoff was emblematic of the issue at large.

HEDGES: Reform efforts for high-skill workers began two years ago when Silicon Valley leaders like Bill Gates and Mark Zuckerberg launched a fierce lobbying campaign to push Washington Democrats to open the floodgates for additional labor. They argue that America’s tech industry has seen a shortage of applicants in the last decade. However, in a report from PBS News Hour from 2013, Rutgers professor Hal Salzman, who also testified on Tuesday, found that assertion to be false. He found instead that U.S. colleges graduate far more scientists and engineers than find employment in those fields every year, about two hundred thousand more, while the IT industry fills about two thirds of its entry-level positions with guest workers.

Jay Palmer is a whistleblower who in 2012 stepped forward over the process of training those guest workers. He told the committee on Tuesday that as a consultant for an IT company called Infosys he saw how the driving factor behind recruiting H1-B visa workers was not about immigration rights, but rather an effort to degrade wages within the country by exploiting not only foreign workers, but the middle class Americans who were training them and then subsequently being replaced.

JAY PALMER: We brought in H1-B workers, didn’t matter if you had skills or not. We brought them in, I set them in cubicles and watched the Americans train them, only in the name of the dollar. I’m here to day to talk a little bit about who can’t be here today and talk. I am the displaced American worker that can’t speak out due to being harassed, blackballed, or possibly sued. The one who is forced to sign the non-disparaging marks agreement in order to get a severance package. The employee that my company chose not to invest in, but in order to replace me with cheaper labor. Cheaper labor that I had to train. Train to do my job, that I learned over the past fifteen or twenty years. They call it knowledge transfer, but we all know that’s an illusion. It’s all about cheaper labor. I read a statement that companies had come to certain senators and said we don’t have enough skilled workers. Send me the companies. I’ll send you workers.

In closing, I watched this on a daily basis, of Americans being displaced. I sat in the offices in meetings with companies that displaced American workers, only because the Americans that had been there fifteen or twenty years were being paid too much money. I stayed at night and helped these people that came over on H1-Bs learn skills. They’re not skilled workers. These companies bombard our system with H1-B applications, and whoever gets them, they’re sent over no matter their skill level. I know, I watched it.